Facebook’s Instant Games are now open to all developers, Facebook announced this week in advance of the Game Developers Conference. First launched in 2016, the platform lets developers build mobile-friendly games using HTML5 that work on both Facebook and Messenger, instead of requiring users to download native apps from Apple or Google’s app stores.

The Instant Games platform kicked off its launch a couple of years ago with 17 games from developers like Bandai Namco, Konami, Taito, Zynga and King, who offered popular titles like Pac-Man, Space Invaders, and Words with Friends. The following year, the platform had grown to 50 titles and became globally available. But it wasn’t open to all – only select partners.

In addition to getting users to spend more time on Facebook’s platform, Instant Games provides Facebook with the potential for new revenue streams now that Facebook is moving into game monetization.

In October, Facebook said it would begin to test interstitial and rewarded video ads, as well as in-app purchases. The tools were only available to select developers on what was then an otherwise closed platform for Facebook’s gaming partners.

Alongside this week’s public launch, Facebook introduced a handful of new features to help developers grow, measure and monetize their games.

This includes the launch of the ads API, which was also previously in beta.

In-app purchases, however, are continuing to be tested. 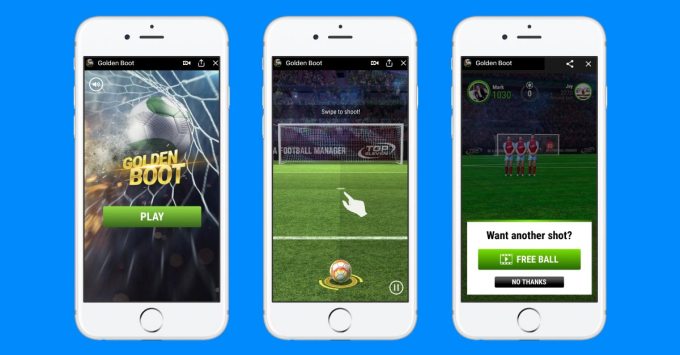 Developers will also have access to Facebook’s Monetization Manager, where they can track manage ads and track how well ad placements are performing; as well as a Game Switch API for cross-promoting games across the platform, or creating deep links that work outside Facebook and Messenger.

Facebook says it also updated how its ranking algorithm surfaces games based on users’ recent play and interests, and updated its in-game leaderboards, among other things.

Soon, Instant Game developers will be able to build ad campaigns in order to acquire new players from Facebook. These new ad units, when clicked, will take players directly into the game where they can begin playing.

Since last year, Facebook Instant Games have grown to nearly 200 titles, but the company isn’t talking in-depth about their performance from a revenue perspective.

It did offer one example of a well-performing title, Basketball FRVR, which is on track to make over 7-digits in ad revenue annually, and has been played over 4.2 billion times.

With the public launch, Facebook is offering Instant Games developer documentation page and a list of recommended HTML5 game engines to help developers get started. Developers can then build and submit games via Facebook’s App page.