A massive company probably has plenty of engineers on staff and the resources to build a complex backbone of interconnected information that can contain tons of data and make acting on it easy — but for smaller companies, and for those that aren’t technical, those tools aren’t very accessible.

That’s what convinced Howie Liu to create Airtable, a startup that looks to turn what seems like just a normal spreadsheet into a robust database tool, hiding the complexity of what’s happening in the background while those without any programming experience create intricate systems to get their work done. Today, they’re trying to take that one step further with a new tool called Blocks, a set of mix-and-match operations like SMS and integrating maps that users can just drop into their systems. Think of it as a way to give a small business owner with a non-technical background to meticulously track all the performance activity across, say, a network of food trucks by just entering a bunch of dollar values and dropping in one of these tools.

“We really want to take this power you have in software creation and ‘consumerize’ that into a form anyone can use,” Liu said. “At the same time, from a business standpoint, we saw this bigger opportunity underneath the low-code app platforms in general. Those platforms solve the needs of heavyweight expensive use cases where you have a budget and have a lot of time. I would position Airtable making a leap toward a graphical user interface, versus a lot of products that are admin driven.”

Liu said the company has raised an additional $52 million in financing in a round led by CRV and Caffeinated Capital, with participation from Freestyle Ventures and Slow Ventures. All this is going toward a way to build a system that is trying to abstract out even the process of programming itself, though there’s always going to be some limited scope as to how custom of a system you can actually make with what amounts to a set of logic operation legos. That being said, the goal here is to boil down all of the most common sets of operations with the long tail left to the average programmers (and larger enterprises often have these kinds of highly-customized needs).

All this is coming at a time when businesses are increasingly chasing the long tail of small- to medium-sized businesses, the ones that aren’t really on the grid but represent a massive market opportunity. Those businesses also probably don’t have the kinds of resources to hire engineers while companies like Google or Facebook are camping out on college campuses looking to snap up students graduating with technical majors. That’s part of the reason why Excel had become so popular trying to abstract out a lot of complex operations necessary to run a business, but at the same time, Liu said that kind of philosophy should be able to be taken a step further.

“If you look at cloud, you have Amazon’s [cloud infrastructure] EC2, which abstracted the hardware level and you can build on existing machine intelligence,” Liu said. “Then, you get the OS level and up. Containers, Heroku, and other tools have extracted away the operation level complexity. But you have to write the app and modal logic. Our goal is to go a big leap forward on top of that and abstract out the app code layer. You should be able to directly use our interface, and blocks, all these plug and play lego pieces that give you more dynamic functionality — whether a map view or an integration with Twilio.”

And, really, all these platforms like Twilio have tried to make themselves pretty friendly to coding beginners as-is. Twilio has a lot of really good documentation for first-time developers to learn to use their platforms. But Airtable hopes to serve as a way to interconnect all these things in a complex web, creating a relational database behind the scenes that users can operate on in a more simplistic matter that’s still accurate, fast, and reliable. 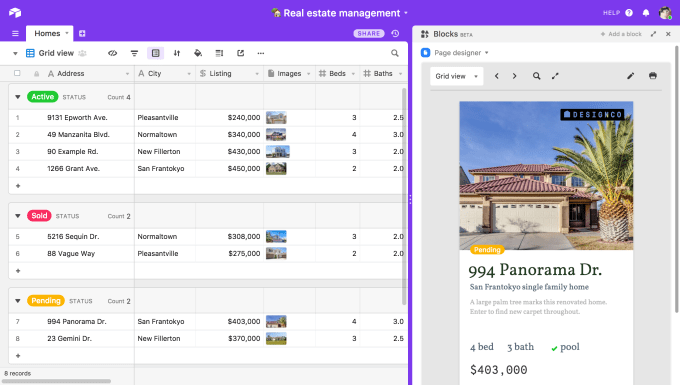 “Obviously MySQL is great if you want to use code or custom SQL queries to interface with the data,” Liu said. “But, ultimately, you’d never as a business end user consider using literally a terminal-based SQL prompt as the primary interface to and from your data. Certainly you wouldn’t put that on your designs. Clearly you would want some interface on top of the SQL level database. We basically expose the full value of a relational database like Postgres to the end user, but we also give them something equally but more important: the interface on the top that makes the data immediately visible.”

There’s been a lot of activity trying to rethink these sort of fundamental formats that the average user is used to, but are ripe for more flexibility. Coda, a startup trying to rethink the notion behind a word document, raised $60 million, and all this points towards moves to try to create a more robust toolkit for non-technical users. That also means that it’s going to be an increasingly hot space, and especially look like an opportunity for companies that are already looking to host these kinds of services online like Amazon or Microsoft and have the buy-in from those businesses.

Liu, too, said that the goal of the company was to go after all potential business cases right away by creating a what-you-see-is-what-you-get one size fits all platform — which is usually called a horizontal approach. That’s often a very risky move, and it’s probably the biggest question mark for the company as there’s an opportunity for some other startups or companies to come in and grab niches of that whole pie in specific areas (like, say, a custom GUI programming interface for healthcare). But Liu said the opportunity for Airtable was to go horizontal from day one.

“There’s this assumption that software has to involve literally writing code,” Liu said. “It’s sort of a difficult thing to extricate ourselves from because we have built so much with writing code. But when you think about what goes into a useful application, especially in the business-to-business internal tools in a company use case which forms the bulk of software that’s consumed in terms of lines of code written, most of them are primarily a relational database model, and the relational database aspect of it is not an arbitrary format.