Abra, a global currency wallet that was the belle of the early Bitcoin ball, has just added 20 cryptocurrencies and 50 fiat currencies, a feature that allows you to top up and send cash and cryptocurrencies from inside the wallet. 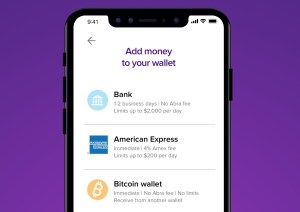 “Abra developed a first-of-its kind smart contract investing platform that uses bitcoin technology to allow users to hold exposure to cryptocurrencies and fiat currencies on a smartphone much the same way Fidelity allows you to buy an ETF in the old world,” said founder Bill Barhydt. “With this model, we can enable exposure to any asset — Abra has only started with crypto and fiat.”

The system allows you to convert between currencies with “no transaction fees, at any time with no limitations.” It seems to work similarly to ShapeShift, another solution that allows nearly instant conversions between currencies.

There are also a few tricks up Abra’s sleeve, including the clever use of smart contracts to reduce the volatility associated with currency trades. They write:

Consumers can add money to their wallets using a bank account, an American Express credit card in the United States or using bitcoin purchased outside Abra from anywhere in the world. They can then invest in any of the 20 cryptocurrencies offered on the Abra app, quickly, easily and safely. To develop the new wallet and integrated exchange, Abra built a first-of-its-kind platform using price-stabilized crypto tokens, called stablecoins, that facilitates holding both fiat coins as well as cryptocurrencies through a combination of litecoin and bitcoin based smart contracts. This unique multi-sig smart contract based investment platform uses Pay To Script Hash scripts on the litecoin and bitcoin blockchains that simulate investment contracts the way a gold ETF is a contract based on USD. Abra acts as the counter-party (i.e. the other signatory) to the P2SH scripts, enabling the company to now run a market making operation that hedges away its counter-party risk on these scripts.

In short, Abra is trying mightily to ensure that buys and sells won’t drastically change due to volatility.

“In addition to the 50 fiat currencies, Abra previously supported Bitcoin and Etherium, but found that their users wanted the ability to invest in alternate cryptocurrencies in an easy and quick manner — without the hassle of multiple transactions and fees,” said Barhydt.