Unlike some jobs, there’s no clear educational path to becoming a venture capitalist. Doctors have medical school. Lawyers have law school. Plumbers, electricians, welders, barbers, bartenders and plenty of other trades have schools of their own.

Some VCs were educated in the “school of hard knocks” by founding and building successful startups; however, many went to business schools. Others came to entrepreneurial finance after careers as academics and researchers.

The educational backgrounds of VC investment professionals are in some ways surprisingly diverse, even if the population of investors generally isn’t. Still, there are some definite trends to suss out at all levels of the educational continuum, and that’s what we’re going to do today.

Using Crunchbase data for approximately 4,500 U.S. and Canadian investment partners — individuals associated with a particular investment firm who have made at least one investment on behalf of those firms — we extracted information about their educational backgrounds and alumni affiliations. In the following analysis, we’ll take a broad look at these two areas, looking first at alumni affiliations.

Where VCs went to school

In the chart below, we’ve charted the top 10 universities that have granted the most degrees to investment partners. (Note: There are 12 displayed because of ties.) 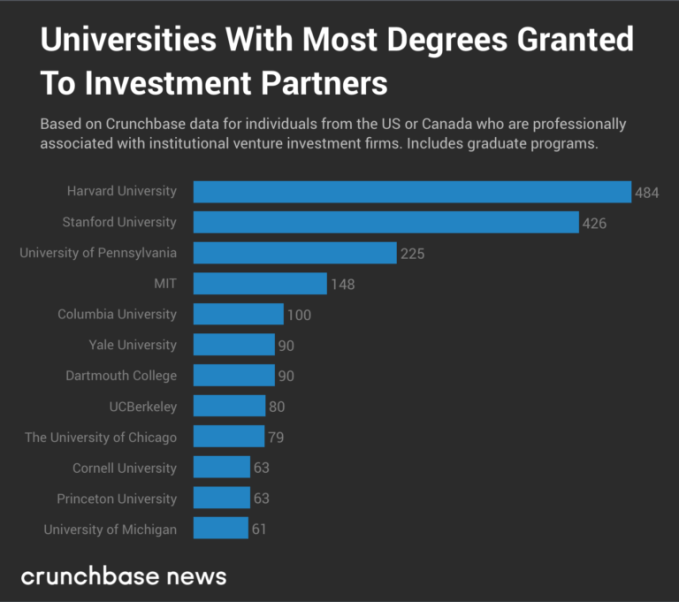 This includes all degree types, from undergraduate through PhD, and aggregates all of the schools and sub-organizations within a broader university system. For example, the University of Chicago’s figures account for the main institution, the Booth School of Business, the Law School and other sub-organizations. Another example: The above listing for University of Pennsylvania combines the Wharton School with the broader UPenn ecosystem.

The results? Professionals in an elite and exclusive profession like venture capital tend to be affiliated with elite and exclusive schools. In this top-10 ranking, seven of the eight Ivy League schools are represented. (Brown ranked 15th, with 35 total degree connections among the set of investment partners we used.) Three of the four so-called “Ivy-Plus” schools — Stanford, MIT and University of Chicago — also make these rankings. Duke ranked twelfth.

Where VCs went to college

But what if we just wanted to look at undergrad education? The chart below shows the top dozen schools where investment partners in our data set went for their bachelor’s degree. (Again, there are ties, so there are 15 schools displayed here.) 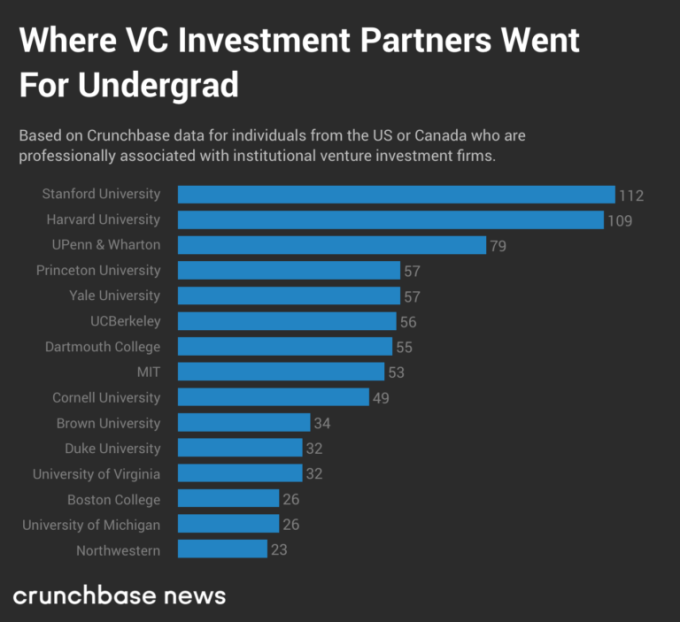 For the most part, the collection of universities represented here is remarkably similar to the overall top-10 rankings.

But what happens after four years of college? Surely some folks who’d eventually become VC investment partners go directly into the workforce and never return to school? But data suggests these folks would be in the minority.

How much education do investment partners get?

Most investment professionals carry on their academic studies well beyond their undergraduate degrees. In the charts below, we’ve identified the highest-listed degree for the investment partners in our data set. 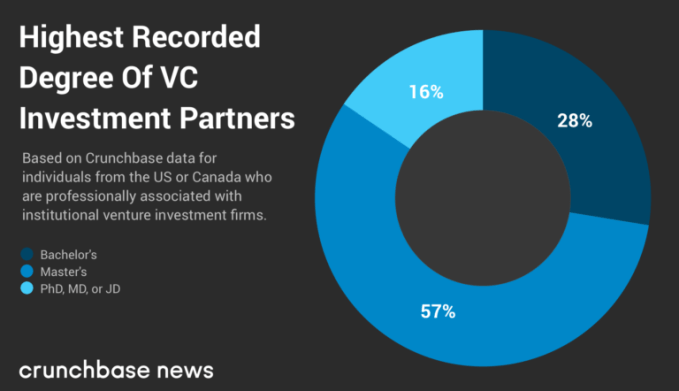 As we can see here, a large majority of investors have earned at least a master’s degree. And most of these come in the form of MBAs. Although it isn’t illustrated above, more than 80 percent of the master’s degrees listed in our data set were MBAs, many of which were issued by the very same universities that made the top overall and undergraduate rankings discussed earlier.

Is an MBA the golden ticket?

The MBA appears to be an appealing degree, even for those with a lot of education already under their metaphorical belts. Nearly a quarter of investment partners who hold PhDs, MDs, JDs or equivalent doctoral-level degrees also have MBAs. 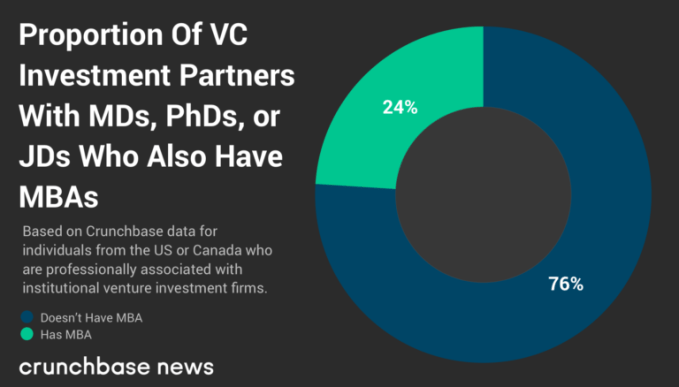 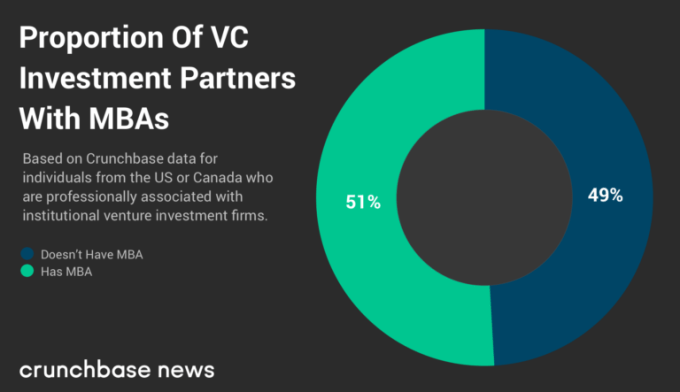 At best, an MBA is a somewhat necessary but nonetheless insufficient qualification to get into this line of work.

In other words, at least based on the data available to us here, whether an MBA helps you join the rarified ranks of VC investment partners is ultimately a coin toss. The odds go up slightly for those who graduated from prestigious programs at places like Harvard Business School or Stanford GSB.

But that latter point prompts a couple of questions. What did all of these investment professionals study, anyways? And if an MBA does matter, which business schools have been the most prodigious in their output of future venture capitalists? These questions are a bit beyond the scope of what we just wrote here, so stay tuned for follow-ups to this article.