Twitter is taking some steps to combat cryptocurrency scammers on its platform. But these are best classified as ‘baby steps’ at this point.

The company does not currently have a specific ad policy relating to cryptocurrency and ICO related ads — which Facebook banned in January.

“We allow ads that don’t violate the Twitter Advertising rules,” was the response from a Twitter spokesman when we asked about its policy towards crypto and ICO ads.

Twitter also notes there can be country-specific restrictions on financial services.

Yet earlier this month, Australian news site ABC News reported that local Twitter users were being inundated with ads for Initial Coin Offerings and cryptocurrency exchanges.

At the same time, many global regulators have issued public warnings about the risks of investing in ICOs.

Some regulators have banned them entirely.

And the crypto market is essentially characterized by misleading and deceptive claims at this point — given the lack of clear and firm regulation.

So Twitter’s continued acceptance of ad dollars from cryptoland looks pretty hard to square with its own ad policy at this point.

What it is doing to mitigate crypto scamming appears to be a more subtle policing of Twitter users who send tweets that contain targeted requests to others to send crypto.

Reuters reports that an account posing as Elon Musk, which had last month targeted followers of the billionaire and claimed to be giving away cryptocurrency, was suspended as of yesterday.

“We’re aware of this form of manipulation and are proactively implementing a number of signals to prevent these types of accounts from engaging with others in a deceptive manner,” a Twitter spokesperson told the news agency.

The spokesman declined to provide us with any more information about its actions or the kinds of issues it’s tackling in the crypto area.

But a tweet sent as a joke by a friend of a TechCrunch colleague — asking him to “send me 0.6-3.0 eth and a press release and get back a press release you can pretend is real press” — resulted in this Twitter user’s account being briefly suspended.

At the same time, after searching for all of two seconds, we found what is clearly a fake account (screengrabbed below) posing on Twitter as the Telegram Open Network, and soliciting “1 to 5 ETH” to “become a part of the 3rd “A” pre-ico sale”.

At the time of writing this account remains online.

Perhaps it’s avoided suspension to date because it’s still fairly new (created: February 2018) but also because it has not yet attempted to directly and publicly solicit crypto from other Twitter users (by @-ing them).

Though this Twitter account could still be linked through to in forums or on other platforms to try to trick people into sending ether. Aka: A scam.

While scams involving fake accounts directly asking people to send crypto are clearly one problem in the crypto space — and it’s good that Twitter is trying to crack down on this type of behavior — it is merely the tip of the massively scammy iceberg where crypto/ICOs are concerned.

Entire ICOs have turned out to be scams. Obscure crypto exchanges have been hacked and drained of millions. Consider also the disinformation-fueled crypto pump and dump scams that seek to capitalize on crypto volatility at the expense of people getting duped.

A quick glance at hashtags like #tokensale, #tokenlaunch and #ICO shows there’s still near unlimited bandwidth for promo-ing your (entirely unregulated) crypto activity on Twitter.

He embedded the below graph: 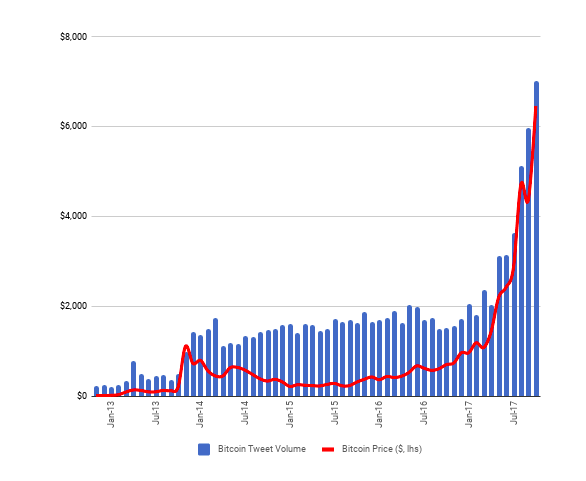 He also made the wild claim that as “rumors run wild, Twitter is the place to stay informed”.

A statement that also looks incompatible with the platform continuing to accept crypto ads where there’s zero guarantees such an ad isn’t actually a scam trying to run wild.

Dumping crypto ads when the space remains so beset with scams and (at best) unregulated claims seems the very least it could do.