YouTube Studio, the video sharing network’s revamped channel management system, launched into beta last June, will now become the default experience for creators. The company announced today that YouTube Studio will began to reach many creators in the weeks ahead, though the option to switch back to the Classic view will remain available. The public launch is also being accompanied by a handful of new metrics in YouTube Analytics, aimed at helping creators better understand how their videos are performing.

The first – an impression – gets counted when a viewer sees a video thumbnail on YouTube. This is like the potential reach, as it’s an opportunity for that viewer to click on the video and watch. The second new metric, impressions click-through rate, tell you when that actually occurred. This will be displayed as a percentage.

Impressions won’t be tracked everywhere on YouTube, however. They’ll only be counted on the YouTube homepage, subscription feed, search, and in the “up next” section. But that’s at least a good starting point to get an idea about how well your video thumbnails are performing to convert viewers. 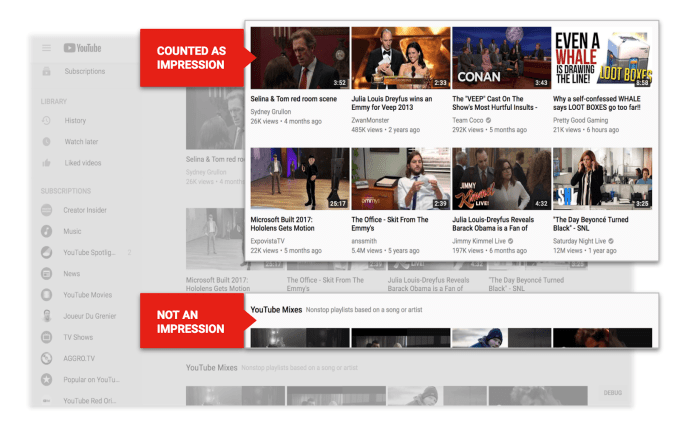 The addition of impressions could also be seen as something of a jab at Facebook, as it allows YouTube to serve up big numbers, like Facebook does. The data can then be made more compelling when combined with YouTube’s high-quality video view data – on YouTube a view is 30 seconds-plus. Facebook meanwhile offers 3-second views as a starting point. (Other view metrics are also available).

Big numbers matter as YouTube increasingly tries to attract TV ad dollars to its network, as well – especially as Facebook doubles down on its own video strategy with Facebook Watch.

The third new metric, unique viewers, shows the estimated number of different people who watched a creator’s videos over a period of time, across devices. This helps creators compare the size of their audience to their subscriber base, and can help them when negotiating brand deals and sponsorships.

The new YouTube Studio also ships with a new dashboard, which will serve as a “one-stop shop” for data, insights, and news, says YouTube. This will include video snapshots (performance data that used to be spread out, and required manual calculations), personalized recommendations, and news and updates from YouTube. 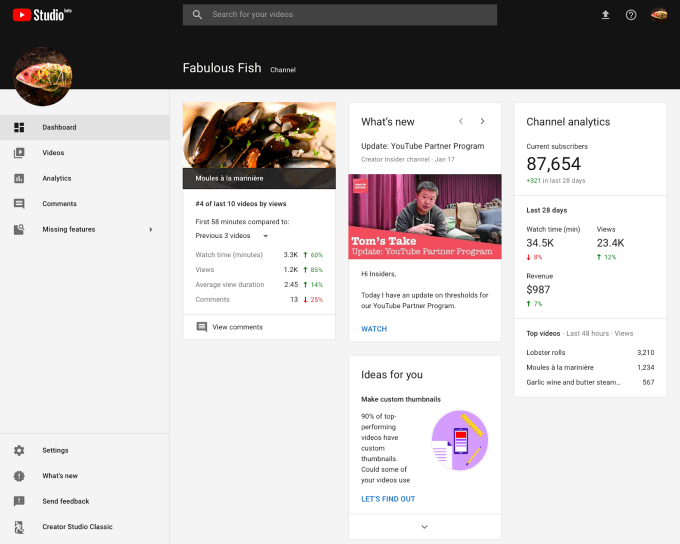 This dashboard will also roll out in the weeks ahead. However, the new metrics are rolling out to a small group of creators today and will become available to all YouTube Studio users within a few weeks.