When an employee is looking to advance in their career, where they work might have a kind of strict hierarchical path for the role they’re in and what titles come next — but there’s a good chance that employee might want to try something new without leaving their company.

Instead of going from just an agent to a manager of agents, or following some existing promotion line, a company that’s large enough probably has plenty of other opportunities within it across many different divisions — each with either a directly-comparable skillset, or one that might need some slight additions. That’s where Degreed, an online service for identifying those skill gaps and how to pick them up, as well as track them, comes. Instead of locking employees into a single trajectory, Degreed hopes to give employers tools to help employees improve their skills even more, and in the end become much more valuable to the employer. Degreed today said it has raised $42 million in a venture financing round co-led by Owl Ventures and Jump Capital, with Founders Circle Capital and existing investors participating.

The service launches inside an organization, identifies the content that offers an opportunity to work on skills like project management (often made by the company itself), and then shows employees how to start working on those skills. And those skill gaps between roles might actually be much smaller than those employees think, and it’s just a matter of identifying what they need to work on in order to grow within their company. After that, it identifies the best ways to get those skills, which can come in the form of content or potentially other avenues, and helps employees figure out how far along their progression path they are.

“The real challenge is that no matter how big or sophisticated any one content source is, whether it’s higher education and formal training, that’s increasingly a smaller slice of the pie,” Chris McCarthy, who was named CEO of the company today, said. “If you know where to look, you can build any skill. As content proliferates — for enterprises and for individuals — all these platforms are islands of learning. They do a good job of getting through that experience. Nothing prior to that is weaving through those islands of learning.” 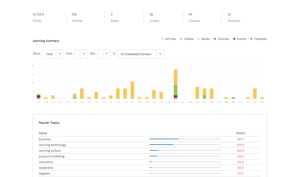 McCarthy said even though the employers are helping their employees learn new skills, which might even help them get jobs elsewhere, they aren’t having an issues signing up potential clients. That’s because in the end, employers are going to see more value in helping those employees grow and learn new skills, and that might provide its own feedback loop where employees feel like they are getting the most from their company and want to stick around.

Of course, one of the big challenges for Degreed is not only identifying content that can serve as a barometer for learning a new skill, but also gauging its quality. For example, an online MIT course on Linear Algebra — just a series of videos and problem sets — could potentially end up superior to the other online course next to it on some well-known online course service.

While Degreed may have initially served as a kind of hub or aggregation point for educational content initially — or at least, that’s what people thought it was, McCarthy said — all that information coming in has helped it create a robust data set that it can use going forward to further help employees figure out what skills they need to learn, or even skills they didn’t realize they want to learn. When an employee comes in the door for the first time, the hope is that Degreed will have enough information for what’s inside the company and what the employee is interested in to gauge right away what they might want to learn.

That, in the end, provides a neat feedback loop. A tool like Degreed gets used to what employees want to learn, and starts to spot skills gaps inside a company that need to be filled. If all that plays out the way you might expect, then the whole notion of a hierarchy in a company might be a thing that might not exist for much longer — and employees, who are hopefully digging up the skills they want and would be good at, are the ones that chart out the real progression path inside a company as it tries to achieve its goals.

“Without engagement, just having data is insufficient,” McCarthy said. “The data you need only comes from engagement on a platform. You can have all the best models and content, but if people aren’t using the product, you can’t reduce the data that’s helpful. They’re making these decisions looking at the data, and they might see the tip of the iceberg on the surface of the water. But now companies can sit back and say, ‘here’s this glacier of learning under the water.’ It’s a combination of putting a place in the individual where a person can touch it and see it and see a real pathway.”

There is definitely a lot of interest in the employee learning space, especially as it makes sense for larger companies who are increasingly aching for niche talent like machine learning are looking to find the best people — who might even be at their own company. Grovo, for example, raised $40 million about two years ago. But as is the case with any platform looking to win, it’s going to be a race to get the best (and most) data to convince employers that they can quickly and efficiently identify the best people to learn a skill, something McCarthy hopes Degreed has with a million licensed users.