Earlier this month, Amazon began offering one- and two-hour Whole Foods deliveries through its Prime Now service. Now, Walmart fighting back. Its membership warehouse club, Sam’s Club, announced today a partnership with Instacart which allows shoppers to order groceries and other household goods for same-day delivery.

The partnership is kicking off with launches in Austin, Dallas-Fort Worth, and St. Louis markets, but Walmart says that the expectation is to expand the service to “millions of additional households” across the U.S. this year and beyond.

Via the new URL samsclub.com/instacart or from Instacart’s mobile app, shoppers can order groceries, household items, Member’s Mark products, and even small appliances, then have them delivered in an hour or so.

Also notable, the partnership will allow non-club members to shop from Sam’s Club, too.

They’ll still be able to take advantage of the same-day service and the conveniences of buying in bulk, but only Sam’s Club members will receive the lower, members-only pricing. Instacart customers can opt to join Sam’s Club and then enter their member number in the loyalty card section of its app to gain access to the discounted prices at any time.

The deal with Instacart is the latest in Walmart’s battle with Amazon, as each try to one-up the other with similar initiatives, whether that’s free shipping on online orders, grocery pickup and delivery, or even in-home deliveries through integrations with camera systems and smart locks. 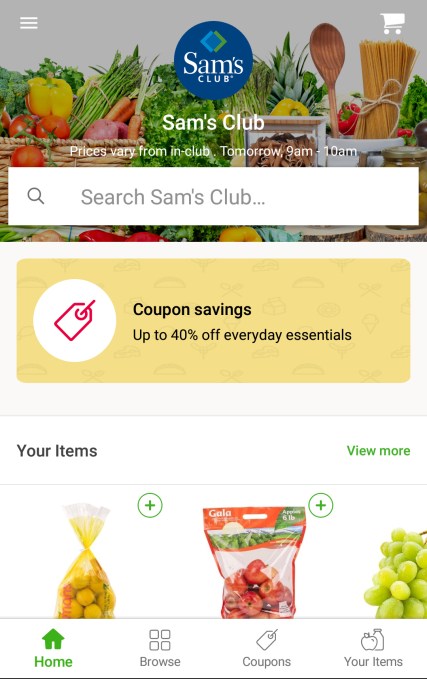 Only a couple of weeks ago, Walmart challenged Amazon Prime again with the launch of a Prime-like membership model for Sam’s Club offering free delivery on 95 percent of the items its sells online. The company also said it was opening its first e-commerce fulfillment center – in FedEx’s hometown of Memphis – to serve an expanded online customer base.

But for obvious reasons, those efforts exclude the shipping of fresh groceries and frozen foods. That’s where Instacart comes in.

Walmart is without its own delivery service for same-day groceries, is why the retailer has been testing a variety options for grocery delivery, including through partnerships with Uber, Lyft, and Deliv. And while Walmart has made a lot of acquisitions to beef up its e-commerce business over the years, it hasn’t snatched up a same-day delivery business as rival Target just did with its $550 million acquisition of Shipt.

The Sam’s Club-Instacart deal, then, raises the question as to whether Walmart may consider a larger partnership with the same-day service in the future to power Walmart’s own grocery deliveries.

Instacart today works with the seven top grocers across North America, including Albertsons and Kroger, and has also signed deals with Costco and CVS, among others. It’s now available in over 210 markets in North America, which would allow Walmart to more quickly scale up to reach those customers interested in grocery delivery.

“We know our members love our mix of exciting items, and appreciate it when we make life a little easier for them,” said Sachin Padwal, Sam’s Club’s Vice President of Omnichannel and In-Club Product, in a statement. “Whether it’s Scan & Go, Club Pickup – and now delivery in as little as an hour– shopping with Sam’s Club is getting easier and more convenient, and we’re just getting started,” Padwal added.