In the 1800s, for example, some slave-owners who rented out their slaves would insure them so that, in the event their slaves died or were severely injured in the hands of someone else, the owners would not suffer too much of an economic loss, according to The Treasury of Weary Souls.

The Treasury of Weary Souls, created by New York University Professor Michael Ralph and engineers from Resilient Coders, examines what slavery looked like after the trade was outlawed in 1808, but continued to exist via the smuggling, breeding and renting of slaves within the United States. Ralph spent a solid seven years researching slave policies, and when it came time to sharing it with the world, he hired a handful of coders from Resilient Coders.

For the last year or so, a handful of Resilient Coders worked with Ralph through the concept, design and the ultimate creation of the project, which utilized JavaScript data visualization tool D3.js. The project was spearheaded by Resilient Labs’ Muigai Unaka, a lecturer at Northeastern University. 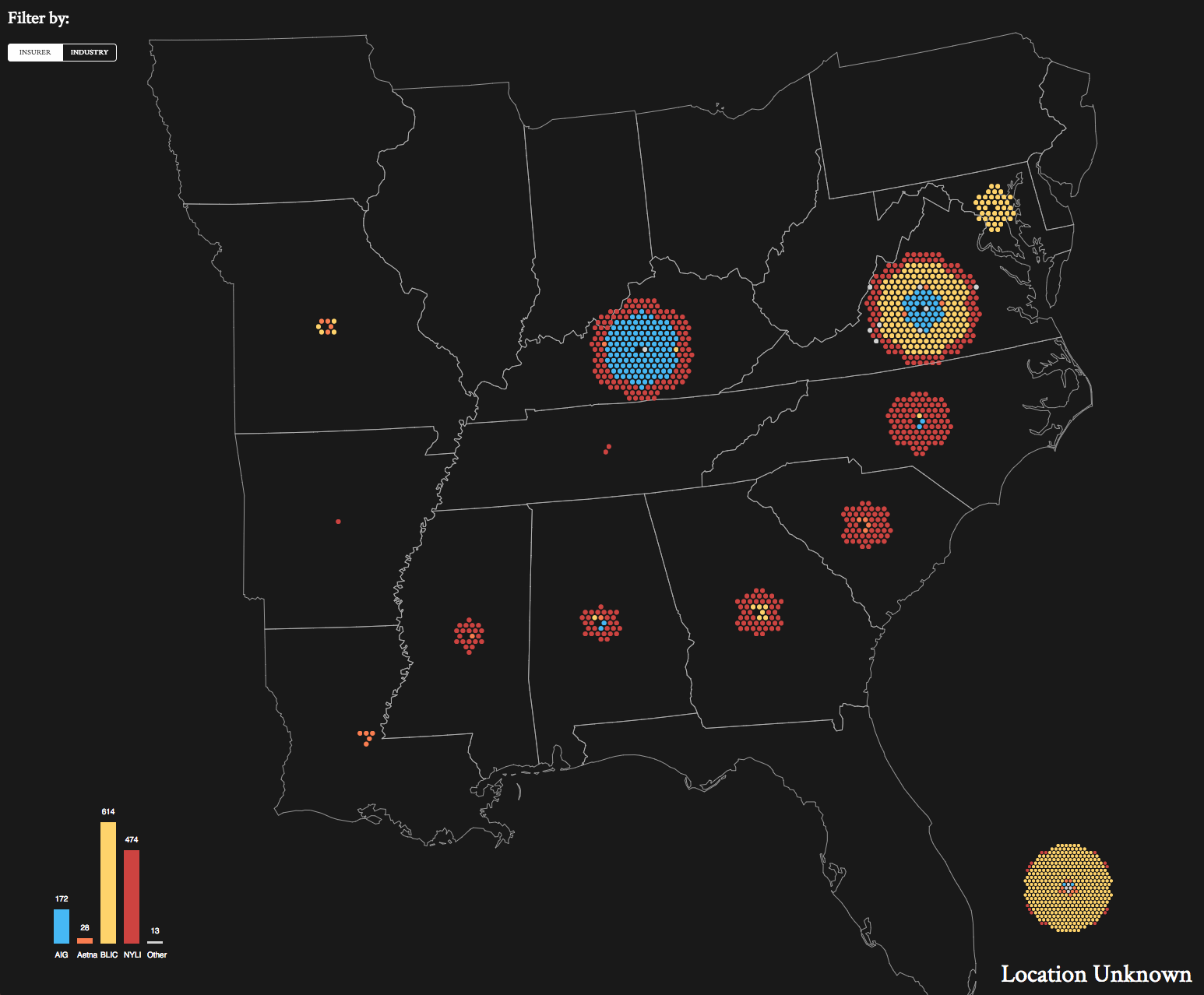 Map of insurance policies taken out on slaves (Source: The Treasury of Weary Souls)

As Ralph’s research shows, slave owners sometimes relied on financial firms like Aetna, AIG and New York Life Insurance to insure the slaves whose skills were highly valued. In Alabama, New York Life, which was known as The Nautilus Insurance Company at the time, was the largest slave insurer, according to the Treasury of Weary Souls. Between 1845 and 1848, NYLI sold policies to slaveholders to insure their slaves against damages or death.

By the 1840s, the number of slaves insured in the South was about the same as the number of free whites with life insurance, according to Ralph. Of that number, however, Ralph said he never saw a plantation slave insured in his seven years researching 1,300 policies.

“Even though plantation slaves were valuable in the marketplace, they were never insured,” Ralph said. “They were viewed more as livestock. They enhanced the value of the plantation but their skills weren’t seen as valuable or premium.”

In January 1855, a slave owner by the name of Thomas Doswell insured seven slaves to work in the coal pits in what is now West Virginia. Two of the older slaves were insured for $500 each and the younger ones were insured for $700 each. In 1855, the average price for a slave was $600, according to Ralph’s research.

Ralph says the Treasury of Weary Souls is the most comprehensive ledger of skilled slaves who built America. In his research, Ralph said he found these slaves had more mobility than plantation slaves. Sometimes they were able to negotiate their work schedules and other terms of forced labor, he said. The market for slave insurance was mostly in urban areas. 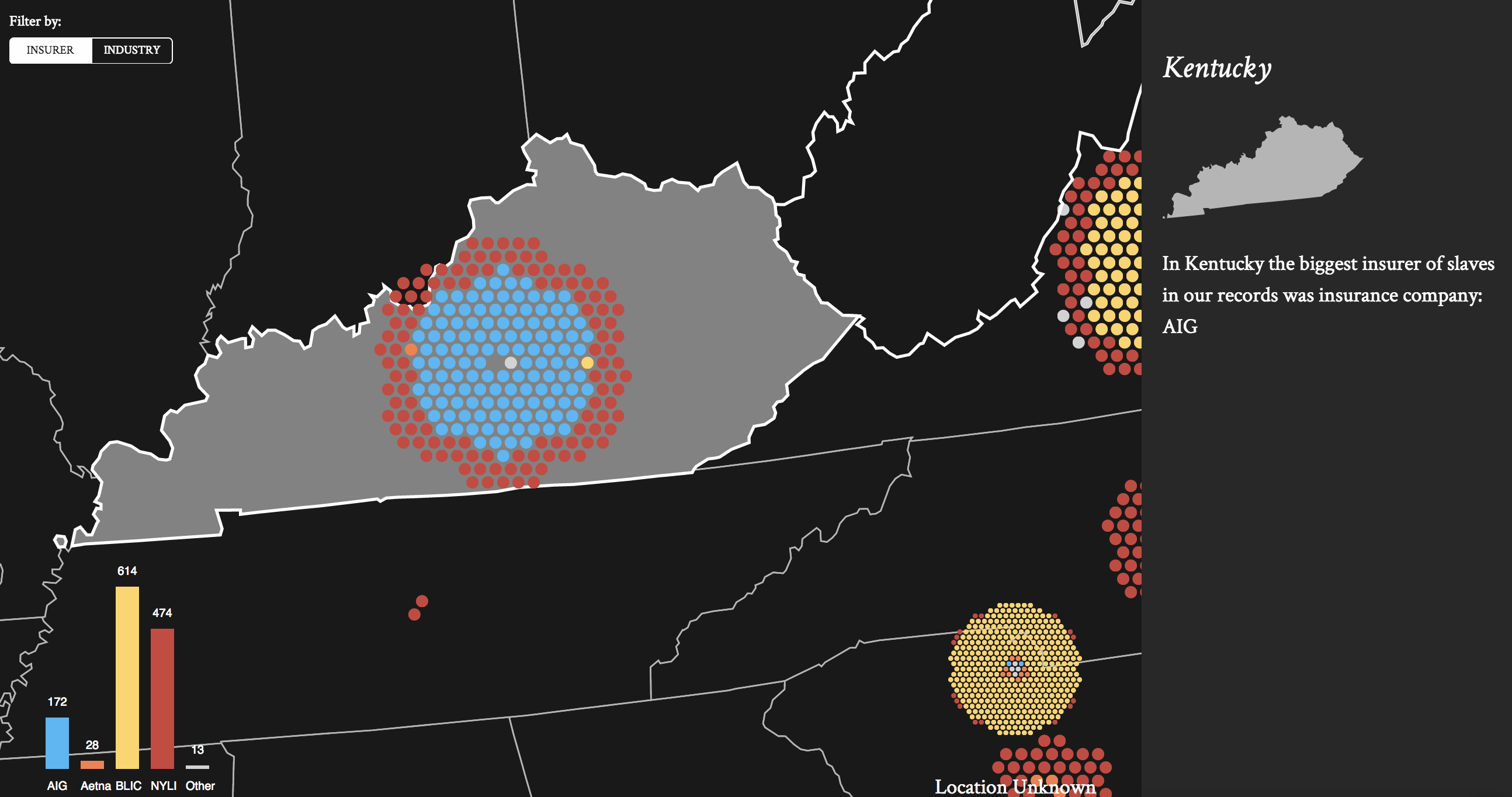 “On one hand, this is about a new tier of slaves who emerged in the last decades of legalized slavery who were more elite,” Ralph said. “There were ways in which they were more valuable even though they were less free than free white people.”

“With urbanization, more people started to become open to the idea of finding some way to insure against potential loss of income if they happen to pass away,” he said. “The industry of slave insurance created the appreciation for what that mechanism can do.”