If you’ve tried to deal with a bot before you can speak to a human customer service rep, you know how frustrating that process can sometimes be. Sure, there are basic tasks that can free up a human rep to handle the more difficult matters, but it can be exasperating when there is no easy way to talk to a person. Agent IQ, a startup that has developed customer service bots, acknowledges that problem and today it announced a $6.3 million Series A investment.

The round was led by Sierra Ventures with participation from CRCM and Rubicon Ventures. Today’s investment brings the total raised to $8.5 million.

Agent IQ has its roots in a Nike marketing program, which allowed customers to communicate with a bot by typing “Hey Nike” into their chat app. CEO and founder, Craig Davis says they began building on that early program, and they learned that just the bot or just an agent didn’t really work for many customers. It required a product that blended technology with humans.

He found by visiting countless customer service centers, the pain wasn’t just for the customers. Reps were bored answering the same basic questions repeatedly, which wasn’t fun or challenging for them. What’s more, when they did need to answer unique questions, it required accessing a variety of disparate systems. The agents had to have multiple windows open trying to juggle different content repositories to find the appropriate response. 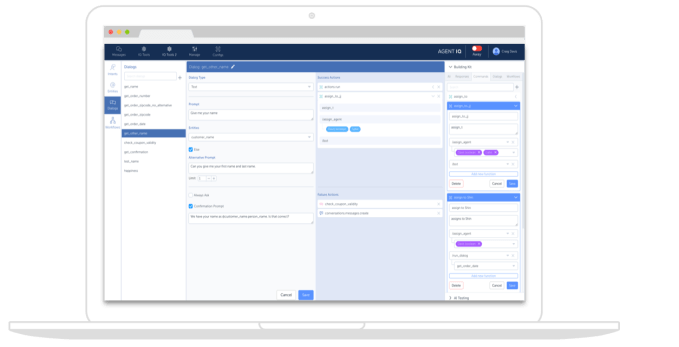 “We thought it was important to help the agent, suggesting responses based on past conversations and based what they picked up on new knowledge,” Davis explained. They also began presenting knowledge base articles dynamically based on the context of the conversation, using that power of artificial intelligence and machine learning underpinning their solution.

Davis understands that he is competing with giants like Salesforce and Oracle, but he says because his company’s solution is built from the ground up with the latest technology, it has a leg up on these usual suspects. “Let’s talk about AI piece. They have years of technical debt and their technology is overlaid on their customer service management platform. They don’t get seamless handoff and don’t get that closed loop AI learning [that we provide],” Davis claimed.

The company currently has 20 employees and 14 customers, all of which Davis says are Fortune 1000 customers paying at least $500,000 a year. He says the company plans to expand on the sales side and to build out customer success teams using the new funds.