Messaging is the heart of Snapchat, so after cloning and augmenting Stories, Instagram is hoping to boost intimate usage of Direct with privacy controls not found elsewhere. Now when you send an ephemeral photo or video from the Instagram Direct camera, you can decide whether recipients can only view it once, replay it temporarily or see a permanent thumbnail of it in the chat log.

Previously, all messages could be replayed temporarily but then would completely disappear. Snapchat always lets you temporarily replay a photo or video message, with no way for senders to deactivate the option.

The replay controls could encourage Instagrammers to send more sensitive imagery by allowing them to prevent replays that can give people time to take a photo of their screen with another camera without triggering a screenshot alert to the sender. Whether it’s silly or sexy, some messages are only meant to be seen once. Meanwhile, non-sensitive messages can be set to permanent so it’s easy to look back and reminisce, or prevent a conversation from losing context if someone forgets or misses what was in a visual message. 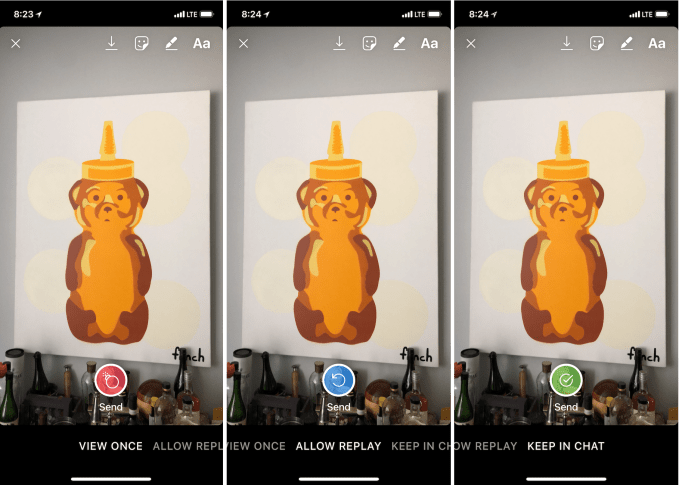 Instagram tells me it rolled out the new “Keep in chat” option last month after introducing “allow replay” or “view once” options in November. An Instagram spokesperson tells TechCrunch “All these updates are designed to give people more control of what they share with friends in Direct.” Ken Schillinger first tweeted about the change.

Remember, you can only replay a message right after you watch it the first time, before closing the app or moving to a different screen. And senders are able to see if you replay a message.

Battle for chat beyond Stories

Snapchat’s private messaging proved to be its most resilient feature after a leak saw The Daily Beast’s Taylor Lorenz dump a ton of the company’s usage data. In August, Snapchat users were 64 percent more likely to send a private snap to a friend than broadcast to Stories. While the number of daily users who post to Stories stagnated during Q3 last year in the face of Instagram’s competition, the number of users sending messages continues to rise.

That’s why now that Instagram Stories and WhatsApp Status both have more than 300 million daily active users, dwarfing the 187 million total daily users on Snapchat, Facebook is trying to revamp its ephemeral messaging options. Instagram combined ephemeral and permanent Direct messaging last April, and in December began testing a standalone Direct app. Snapchat has managed to turn around its business and revive growth, so Instagram could use some momentum.

Instagram and Snapchat continue to see distinct behavior patterns despite the former’s attempt to become the latter. Instagram Stories was supposed to let you share more than the permanent feed highlights of your life. But users still seem to prefer to share private, provocative and ridiculous Stories and messages on Snapchat, while Instagram gets more polished and posed posts and re-sharing of memes.

Being able to block replays or keep messages from entirely disappearing could let Direct encompass a wider range of visual communication.