Stem cells derived from a human placenta hold the key to unlocking a myriad of potentials in regenerative medicine and are the focus of X-Prize and Singularity University founder Peter Diamandis’ new endeavor.

Called Celularity, the startup is a spinout from Celgene, a global biopharmaceutical company creating gene therapies. Diamandis teamed up with Dr. Robert Hariri, the founder of Celgene Cellular Therapeutics, to create Celularity in the hopes of using stem cells found in the human placenta to quickly regenerate tissue and organs needed to treat cancer and other diseases. The idea is these types of cells can do a better job of helping us live longer, fuller, healthier lives.

It’s a wild proposal and, seemingly, the stuff of science fiction often tossed around in certain Silicon Valley circles — create a startup focused on a medical breakthrough to make us live forever — or at least much, much longer than we currently do. But stem cell technology has been around for some time. 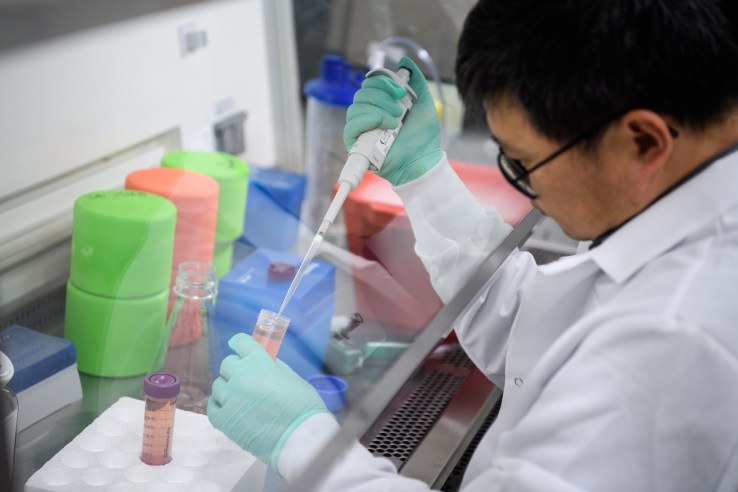 For decades stem cells have posed an ethical quandary as they’ve largely been harvested through discarded embryos. However, in just the last few years, science has discovered adult stem cells can come from a number of sources throughout the human body — including a woman’s placenta, shortly after giving birth.

Placental stem cells are even more important as they can be taken from any placenta and injected into any human without the risk of the body rejecting them, according to the company. And, because they are so abundant, treatments are potentially more affordable and can begin immediately.

But this is not the first time Diamandis has dipped his toe in longevity research. He cofounded Human Longevity Inc. in 2014 to focus on extending the human lifespan. Celularity extends his interests in this endeavor.

So far, the startup has conducted several clinical trials and treated “hundreds” of patients, Hariri tells TechCrunch. The next step is to try and gain FDA approval to roll these treatments out on a mass scale.

That approval may be just around the corner — possibly in the next 12-24 months, according to Hariri. That’s because “cellular medicine is intrinsically safe,” he says, adding the potential could have a “huge impact” on U.S. medicine.

So just how are Diamandis and Hariri obtaining these human placentas? Donations. Though some couples choose to keep (and later eat) their placental afterbirth, approximately four million human placentas are disposed of per year in U.S. hospitals.

While this strange, yet magical temporary organ is from a human mother, some states consider it to be a biohazard after birth and discard it as waste. Couples, by law, therefore cannot take and sell the tissue to Celularity or some other outfit hoping to use it up. But they can donate it.

That’s where Celularity comes in. The startup procures the placental tissue from hospitals willing to hand over would-be waste in the name of science.

Right now the field is pretty wide for Celularity, too. The company is only competing with a handful of others in the same space like Israeli biotech firm Pluristem. Though it seems to be the only player in the U.S. at the moment.

Add to that a whopping $250 million in new funding from several prominent investors and celebrities to help it grow, including well-known life coach Tony Robbins, John Sculley of Apple and Pepsi-Cola, former GV partner and founder Bill Maris, who now runs a new biotech funding venture Section 32, and Andrew Von Eschenbach, the former commissioner of the U.S. Food and Drug Administration.

One other big heaping help to the startup — Celularity owns and operates LifeBank USA, the world’s only repository of donated placenta cells and biomaterials. So, presumably, should any other companies want to do something similar in the U.S., they’d need to go through a subsidiary of Celularity first.

Celularity is sure to stay a large player in this field as it continues. It owns the whole chain from procurement to deploying treatments. It also holds 1,800 patents on the procedures.

“Our ultimate mission is to make 100 years old, the new 60, and to provide people with maximal aesthetic, mobility, and cognition as they age,” Diamandis said. “The 20 years of science, research, and intellectual property pioneered by my visionary partner Dr. Bob Hariri, is the cornerstone for the coming longevity revolution.”