Video platform Vimeo is today rolling out new features designed to simplify video distribution across social networks, including one tool that allows live video to be streamed to Facebook, YouTube, Twitch and Periscope at the same time. Another allows creators to upload to both Facebook and YouTube simultaneously with one click.

The additions come at a time when Vimeo has been shifting its business away from being a destination site for video content, like YouTube, and more of a tool provider for video creators. The company last year decided to scrap its subscription video-on-demand plans, promoted its creator business lead Anjali Sud to CEO, and acquired live video streaming platform Livestream.

Now the company aims to be more of a one-stop shop for anything video creators need to run their businesses, from tools to host, share and sell their videos, to those that allow them to build their own subscription or over-the-top streaming services.

“We’re starting this year with this creator-first mission, and the first launches we have are really about helping creators get distribution anywhere,” explained Sud, in an interview with TechCrunch. “This is a new strategy for us, and it’s different from what others are doing in the market.”

“A lot of platforms – whether it’s media platforms like Snapchat, or other social platforms like Facebook or YouTube – because they rely on eyeballs and clicks for ad dollars, they’re very focused on keeping content on their platforms,” she continued. “And they’re increasingly becoming walled gardens. As a creator, that means it becomes harder to figure out where your work should go and how you can get the audience that you want.”

With Vimeo’s launch of its “Publish to Social” tool, creators don’t have to spend time manually uploading to multiple sites. Instead, they can upload to both YouTube and Facebook at once. This is especially important for those who want to get distribution on Facebook, because the social network favors natively hosted videos as opposed to shared YouTube links.

In time. Vimeo plans to add other networks, as well.

After publication, creators can use Vimeo’s stats and performance dashboard to track things like plays, likes, and comments, so they can track their video’s performance across both Facebook and YouTube.

This feature is currently available as part of all Plus, PRO, Business, and live plans. (More details on how it works are available here.)

The tool’s launch also further cements Vimeo’s new position in the market not as a competitor to other video hosting sites, but as a partner, Sud noted. 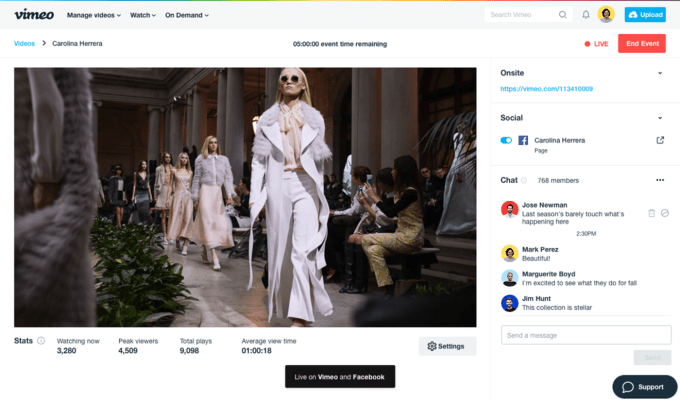 The other new tool, Simulcast, had been a Livestream feature that’s now coming to Vimeo by way of its Live plans.

With this, video creators can live stream their events from Vimeo to any RTMP-enabled (real-time messaging protocol) site, including Facebook, YouTube, Periscope, Twitch, and others. The feature will allow creators to save on bandwidth costs because they’ll be simulcasting via a single input stream, instead of requiring separate streams for each destination.

When the live stream ends, the video remains available on Vimeo, allowing creators to manage it, re-share it (or even sell it), after the event wraps. They can also track the analytics of how their stream performed, though these are fairly high-level for now.

In the future, Vimeo plans to address more of creators’ needs by way of a tools marketplace of sorts, as it doubles down on its partnership efforts.

“Our strategy is to be an end-to-end platform. Of course we want to build tools, but there are absolutely instances where instead of us building, it makes sense to partner,” said Sud. The company already has some partnerships with large companies, like Adobe (Premiere Pro), Dropbox and Google (Google Drive, Google Analytics), MailChimp and LinkedIn, among others. “The benefit of having a robust API is that we can empower our developers and other partners to build integrations,” she noted.

Some of the potential integrations that Sud is most excited about include cutting edge tools for things like A.I.-driven editing or livestreaming in augmented reality.

However, it’s not clear if a tools marketplace will be a revenue driver for Vimeo at launch.

“Our priority would not be to monetize the marketplace. Our priority is to get more tools and that end-to-end workflow into the hands of creators,” Sud said.

There’s no official launch date on this marketplace, but the social distribution tools are live now.