Today’s Valentines Day, and while it’s certainly the quintessential consumer-driven holiday, it’s also a day where many couples take stock of their relationship.

iHeartUs, a new app for couples, is launching today to help those couples keep and grow their relationships. Using a proprietary ‘love language’ algorithm, iHeartUs offers personalized recommendations for date ideas, gifts, special occasion reminders and other suggestions to help you remember to cherish your sweetie.

The five love languages first grew to prominence with the publication of Gary Chapman’s book The Five Love Languages, which postulates that everyone has a primary and secondary language through which they give and receive love. Those languages are gift giving, words of affirmation, physical affection, acts of service, and quality time.

iHeartUs helps users understand their love language, and the love language of their partner, to help couples cultivate their relationship.

The app was founded by Cassandra Soars with the help of her husband, who she met while working an at educational organization in Mozambique. The couple came back the states to get married and almost immediately moved back to Mozambique for the first two years of their marriage.

“We were doing full-time work in a third-world country, and we hadn’t invested in our own relationship,” said Soars. “We needed to do something differently.”

When users sign up for the app, they connect to their partner via email and order their love languages from most important to least. The app sends questions to users each day asking things like “What is your idea of a romantic night?” or “What are two of your partner’s greatest strengths?” These answers are sent back to your partner via the app.

The more information couples input into the app, the better the recommendations get, according to Soars. 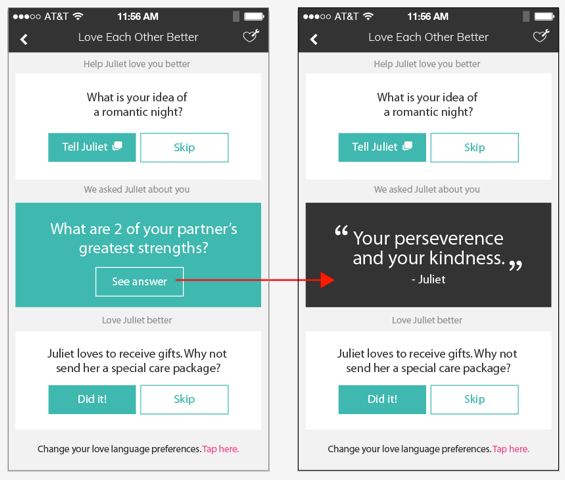 The app also has a date night feature, which is integrated with Groupon. The app curates Groupon’s most date-centric offerings and passes those discounts on to iHeartUs users.

iHeartUs makes money via affiliate revenue and promoting products for couples, but Soars says the company may some day evaluate the opportunity for a subscription model. Soars also says that a number of institutions focused on dating and ‘meeting your match’ are showing interest in iHeartUs as a long-term maintenance tool for the newly matched couples.

There have been a number of apps aimed at being a couple’s social network, such as Pair and Avocado. Some, like Eureka in Japan, have been quite successful. Soars says that her app’s proactive approach and proprietary algorithm differentiates the app from other couples’ apps.

iHeartUs is available on iOS and Android.