Facebook’s controversial app Messenger Kids, which lets parents control who kids can talk to, is today rolling out to Android devices in the U.S. with its launch on Google Play. The app will also now include a variety of new features for Valentine’s Day, like themed masks, stickers and frames, so kids can send special Valentine’s messages to their friends and family.

Android is the last major platform the app needed to address, having initially debuted on iOS, followed by last month’s arrival on Amazon Fire tablets. 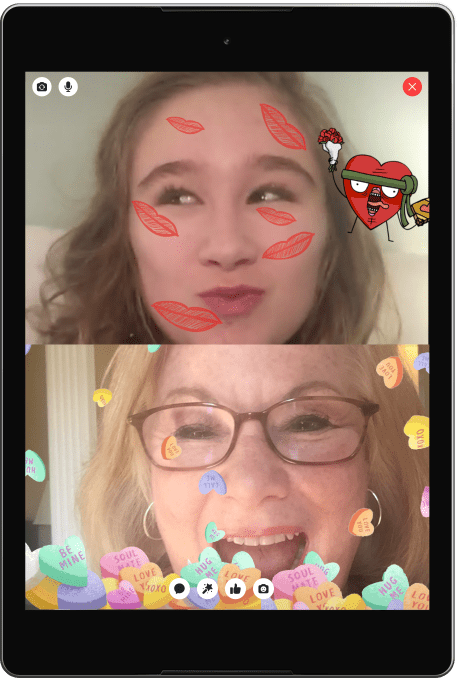 Today, many young children use mom or dad’s hand-me-down Android smartphone as their gaming device, or an Android tablet. Now, their parents, too, can choose to install Messenger Kids.

The question parents are asking themselves, however, is whether they should.

It’s not a simple question with an easy answer.

Not all parents or industry experts agree that Facebook’s kid-focused messaging app is a good idea. The thinking is that kids aren’t ready to be on devices or messaging family and friends, so they shouldn’t be doing this at all.

Unfortunately, they already are, which is what people don’t seem to understand.

It’s not as if parents are allowing kids to use devices instead of having them doing kid-like things, like running around outside, reading books, riding bikes, making art, or playing with friends. It’s just that devices have infiltrated kids’ lives, as they have ours. There are times that it’s fun for kids to send grandma a text, rather than pick up the phone – just as it is for parents.

The real problem is that there aren’t any existing solutions offering parents control over those conversations with the ability to scale, like a Facebook app offers.

Messenger Kids isn’t perfect by any means, but it’s a step up from predator playgrounds like Kik, for example. It still needs a better way for parents to monitor the ongoing conversations, so they can step in, if need be.

However, for those parents who have chosen to use the app, the feedback so far has been positive. The app currently has a 4-star rating on Apple’s App Store, and 3.5 stars on Amazon’s Appstore. (A number of the lower star ratings on Amazon’s Appstore were about the app not being available yet on Android devices.)