Snap is waking up to the “Time Well Spent” movement Facebook is already addressing. Snapchat is offering a way to mute specific people without formally blocking them. Meanwhile, the sweeping redesign that’s slowly rolling out comes with ways to jazz up your Snaps with colorful text styles and multiple captions.

The new features focus around making Snapchat the most flexible visual messaging app, doubling down on its most popular use case as its Stories stop growing in the face of competition from Facebook’s Instagram and WhatsApp. Instagram just added its own special fonts, which threatened to make Snapchat’s text look boring. A TechCrunch reader tipped us off with these screenshots. 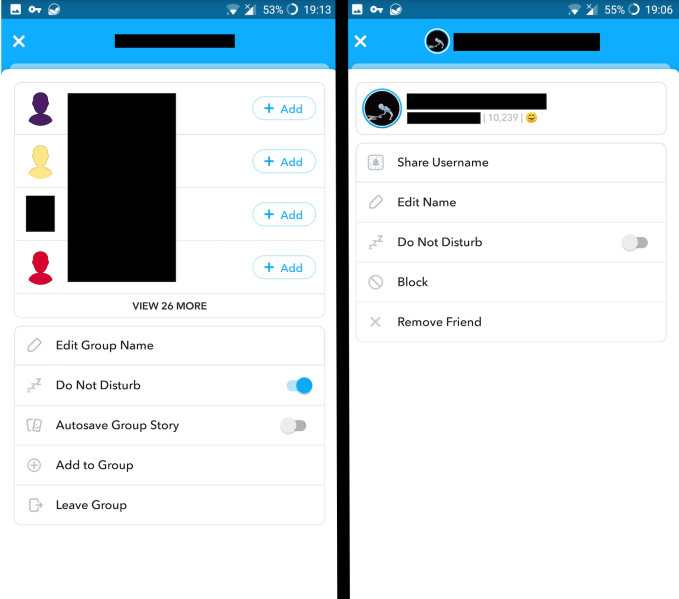 Snapchat tells me Do Not Disturb quietly rolled out a few weeks ago. By tapping and holding on a person or group, it lets you mute notifications from them so you don’t get constantly alerted but also don’t have to block them or leave the group. They won’t know you silenced them. That’s especially helpful if a close friend won’t shut up on Snapchat, but it’d be rude to cut them out entirely.

Protecting our sense of focus and attention is critical if we’re going to stay sane as mobile phones become more central to our lives. Muting your phone entirely can produce its own form of stress, as you wonder if you’re missing something important. That’s why thread-by-thread do not disturb features are necessary. Facebook Messenger has had the feature for years.

In fact, Do Not Disturb was championed by Tristan Harris, leader of the Time Well Spent movement who today launched the Center For Humane Technology that will fund anti-tech addiction research, education and lobbying. The next step for Snap would be allowing users to select how long they want to mute someone rather than it being indefinite. It also could offer a “notify anyway” option that tells the sender you’re busy, but that they can message again to bypass the Do Not Disturb barrier.

In more lighthearted fare, Snapchat confirms it’s starting to roll out new text styles just a week after Instagram added its new “Type Mode” with modern, signature, typewriter and billboard fonts. They’re coming as part of the big redesign that’s currently reached the U.K., Australia and Canada, but that a wider rollout has been steadily delayed. 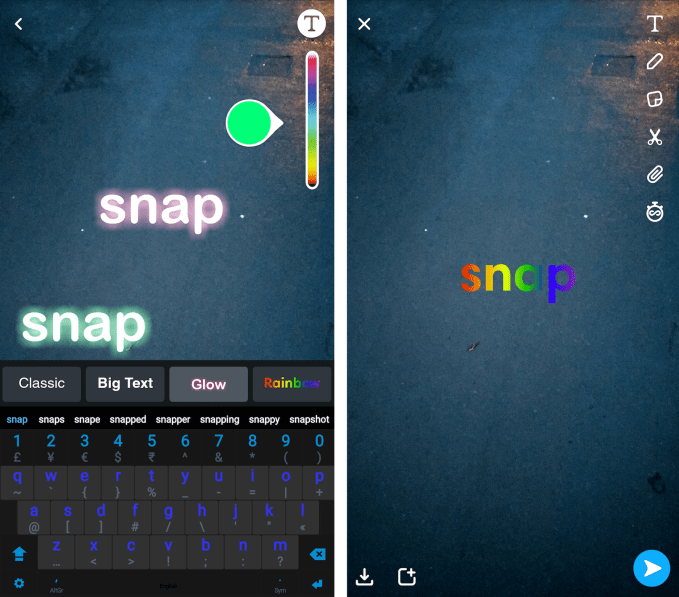 When typing, Snapchatters will see the option to switch between the existing small and big text option, as well as new Glow neon lettering and Rainbow that swashes color gradients across your words. These could help users express ideas with more style or silliness. Text captions are now treated like stickers so multiple captions can be added to the same Snap, just like on Instagram.

Snapchat has been trying to keep the features coming despite being cautious with its massive redesign that received mostly negative reviews from its first users. Instagram’s deep pockets have allowed it to rapidly release Stories and ephemeral messaging features, in some cases leapfrogging Snapchat. We’ll get a closer look during tomorrow’s earnings call about whether Snapchat can reduce its losses, which hit $440 million last quarter, and revive its sluggish growth rate. But for now its best bet looks to be locking down the disappearing messages market where Facebook is still weak.

For more on Snapchat’s latest troubles, check out our piece: “What is Snapchat, now that Stories sharing has stopped growing”