At first glance, genealogy may seem like a quiet hobby you take up in your retirement, but it’s also a big industry, with the likes of Ancestry, MyHeritage, Helix and others all vying for new users. You’d think that there isn’t much these companies can do to really differentiate themselves from each other, but they all offer a slightly different spin on the core theme of building family trees.

In the last few years, both Ancestry and MyHeritage also expanded their business with DNA testing services — not to help you find potential health issues but to help you find your relatives and tell you where your family comes from. Unsurprisingly, that’s creating a number of new business opportunities for these companies.

Earlier this month, MyHeritage CEO Gilad Japhet (pictured above) gave us an unusually detailed look at his company’s finances and the success of its DNA service, which launched just before the holiday shopping season of 2016.

The kit, once it has been processed, gives users a detailed view of their ethnicity, which currently breaks down to about 42 regions, with more in the plans as the company gathers more data from its users. MyHeritage can also use this data to discover other relatives on the service who also took the test and who you may not even know. 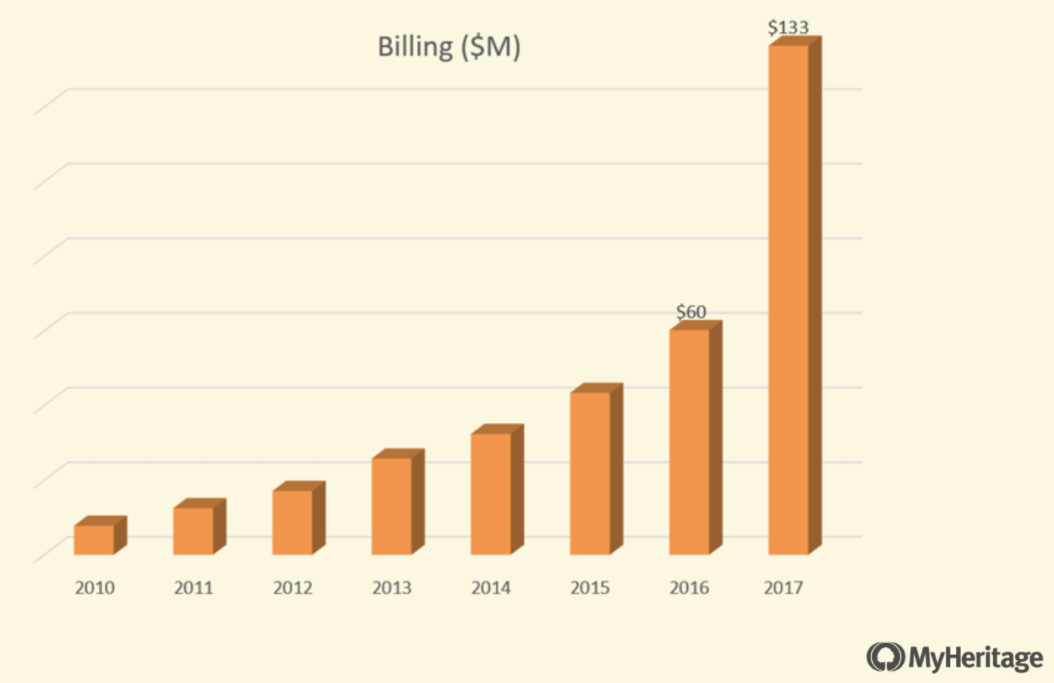 Over the course of the last year, MyHeritage sold more than 1 million DNA kits, and revenue from DNA sales was $58 million. Combined with $75 million in subscription revenue from MyHeritage’s more traditional genealogy business — which now has more than half a million paying subscribers (who pay an average of $150 per year) — the company had total revenue of $133 million in 2017. That’s up from just over $60 million in 2016. The company’s profit in 2017 was $18.1 million.

“You can’t put a subscription under the Christmas tree,” Japhet joked and added that the average user currently buys just under two kits — and he hopes that number will hit three to four in the future. 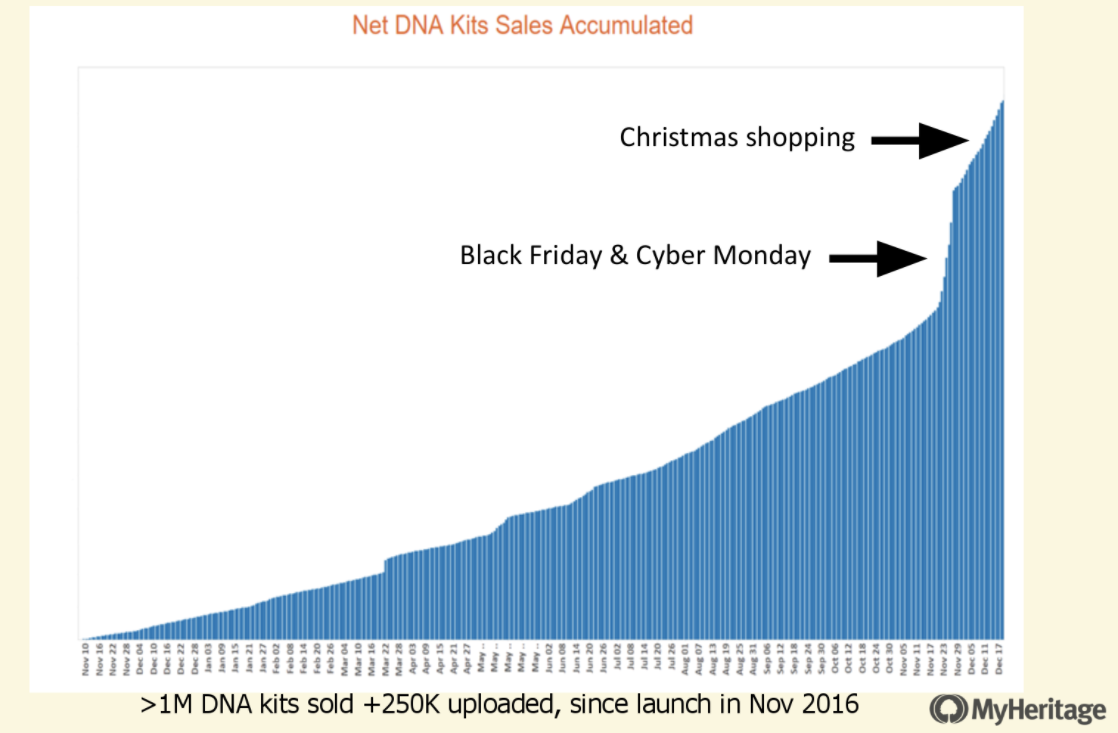 While the DNA sales account for much of the company’s recent growth spurt, it’s worth noting that the company’s subscription business is also growing between 30 and 40 percent year over year, with a retention rate of more than 75 percent.

The two products also reinforce each other, given that those who buy DNA kits often convert to paying MyHeritage users and because its existing user base comprises people who would be most interested in using one of the company’s kits. Current conversion rates for DNA kit users are in the double digits, Japhet tells me — and that makes sense, given that you need a family tree to make the most out of the data.

When the company launched its DNA service in 2016, it was faced with a bit of a chicken and egg problem. Unless you have a lot of data already, after all, you can’t really tell people where their ancestors came from — but unless you can do that, your users aren’t likely to be satisfied with the product. So to kickstart the process, MyHeritage allowed users to both upload existing tests and the company sent free DNA kits to some of its existing users.

“We created a founder population project where we used our family trees to identify families that looked like they had stayed in the same area for a long time,” Japhet explained. It’s the combination of the DNA data and the data in the family trees that then allows the company’s data scientists to build the kind of model that tells you whether your family moved to the U.S. from England or another part of Western Europe. 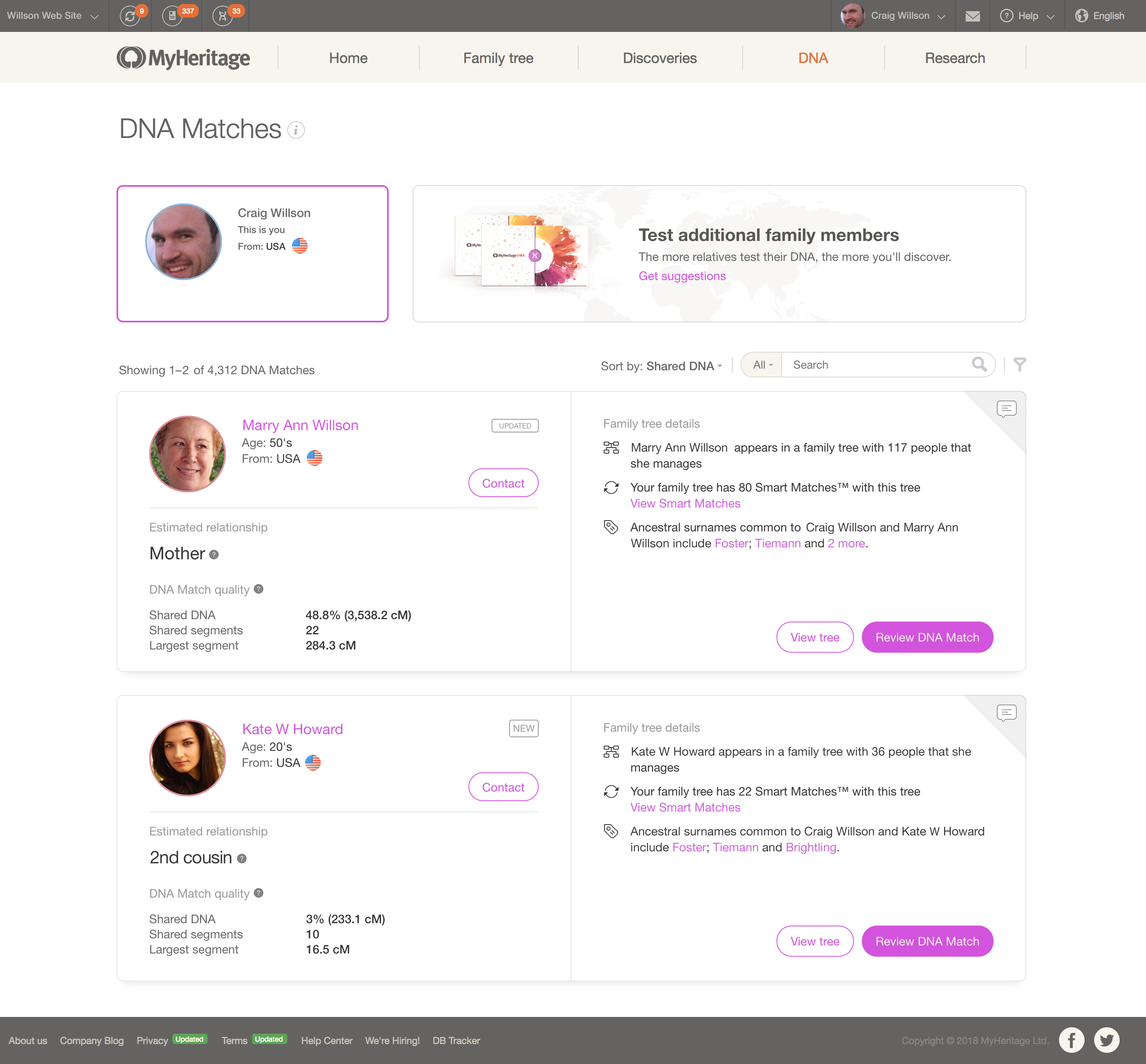 Japhet openly admits that the first results weren’t all that great, because, while the company could match you with direct relatives, it had issues once you hit fourth cousins and similar distant relations. In addition, the service still didn’t have all that much data and it hadn’t yet invested in building out its DNA and data science teams.

Since then, the company went from 310 to 420 employees over the last year and many of them are part of the company’s science team. “DNA is hard and it’s attracting good talent,” Japhet told me. “We built a very strong science team with the purpose of innovating and building the algorithms.” 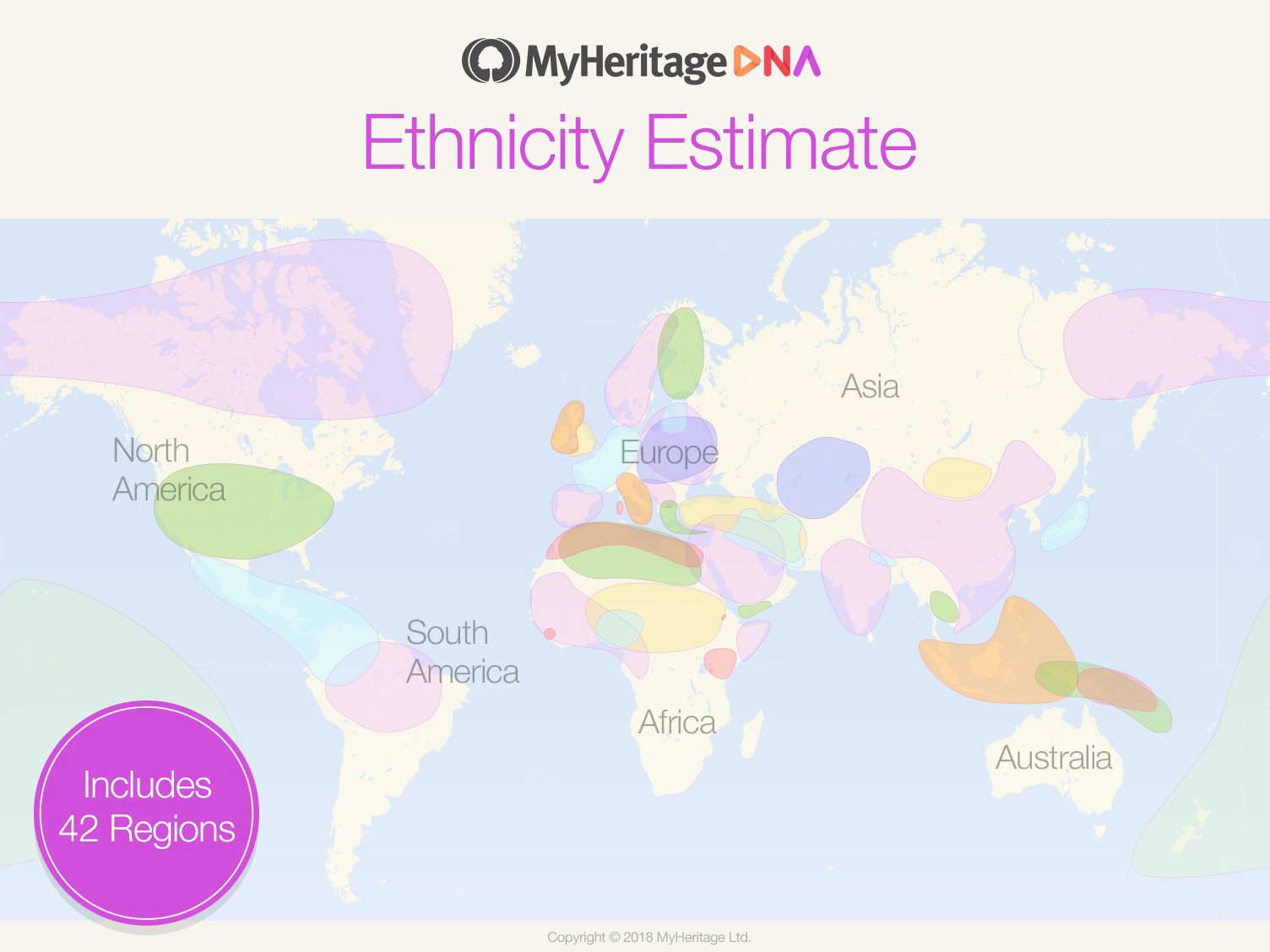 Now that this team is in place, it’s also working on building new products. Recently, MyHeritage has started to run surveys, for example, that will allow the company to link its DNA data with other traits like a person’s eye color or whether they are right- or left-handed. Its users have already answered more than 4 million questions.

“You need a large, trusting user base and you need to make sure you respect that trust and never abuse it,” said Japhet.

Over time, the idea here is to use the DNA results to build as much of your family tree for you as possible. “Some genealogists don’t want a silver bullet and if it doesn’t take 40 years of hard work, it’s not worth it,” Japhet said. “But the more people are drawn into it, the more the value increases. We make family history much more accessible to everyone — including younger people.” 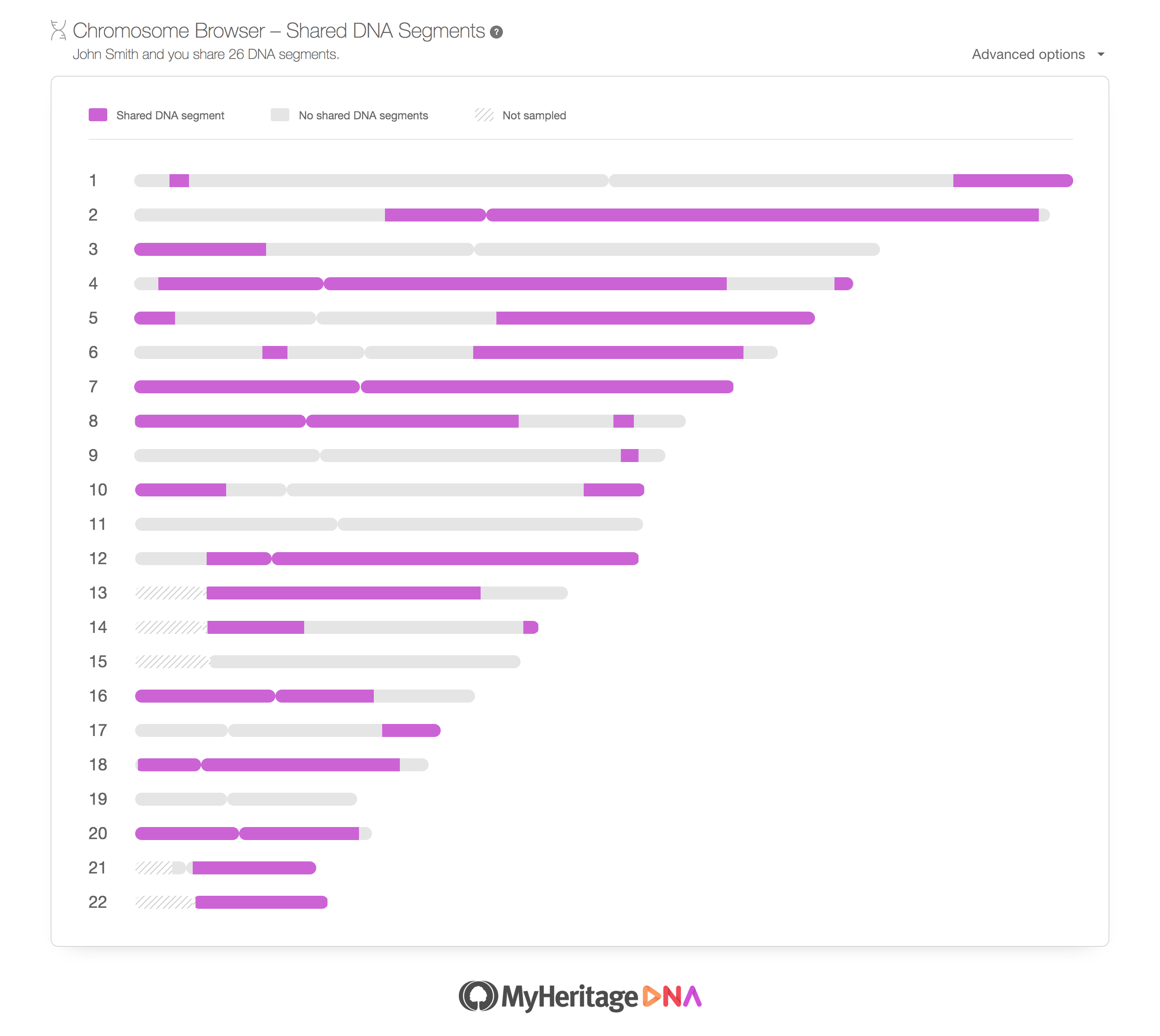 Beyond the DNA project, MyHeritage is also looking to acquire more companies in the future. Japhet noted that he believes the DNA market for genealogy will probably consolidate to maybe three strong players (unsurprisingly, he assumes MyHeritage will be one of them).

The doors have almost closed for new companies to launch DNA kits, Japhet believes, but to continue to grow — and grow geographically — the winners will have to make acquisitions. “It’s difficult to grow across territories that have been covered by others,” he told me. MyHeritage has made nine acquisitions already; it’s probably a fair guess that a tenth is on the horizon.

Most companies don’t share as much of their internal financial data as MyHeritage did. He told me that over the last few months, though, he realized that there wasn’t much to hide for the company.

“I can’t pretend I’m broke and that weakens my position in negotiations,” he said. “But it’s also good that people know what we’ve been up to and that we have ambitious goals.” And judging from the data the company shared with us, it also has the means to make those goals happen.