Amazon has quietly launched a new feature that’s seemingly aimed at helping the retailer better compete with discount shopping apps such as Wish and others. In the Amazon mobile app and on the web, Amazon recently added a new section offering products under $10 that ship for free. Some of the products are also available on Prime, but the feature doesn’t appear to be limited to Prime subscribers.

The retailer didn’t officially announce the addition beyond a brief sentence in the “What’s New” section of its app store update text.

Called “$10 & Under,” the selection can be found under “All Programs” in the Amazon’s app main navigation. This is the area where Amazon regularly trials its newer experiments, like its shoppable Instagram clone Spark or outfit compare feature, for example.

The discount store is also available here on Amazon’s website.

There’s also a category called “Hello 2018!” which is New Year’s themed – that is, it has products that could be used for New Year’s Resolutions, like gym workout clothes, as well as some items for New Year’s parties. (This section should probably be updated now! We do understand that the goal is to have “seasonally relevant” merchandise going forward.)

Or you can view “All” products, which is the default selection if you don’t scroll over to see the various categories.

As you browse the selections, you never reach the bottom of the page – the site endlessly scrolls, similar to Amazon’s curated gift shop, Interesting Finds, which has a similar look-and-feel with its top-level categories and thumbnail images.

Of course, items under $10 are not likely to be of the highest quality, but there’s definitely a market for these sort of cheap (and often direct-to-consumer by way of China) products. In consumers’ minds, the thought, generally, is that the purchase is worth the risk – even if it doesn’t work out, you’re only out a few dollars. But if it does work, you’ll end up with something halfway decent for very cheap.

Plus, there are plenty of things consumers want to buy that don’t need to be high-end purchases – like iPhone cases, costume jewelry, socks, headbands, selfie sticks, and more.

Wish, in particular, has capitalized on this shopping trend with an app that today offers over 300 million items for “thrifty” shoppers from thousands of merchants.

In fact, Wish’s app became the number one shopping app in the U.S. in 2017, in terms of downloads across the iOS App Store and Google Play combined, according to data from App Annie, Sensor Tower, and Apptopia.

Sensor Tower says Wish was ahead of Amazon for the year, with 32.5 million U.S. downloads compared to Amazon’s 29.2 million.

App Annie noted Wish’s #1 ranking was largely driven by the Google Play downloads, which does point to a certain kind of discount shopper interest – iOS users spend more than their Android counterparts, that is.

Wish was also #5 by monthly active users in App Annie’s analysis from November 2017 (part of the holiday shopping season), compared with Amazon at #1. 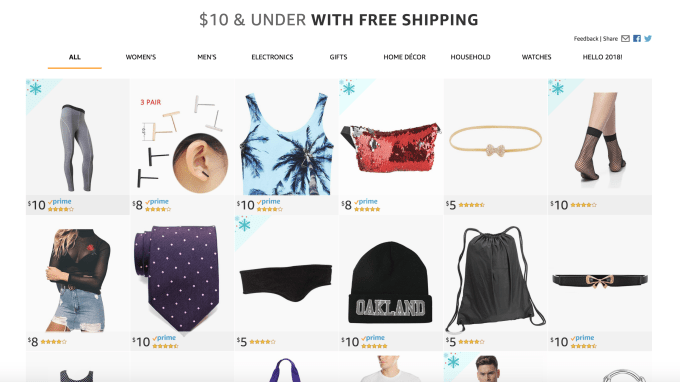 This trend toward low-cost shopping outside of Amazon doesn’t just include Wish, of course –  consumers are also heading to Amazon rival Walmart, AliExpress or even secondhand apps like letgo, OfferUp, Mercari, and others, in order to save.

This is likely of concern to Amazon, and potentially a key reason why it may have launched this “Under $10” shopping feature.

However, the app has another benefit for Amazon, we understand. It’s also designed to increase visibility for products in Amazon FBA (Fulfillment by Amazon)’s Small and Light Program. Businesses that participate in Small and Light can make their products Prime-eligible.

“Amazon is always innovating on behalf of customers and ‘$10 and Under’ is our newest means of delighting customers who love a great value,” a company spokesperson told TechCrunch. “‘‘$10 and Under’ helps customers explore the breadth of low-priced products available on Amazon.”

You can try the “Under $10” store online or on iOS or Android.

Correction: This article has been updated to note the feature is also available on Android, not just iOS, as the update text on the App Store had stated.