Fintech startup NiYO helps salaried employees access company benefits and other financial services, and now it has raised $13.2 million to offer its services to more of the country.

Founded in 2015, NiYO partners with companies (employers) and banks to offer employees the opportunity to access their benefits, such as healthcare or food allowances, through a digital platform. That includes a mobile app for submitting claims, and the option of a credit card.

In the case of credit cards, companies can lock them to specific segments — i.e. paying at hospitals or clinics in the case of healthcare allowances — giving employees more flexibility, and saving the pain of paperwork.

The company claims it can actually increase employees take-home salary by at least 10 percent through the use of tax-exempted benefits.

Beyond payroll and allowances, the startup also allows for insurance, investment, personal credit lines and credit cards. So if an employee wants to buy a big-ticket item or make an online purchase and they don’t already have plastic, they can get one using their employment as the guarantee in lieu of a credit history.

“The addressable market is close to 75 million salaried employees in India, but out of those people only around 20 million have access to a credit card,” Vinay Bagri, NiYO’s CEO and co-founder, told TechCrunch in an interview. “Through our product we can increase this number.” 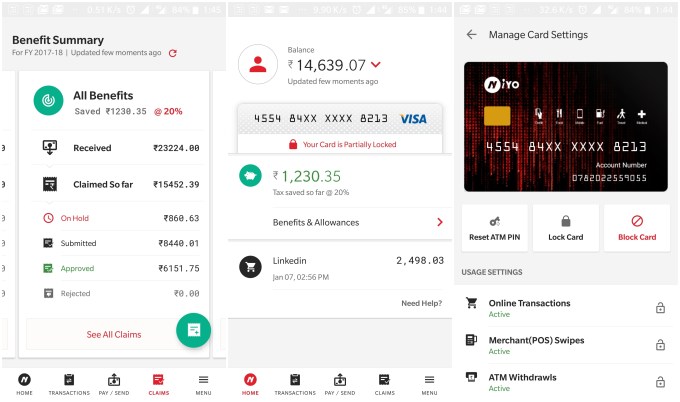 A sample of NiYO’s mobile app

Bagri said the startup’s service is currently used by over 100,000 salaried employees from more than 500 companies. Of that number, he estimates that some 40 percent never had a credit card before.

The credit limit itself is decided by the employer and then deduced from the employee’s salary, either next month or over an agreed period.

NiYO’s user acquisition is method is via the companies it signs up — 90 percent of staff typically sign-up per company brought on, according to Bagri — and through bank partners YES Bank and DCB Bank which also distribute its service.

Now NiYO is planning to expand beyond its current focus on India’s tier-one cities thanks to this Series A round, which comes from U.S. firm Social Capital, JS Capital, and Hong Kong’s Horizons Ventures. Existing backer Prime Venture Partners, which made a $1 million seed investment in 2016, also took part.

But the company is aware that moving out to more rural India necessitates a different approach, particularly with the majority of businesses handling their payroll manually using spreadsheets or (worse still) paper-based systems. That’s why NiYO plans to offer basic payroll software for free in tier-two and tier-three locations as a way to put potential customers in the right shape to use its core services.

Bagri, who spent more than 15 years working at banks including Standard Chartered, said the company got a major boost following demonetization in India, which saw ₹500 (US$7.90) and ₹1,000 (US$16) removed from circulation putting more emphasis and banking, credit and cards.

“NiYO is digitizing the entire employee payroll and benefits value chain, making the process easier and more transparent for employers and employees alike. This is an area that hasn’t seen much innovation in the Indian technology ecosystem, despite the massive addressable market,” said Social Capital’s Arjun Sethi in a statement.