Bugsnag, the cloud service that helps developers find bugs inside their software, announced a $9 million Series B today. They also released a new version of their dashboard that features a stability score than can give customers an unbiased grade of the current stability of their software.

Bugsnag analyzes the code using a set of software development kits that run across the browser, desktop, mobile or backend, giving developers a complete view of how the application will behave across environments. The company focuses on the bug, rather than the number of errors. Instead of giving you a log with each of occurrence of the error, it lets you see how many times the error occurred on a given platform and what percentage of users it is affecting to prioritize which bugs to fix first.

Company CEO and co-founder James Smith says that he created the company because he was having trouble pulling the bug information out of the noise of error logs. He and his co-founders wanted to simplify the approach to understanding bugs in the software they were developing.

His company is geared toward helping developers and product teams understand just what errors they have and if the software is truly ready to release. To that end, the latest version of the software released just today (and probably tested on Bugsnag) includes what Smith calls a “Software Stability Score”. It gives you a sense of just how stable your software is. He likens it to the Nines measurement that cloud vendors use to show how often they are up. Five nines is considered the optimal performance. Each company will have its own threshold that balances stability and getting it shipped. 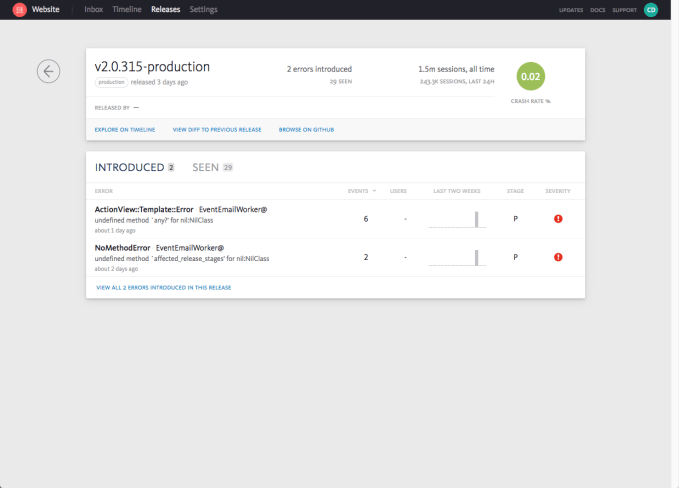 He believes that using this objective score — which is derived from the number of crashes, the number of sessions and what he calls some “secret sauce” — developers can better judge when software is ready to ship. Many studies have found that users are an impatient bunch and if the app is crashing, they’re bailing. That’s why it’s important to understand not just what’s causing crashes, but also the overall stability of the application over time.

The company has been doing pretty well so far. Founded in 2013, it currently has 37 employees spread between San Francisco and the UK, where the founders hail from. While they use a freemium model to attract developers to the tool, they have approximately 4500 paying customers including Shopfiy, which has over 1000 software engineers using the service, according to Smith. Other customers include Pandora, Lyft and Airbnb.

Up until now the company has relied on mostly on inbound marketing driven by the freemium product, but as they grow they want to use the new cash to begin building out a sales and marketing team to help sell the product inside larger organizations that usually require relationship-driven sales.

Note: After we published this story, Bugsnag let us know that the funding announcement described in the article actually closed in February, 2017.