Last October, Facebook extended the usage (and flexibility) of Instagram Stories — the Snapchat-like feature that lets you patch together photos and videos into a slide show — by making it easy to directly post a Story to Facebook. Now Facebook is looking at how to bring WhatsApp into the fold.

TechCrunch has learned and confirmed that the company is now running a test to let users post their Instagram Stories directly to WhatsApp, as a WhatsApp Status, a corresponding Snapchat-like feature in the latter messaging app where decorated photos, videos and GIFs can be posted with encryption, disappearing after 24 hours. An Instagram Story posted as a WhatsApp Status also becomes encrypted like the rest of WhatsApp.

“We are always testing ways to improve the experience on Instagram and make it easier to share any moment with the people who matter to you,” a spokesperson said.

From what we understand, the feature is currently being tested with a small number of users.

It’s based on publicly available code that WhatsApp makes available to integrate WhatsApp messaging with third-party apps on the web or on Android. Users get an option to tap to share to WhatsApp from the Instagram sharing screen, but they still have to press “send” in WhatsApp to post the story.

The reader who tipped us off on it is based in Brazil, where a local blog has also been reporting several sightings in the wild, one of which (on Android) is pictured here, with the Instagram Story on the left, and the WhatsApp Status cross-posted on the right (note the Instagram icon in the corner). 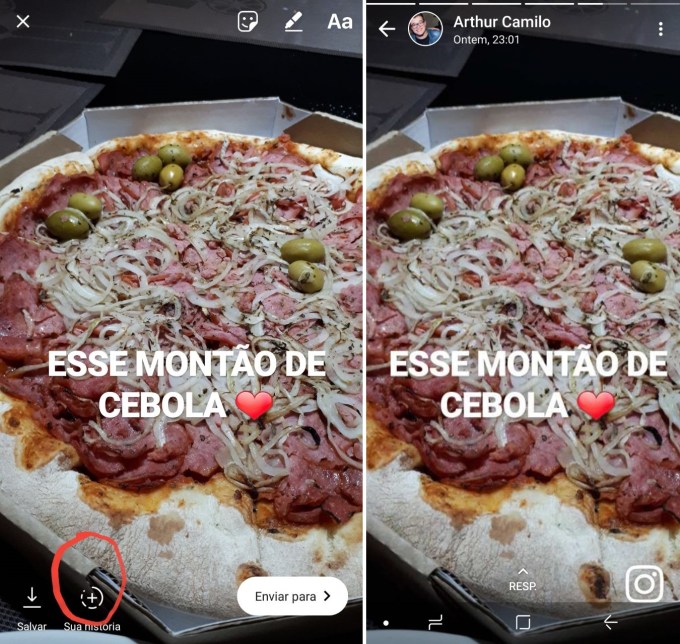 (Coincidentally, the Instagram-Stories-posted-to-Facebook feature was originally tested in Portugal, another Portuguese-speaking country.)

The first of these seems simple enough: it’s to give one more bit of functionality and therefore usage to Instagram Stories, which are already very popular and as of last June were outstripping usage of the Snapchat product they were designed to clone.

Facebook tells me that as of last November there were more than 300 million daily active users of Instagram Stories. Adding the ability to share to WhatsApp will give those Stories even more ways of generating traffic, especially in countries where WhatsApp is already hugely popular and outstripping usage of Facebook or its Messenger app.

The second reason could be to help spur more usage of WhatsApp Status. This was ostensibly the reason for why Facebook enabled Instagram Story sharing to Facebook, whose own Stories feature I personally never see get used that much and has been described by my colleague Josh as a ghost town. The same isn’t the case for Status, though, which Facebook tells me is seeing similar levels of usage to Instagram Stories, also with more than 300 million DAUs as of November.

(The relative popularity of all these apps and features is also one drawback to the cross-posting feature: inevitably, there will be people who use them all, which might lead to people getting bored and annoyed at seeing the same content everywhere they look. Ideally Facebook is also working on a way of calibrating Stories, so that if you’ve already seen one in one app, like Instagram, the same exact thing won’t be popping up for you again in a Facebook Story and then a WhatsApp Status.)

The third (and maybe most interesting) reason for testing this feature is that Facebook has been steadily working on ways of not only extending the time spent in specific apps, but also how to better usher people from one Facebook-owned app to another, encouraging usage even when the apps are not open.

This has taken some different forms so far. Last May, the company started testing cross-app notifications between Facebook, Messenger and Instagram to alert people to when they had mentions or messages in any of them. Then last month, Facebook launched a click-to-WhatsApp messaging button in Facebook ads, monetizing WhatsApp but not on WhatsApp itself. And there have also various other “regramming” tests on iOS.

Encouraging Story posting between Instagram and WhatsApp Status is notable because it gives a little more social media spin to WhatsApp, which Facebook acquired in 2014 for $19 billion with the explicit promise that it would stay independent of Facebook. As it happens, the new feature that’s being tested does bypass Facebook’s flagship apps completely.

Together, this could all help Facebook grow its overall engagement and traffic footprint. Conversely, it also could spell one more way to destabilize Snapchat and potentially any other app that has any lesser infrastructure to keep your content getting seen by the people you know, whatever app they happen to be using.