There are plenty of humanoid-looking robots out there, but very few actually have bodies that are particularly analogous to our own when it comes to moving and interacting with the environment. Japanese researchers are working to remedy that with a robot designed specifically to mimic not just human movements but the way humans actually accomplish those movements. Oh, and it sweats.

Kengoro is a new-ish robot (an earlier version made the rounds last year) that emphasizes flexibility and true humanoid structure rather than putting power or efficiency above all else.

As the researchers explain in their paper, published today in Science Robotics:

A limitation of conventional humanoids is that they have been designed on the basis of the theories of conventional engineering, mechanics, electronics, and informatics.

By contrast, our intent is to design a humanoid based on human systems — including the musculoskeletal structure, sensory nervous system, and methods of information processing in the brain — to support science-oriented goals, such as gaining a deeper understanding of the internal mechanisms of humans.

The paper uses Kengoro and similar robot, Kenshiro, as examples of how to accomplish that intent; indeed, the whole issue of Science Robotics was dedicated to the concept of improving anthropomorphic robotics.

It’s important, they explain, to imitate human biology wherever possible, not just where it’s convenient. If your robot has powerful arms but a stiff, straight spine and no neck, that may be better for lifting heavy items — but it just isn’t how humans do it, and if human-like motion is actually desired, you essentially have to put in our weaknesses as well as our strengths. 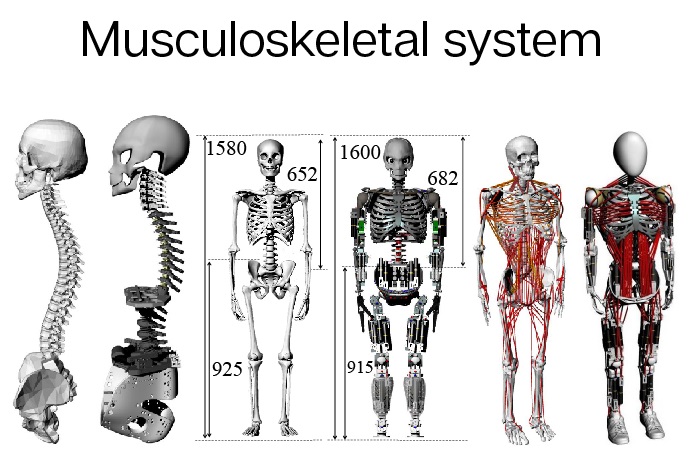 And truly human-like motion should be desired, if a robot is supposed to exist in human-centric environments and interact with people.

After putting together Kengoro with muscle, joint and bone-like arrangements of motors and struts, the researchers put these similarities to the test by having the robot attempt a number of ordinary exercises, from push-ups to calf raises.

All the way down! Are you a robot or a soft, weak human?

As you can see, he’s a little jittery (“he” because the robot is modeled after an average 13-year-old Japanese boy). He probably should have stretched first. Still, he probably did more crunches for this article than I did this year.

The sweating thing probably deserves a little explanation. Essentially the motors have water running through them to help cool them off as they work, and they can expel that water through artificial pores in order to more quickly release heat. It’s not exactly a critical feature, but if you’re going to mimic humanity, you might as well go all the way.

It’s an interesting and unsurprisingly complex endeavor that Yuki Asano et al. are pursuing, but the results already seem worthwhile, and the applications they envision are promising. The “human mimetic humanoid” project is ongoing, so expect more from Kengoro in the near future.