Match Group, which houses a large portfolio of dating app brands – including most notably, Tinder, Match, and OKCupid – is prepping a notable upgrade to one of its older brands: Plenty of Fish. The dating service, often dubbed ‘POF’ by its users, was founded in 2003 then sold to Match Group in 2015 for $575 million. But it has since remained fairly quiet, in terms of the state of its business, and has been slow to roll out upgrades even as Tinder soared.

That’s now changing, the company says. For starters, POF is gearing up to launch a collection of new features designed to bring its app into the more modern age of dating. The launch follows a significant revamp of the app’s user interface this summer, which will soon extend to the web.

This new group of features, which POF is calling “Conversation Powers,” includes the addition of voice messaging, video calling, and the ability to share photos in chats. In the near future, it will also include the ability to share GIFs in your conversations and add illustrations to photos, like doodles and stickers.

What’s interesting about the way these features are launching is that they’re not just switched on whenever you’ve matched with someone. Instead, POF will trigger your “Conversation Powers” after you’ve chatted with a match for a period of time. 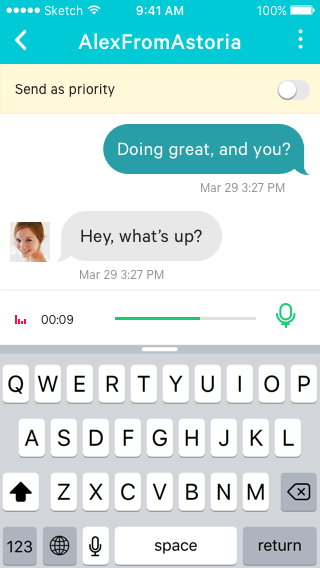 These sorts of voice and messaging features are common today on social media and chat applications, but haven’t all made their way to the world of dating apps.

“When it comes to the conversation experience, dating apps haven’t traditionally focused on it. There’s a lot of attention and R&D on matching with someone and swiping and all that,” says CEO Hesam Hosseini, who joined the company from Match Group, post-acquisition. “But when it comes to actually being in a conversation, dating apps are several years behind social apps. Plenty of Fish is poised to lead the charge on that,” he adds.

Of course, some dating apps have added GIFs, emojis, photo sharing and other features, but even Match Group’s lead app, Tinder, doesn’t have a full lineup.

It’s interesting, then, that POF would get all these features first – especially because its demographic skews older. (POF users tend to be in the 30 to 40 age range, notes Hosseini.)

That being said, Hosseini believes features like this are becoming common.

“As platforms like Facebook adopt them, they’re going to become features you expect,” he says. “They’re on their way to becoming more mainstream.” 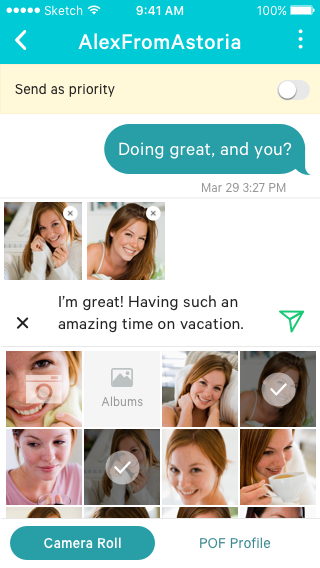 Beyond simply updating the functionality and user experience to stay current and on-trend, the new additions are also meant to offer POF users ways to better personalize their interactions and connect.

Some dating app users – particularly older ones – prefer voice over texting; they’re often asking to hop on a call with a match ahead of scheduling a meetup. But not everyone wants to share their phone number with a stranger, which is where the voice calling option comes in.

Instead of dialing a phone number, matches can call each other in the app. Or for a middle-of-the-road approach between texting and calls, they could use the voice messaging feature instead.

The bigger picture is that POF aims to differentiate itself from Tinder and others going forward by doubling down on conversations – something that’s already a key focus for the company.

The app is the second largest U.S. dating app in Match’s portfolio, the company claims, with 150 million registered users worldwide. It’s also the second largest in terms of monthly users, behind Tinder. (POF doesn’t share active users, however). And it claims to have the most conversations compared with other dating apps, with 2.5 million taking place on its platform daily.

The company also says it was seeing $80 million in revenue at the time of its acquisition, and has been growing that in the double-digits since.

GIFs and illustrations aren’t being rolled out until 2018, but messaging, calling and photo sharing features are arriving today on iOS and Android. They will be also be available on the mobile web and desktop later this year.

The launch of the new features follows a couple of other recent updates for POF, including last summer’s launch of a conversation-starting utility called Spark, which lets you comment on an individual part of a user’s profile (like Hinge). It also just integrated with Google Home.

Despite these changes, POF along with other older apps are still challenged in terms of overcoming users’ preconceptions. If people remember it as a dated app with an older crowd, they may never bother with it again, gravitating to newer apps like Tinder, Bumble, or Hinge, for example.

That said, many people understand that dating is a numbers game – meaning, the more places you play, the more people you meet, and the more shots you have at ditching the apps for good.