At a special AI-focused event today in San Francisco, Microsoft announced a number of feature updates to Bing that it hopes will make results smarter by leveraging the company’s AI research, as well as a new partnership with Reddit.

The company laid out the ways it’s injecting AI-smarts into its Bing search engine, which a Microsoft exec reiterated is actually used by a good amount of people — whether they know it or not, through partnerships with Yahoo. The company says that one-third of desktop search results in the U.S. are done on Bing.

The updates are focused on bringing more conversational, nuanced answers to users in the “cards” UI being used by competitors like Google. New features starting to roll out today include: Intelligent Search, Intelligent Image Search and Conversational Search.

“AI has come a long way in the ability to find information, but making sense of that information is the real challenge,” said Kristina Behr, a partner design and planning program manager with Microsoft’s Artificial Intelligence and Research group.

Intelligent and Conversational Search are pretty much just focused on ensuring that Microsoft stays competitive with Google in integrating machine learning-leveraged insights into search interpretations. One of the areas that they’re looking to one-up Google interestingly is in giving users the opportunity to get multiple viewpoints on some questions, so if you ask Google whether a certain type of food is healthy they may tell you what it’s good for and where it might not be.

The search service isn’t applying this to some of the more controversial queries; a quick search regarding marijuana health effects didn’t surface an Intelligent Search card, same for questions regarding some hot-button topics like abortion.

Intelligent Image Search is a pretty interesting evolution, allowing users to dive into searches so that you can not only find a photo of a celebrity but you can find more images of a piece of jewelry they are wearing. This works by just tapping a “search within image” button and it assumes what you’re looking for; it’s not perfect, but it’s better than I thought it would be.

Additionally, the company announced a partnership with Reddit to surface results from the site more effectively. Reddit co-founder Alexis Ohanian announced that the two were collaborating to integrate Reddit content more directly into Bing search results, funneling info from Reddit crowd-sourced AMAs and other posts into Bing. You can ask Bing things like, “How accurate is HBO’s Band of Brothers?” and highly up-voted responses will be right there for users on Bing.

“We see this as a new window into helping people discover new communities,” Ohanian said. “We can make both of our platforms better as a result.”

The partnership is also focused on taking the detailed, highly-localized info from Reddit posts and funneling it into Bing searches so that users with similar prompts can be given more nuanced answers. Reddit’s UI is famously not that great on desktop, so Microsoft distilling the wall of text in a more effective manner is pretty essential. 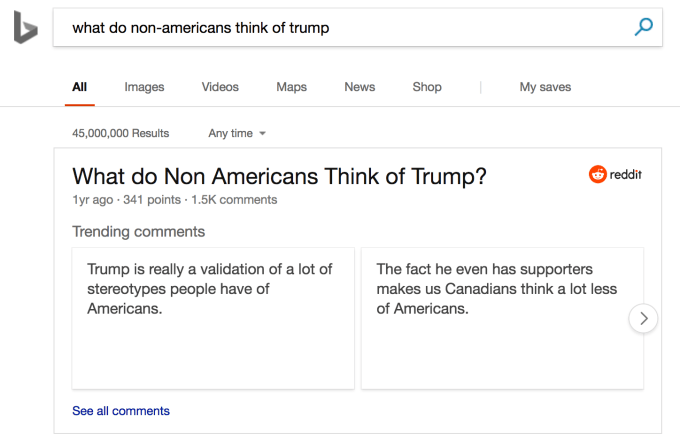 Bing may have a more established presence on desktop search than some may assume, but there was oddly little said about mobile Bing search and how these new features may integrate into mobile browsers. Leveraging Reddit’s data could be a huge point in Bing’s favor, though there are few sources that can be just as capable of surfacing brilliance as controversy.