Last November, Facebook launched Instant Games, a new platform for gaming with friends inside the Messenger chat app. Today, the company is announcing a couple of notable new features for this gaming platform, including support for live streaming via Facebook Live and video chatting with fellow gamers.

The idea with Instant Games is to boost people’s time spent in Messenger by giving them something else to do besides just chat.

It also serves as Facebook’s newest attempt to return to dominance in social gaming. The company’s gaming platform years ago had earned a peak of a quarter-billion dollars per quarter on its 30 percent tax on in-game purchases, and it leveraged Facebook’s network effects to help games go viral.

But with the shift to mobile, Facebook’s position in gaming declined. These days, people spend more time gaming in native mobile apps built for iOS and Android devices.

When Instant Games first launched it offered 20 games across 30 markets, including titles like Pac-Man, Space Invaders, and Words With Friends Frenzy. Now that number has grown to over 70 games from more than 100 developers worldwide, the company says, including recently launched Tetris.

Posted by Messenger on Wednesday, December 6, 2017

To mark its one-year anniversary, Facebook is also debuting a couple of new features for its Instant Games: live streaming and video chat.

The feature, powered by Facebook Live, lets Messenger users broadcast their gameplay to their Facebook Page or profile. To use live streaming, you just tap on the new camera icon at the top right of the screen while gaming, then add a short description to be shared alongside your post. To start recording, you press the “Start Live Video” button. 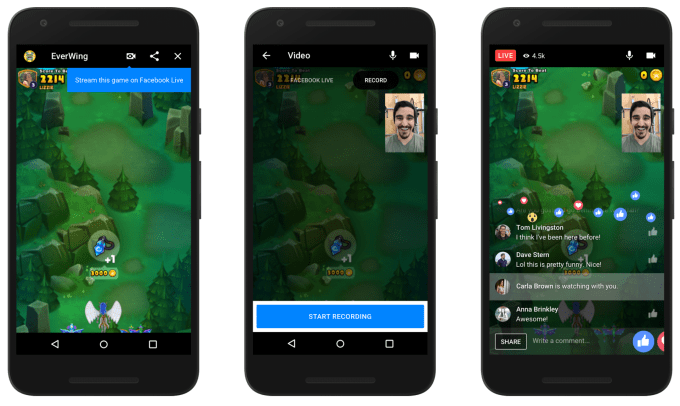 The live broadcast is then shared to your Page or profile. When it ends, friends and fans can watch the saved recording.

With the live streaming feature, Facebook is playing catch up rivals like Twitch, YouTube and Microsoft, all of which today offer their own tools and services for live streaming games. However, in Facebook’s case, the addition is more casual – it’s more about sharing with friends, not monetizing a community through subscriptions, game sales, or custom chat icons, as you’d find on Twitch or YouTube, for example. (At least, not yet). 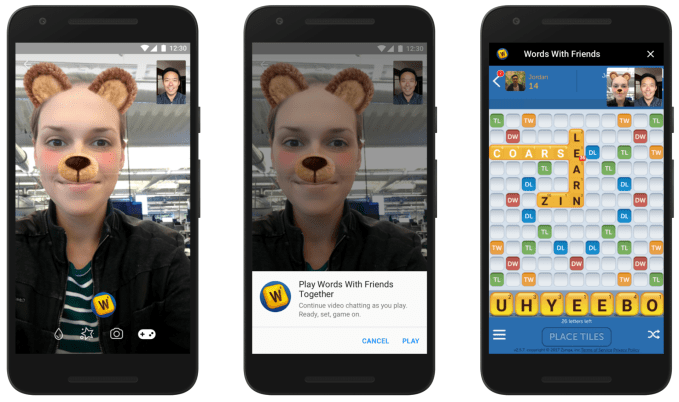 Facebook says it will soon start testing a feature that lets users video chat while gaming, as well. The feature will initially debut next year in Zynga’s Words with Friends, before expanding to other titles.

According to the company, over 245 million people video chat every month on Messenger. That makes for a large potential audience for a video chatting feature, which adds interactive element to the gaming experience. The feature will also challenge other popular video chatting and hangout apps popular with teens and young adults, like Fam, the app for group video chat via iMessage, for example, or Microsoft’s Skype, among others.

As part of today’s news, Facebook shared a few stats from its gaming partners. You can see these below:

Posted by Messenger on Wednesday, December 6, 2017