Caspar Health, a startup launching today at TechCrunch Disrupt Berlin, wants to make access to rehabilitative care easier and more accessible. The digital platform allows doctors to assign customizable therapy treatment plans to patients following an injury, surgery or other medical event, like a stroke, which patients can then access using an app on their mobile device.

The company was founded two years ago by longtime friends Maximilian Michels, and serial entrepreneurs Benjamin Pochhammer and Maximilian von Waldenfels, who sold their last company Food Express to Takeaway.com.

Michels, who has a background in healthcare, came up with the idea for Caspar Health because he saw a need to make first-class healthcare something that’s available to anyone – even if limited by geography or a lack of therapy providers in the patient’s area.

“He realized, via a research study [the hospital he managed] did with a large reimbursement stakeholder, that the way rehabilitation has been conducted is still very ineffective, and there’s no digital component integrated into the patient treatment procedure,” von Waldenfels explains. 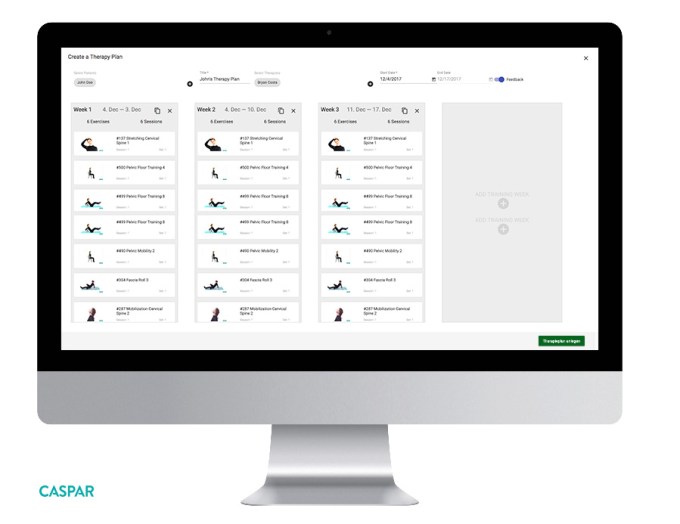 To use the system, a doctor or therapist would log on to the platform after seeing the patient and confirming their diagnosis. For example, they may want to assign specific treatments or therapies for someone recovering from knee surgery, back pain or a heart attack. After entering the patient’s information and medical condition, Caspar Health automatically generates a treatment plan for the patient, which the doctor can then optionally customize to meet the patient’s needs.

These treatment plans are created in-house and offer everything from instructional videos (e.g. physical therapy/exercises, tutorials on how to use crutches, etc.), to information on the illness or injury itself. Patients can read the information and watch videos from a mobile application that runs on their phone or tablet, and give feedback about how the exercise or other therapy went to allow doctors to adjust the plans accordingly. 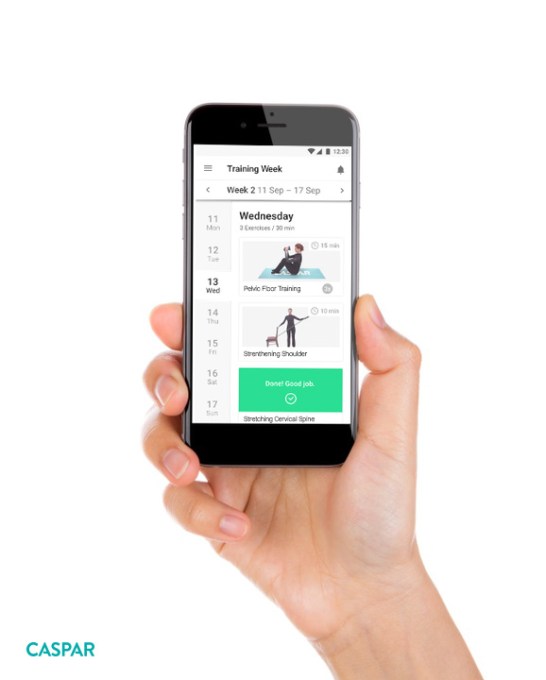 At launch, there are some 1,000 videos available and the system is in use in 64 hospitals across Germany, including a couple of the largest hospital groups. This makes Caspar Health accessible by over 100,000 potential patients. So far, 6,500 have signed up.

Caspar Health is sold as an enterprise software-as-a-service subscription, where facilities pay a monthly subscription fee as well as a fee per patient. Notably, Caspar Health’s treatments are reimbursed by the largest reimbursement stakeholders, meaning the medical facilities are receiving the same amount of money per session as a face-to-face treatment.

The larger goal is to make Caspar Health available to other markets outside Germany, especially those where there’s a large population that doesn’t have access to therapists and doctors for their condition, or who can’t afford in-office visits.

The startup is backed by 3 million euro in seed funding from Atlantic Labs (Christophe Maire), Think.Health, and other family offices.