If you’ve ever quickly swiped through Tinder, you know that sometimes your fingers can get away from you – and, all of a sudden, you’ve Super Liked someone without meaning to. Oops! Tinder today is addressing that problem with a new feature now testing in select markets that will make Super Liking a more intentional experience. Called “Super Likeable,” the feature will pop up at random times in the app to offer you a free Super Like which can be used on one of four people presented on the Super Likeable card.

To be clear, Tinder’s decision to launch Super Likeable isn’t because of the problem of accidental swipes up – but that could an beneficial side effect. Instead, the goal with Super Likeable is to present potential matches users might swipe on based on their previous swiping behavior.

While the original Super Like was designed as a way to signal your interest in a potential match was stronger than others, it’s been a fairly controversial feature to date. In addition to the errant Super Likes, some people say Super Likes make them feel uncomfortable, and those sending the Super Like come across as creepy. Others say it has an element of desperation to it, so they opt not to use it.

But Tinder’s own data indicates that Super Likes are highly effective, as they increase your likelihood of matching by three times.

With the new Super Likeable feature, using the Super Like option feels more like a game than a virtual version of a too-intense stare across the room. 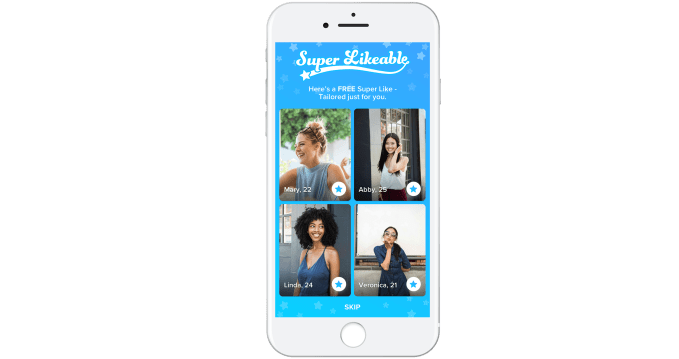 Super Likeable will only pop up on occasion, says Tinder. That makes it feel more like a bonus, and could increase its usage. When you see the Super Likeable screen appear, you then get to use one extra Super Like that can be sent to one of four people presented on the card.

Typically, free Tinder users only receive one Super Like per day, while paid subscribers receive five.

But what’s interesting about the new feature isn’t just the extra Super Like provided, it’s the selection of people Tinder has picked out.

Tinder says the experience itself is powered by artificial intelligence that helps select the people it thinks will be “of special interest to you.” The company didn’t go into detail about how it’s making its choices here, but Tinder tell us, broadly, it’s using a history of your interactions on the service to figure out who sparks your interest.

“At Tinder we are focused on creating simple, fun and useful experiences for our users around the world,” says Brian Norgard, Chief Product Officer at Tinder. “We are fortunate to have an incredible, growing artificial intelligence team and we are experimenting with a variety of ways — Super Likeable being one of them — to delight users by bringing them the best in-app experiences through innovation. It’s an ever-evolving space and we are beyond excited to keep innovating,” he says.

The new Super Likeable feature isn’t publicly available to all Tinder users at this point, as it’s just now being testing in NYC and L.A.