Streaming services like Spotify have turned playlists into one of the main ways to discover new music, but I’d argue that they’re missing some of the personality of traditional radio — the kind of radio where I knew not just the names of my favorite DJs, but also what kind of music they liked and random details about their life.

That’s the experience that Stationhead, a startup founded by musician Ryan Star and his childhood friend Jace Kay, is trying to bring to the streaming music world. The smartphone app allows anyone to turn their playlists into a personal radio station.

While your station will continue playing automatically when you’re not around, Star told me that the live experience is key. You’re not just sharing a playlist but hosting a broadcast where you introduce the songs and talk about anything else that’s on your mind. Listeners can “bite” songs to add them to their own stations, and you can even call those listeners up to have live, on-air conversations.

“Music is the social glue that gets them to talk,” Star said.

Another crucial element of Stationhead’s approach is the fact the startup doesn’t have to make its own deals with the music labels. Instead, it integrates with existing streaming services — it launched with Spotify and recently added Apple Music. 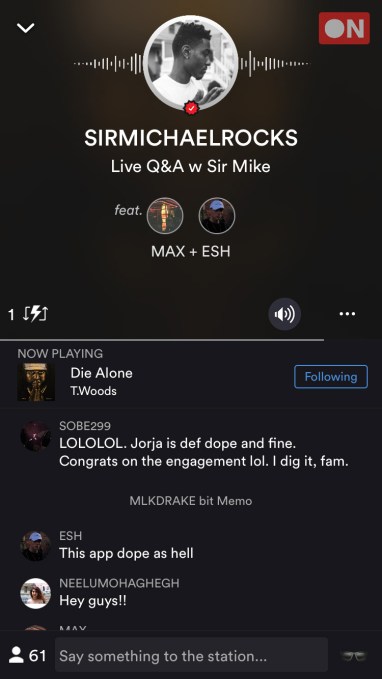 Yes, that means you’ll need a subscription to one of those services in order to listen, but it doesn’t have to be the same one as the DJ — if I’m broadcasting from my Spotify account and you’re listening on Apple Music, Stationhead works behind the scenes so that we’re both listening to the same song without a hitch.

“Because we’re agnostic, we go cross platform, there’s no barrier to be transmitting out to everybody now,” Star said.

He acknowledged that there are rare cases where a song is available on one service but not the other. When that happens, Stationhead will just show you a “Sad Bowie” error message until you get to the next song.

For individual DJs, this could be a fun way to share the music you love, interact with friends and strangers — and eventually, maybe even make some money.

And for musicians, this could present an alternative way to get their music heard. While the old “payola” system is illegal, Star argued that artists still need to spend an extraordinary amount of time and money in order to convince broadcasters to play their songs. In fact, Star said that one of the reasons he created Stationhead was because of the tremendous costs he was facing as an independent musician trying to get his music played.

Stationhead is currently available on iOS. You can download the app here and use the code TECHCRUNCH to sign up. Star said he plans to add more social features and launch more broadly early next year.