Visitors to the TechCrunch Shanghai even this week were greeted with a sleek silver high-performance car at the entrance. It’s right there above these words at the start of this article.

This is EP9 produced by NIO, the Chinese electric carmaker with over $2 billion in investment capital from the likes of Tencent, Baidu, IDG and more. Striking though it may be, the appeal of the car is more than just looks. That’s according to NIO’s VP of User Development, Izzy Zhu, who sat down with TechNode’s Wang Ping to talk about the role that user experience plays at the company and in its products.

Founded in 2014 and formerly known as NextEv, NIO just celebrated its third birthday last week. The company is headquartered in Shanghai but it is truly global. Product design comes from a team based in Munich, Germany, while its autonomous driving research and development staff are based in San Jose, U.S..

“The automotive industry has entered a key turning point, both in terms of technology and consumer adoption,” Zhu said when asked about why several new electric vehicle companies in China have formed in that time period, for example, Youxia Motors and Singulato.

Having worked for BMW, Lexus, and Amazon, Zhu has gained experience in how traditional carmakers operate and also how a (relatively) new internet business works. He said that NIO is a company that encompasses all of these aspects.

“I believe NIO will make a car that is not only good in terms of performance but also in software. But [sales] quantity will not be the driving force behind the [electric vehicle] industry, it’s the user experience,” Zhu said at TechCrunch Shanghai. “No matter the product hardware, nor the software, the user experience must be the focus.” 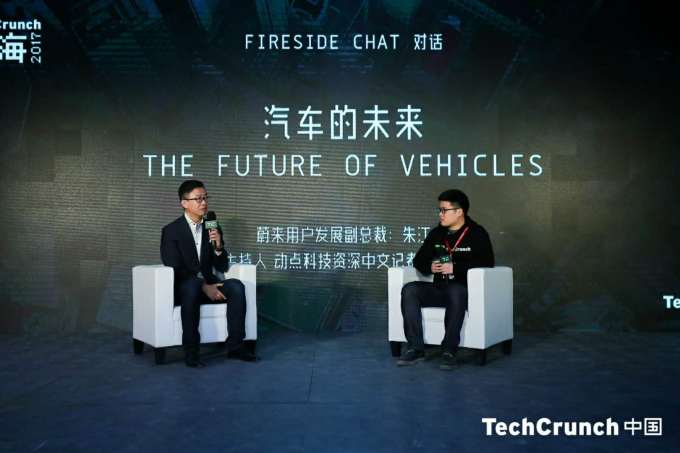 At a strategic level, Zhu explained that the traditional car industry sales model is distributor centric since carmakers don’t have a direct relationship with customers. Taking a different approach, NIO has reined in most, if not all, of the functions that distributors used to perform. That ranges from sales to the long-term maintenance of vehicles.

“It’s definitely capital intensive,” Zhu said on stage when asked about the NIO business model. “But we think that it is a worthwhile investment.”

It’s okay, NIO has cash to burn. It has gone through four rounds of funding, receiving a total of $2.1 billion including a reported $1 billion investment from Tencent and others earlier this month.

However, for all the investor capital, the only tangible result so far comes from NIO’s racing arm. The company has been involved with Fédération Internationale de l’Automobile or FIA Formula E (the international championship for electric vehicles) from its inception in 2014. In the 2014-2015 season, the driver for the NextEv-branded China team — ex Formula 1 racer Nelson Piquet Jr. — finished the season as champion.

Racing is an exciting spectator sport but it doesn’t impact daily lives. NIO hopes it can make that jump. It will soon test the market with the launch of the ES8, its first mass-production SUV model.

The ES8 retail price is estimated to be around RMB 500,000 — a figure that was neither confirmed nor denied by Zhu on stage at TechCrunch Shanghai.

The ES8 will be targeted at the same customers of Tesla’s Model X, which currently retails in China from RMB 894,000. While the ES8 may have a price advantage, it lacks the brand and the tested performance of Tesla cars. 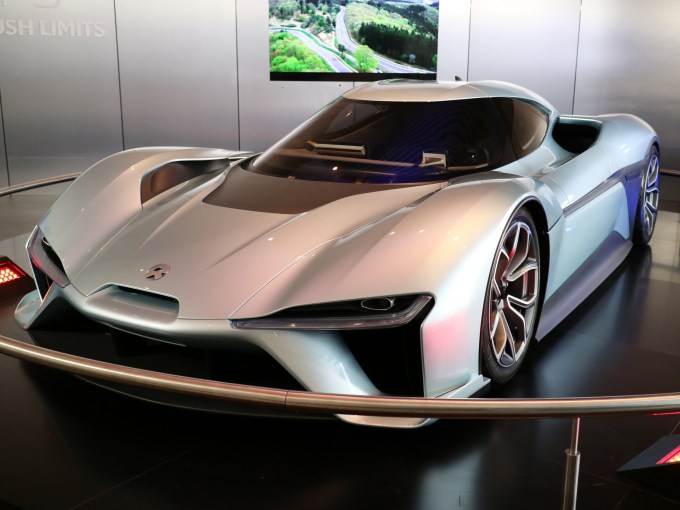 The EP9 on show at TechCrunch China in Shanghai this week

But for Zhu, the concern is something more basic than NIO’s well-established competitors. China is the world’s largest electric vehicle market and a potential ban on fossil fuel vehicles has been widely mooted, so there’s plenty of room for multiple players. Improving customer confidence in electric cars, however, is the NIO executive’s most pressing issue.

“The biggest obstacle for today’s consumers to [electric vehicles] is the problem of charging,” Zhu said at TechCrunch Shanghai.

“Currently, it’s very inconvenient to charge, which is determined by the state of national infrastructure. [In the future,] NIO will provide cloud computing and data to connect our charging substations, the nation’s fast charge stations, and a service team that provides a mobile charging vehicle into a complete service system,” he added.

Note: An earlier version of this article mislabeled the second image of the EP9 as the ES8.