Microsoft Office is now available for Google Chromebook users through the Google Play Store – a notable addition, given the two companies offer competing products in terms of office productivity software. Neither Google nor Microsoft are making a formal announcement about the Office applications’ arrival on Chromebooks. But we understand the Office Android apps will only be free to users with specific devices, while others will need to subscribe to Office 365 to take advantage of the apps.

Chrome Unboxed was the first to spot the arrival of Office via Google Play on Chromebooks.

This is the first time Office has been available to Chromebook users through Google Play as a general release, though a report today from ZDNet notes that some Chromebook users had been previously able to get Microsoft Office from the beta version of the Play Store.

The apps’ arrival is not too surprising, though, as Microsoft had said last year it would make full Android versions of Microsoft Office apps available to all compatible devices when the Google Play Store for Chromebooks exited beta. 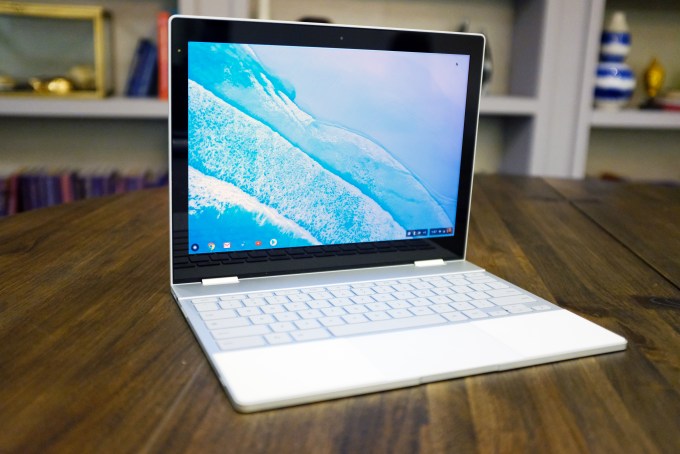 As you may recall, Google made Chrome OS capable of supporting Android applications last year, but that support had been limited to select models.

Things began to change in 2017, when the company promised that all new 2017 Chromebook launches would support Google Play. It then delivered on that promise when devices like Samsung’s new Chromebook and, more recently, Google’s flagship Pixelbook arrived.

Despite these changes, Microsoft hadn’t offered an updated timeline for publicly bringing its Office Android apps to Chromebooks. That left some to wonder if the apps’ arrival was still forthcoming, while others explored workarounds.

Now the Office Android apps for Chromebook are here, but there are a few caveats we should note.

For starters, just because all newer Chromebooks now support Google Play, the ability to run Android apps on older models is still limited. (A list of which select devices are able to run Google Play is available here).

In addition, users with devices whose screens are 10.1 inches or larger will need an Office 365 subscription to use the Android apps, ZDNet also pointed out.

Of course, Google’s G Suite is still the more likely choice for a number of Chromebook users, but the ability to use Microsoft Office on a Chromebook makes them a potentially more viable option for businesses using Microsoft’s software.

That could be one reason why Microsoft isn’t making a lot of noise about its Office Android apps now working on Chromebooks. The other is Windows 10 S – the streamlined version of Windows 10 the company is positioning as its Chrome OS competitor.

Microsoft hasn’t (yet) provided a comment on the news of the apps’ arrival. Google declined to comment.