As YouTube reels from a series of scandals related to its lack of policing around inappropriate content aimed at children, obscene comments on videos of children, horrifying search suggestions, and more, a new app called Jellies has arrived to offer parents a safer way to let their kids watch videos on mobile devices.

Jellies was built by Ken Yarmosh, founder of Savvy Apps, which has been making mobile apps for years, largely for clients like PBS, NFL, Homesnap, Navient, Levi’s, and others, in addition to passion projects like mobile calendar app Agenda and Today Weather.

As a parent, Yarmosh says he, too, was afflicted by the problems with YouTube that have recently come to light – namely, that allowing an algorithm to dictate what kids should watch will not lead to the safest environment.

“My oldest child is now five-and-a-half, but when he was two and three, he would love watching videos as many kids do,” explains Yarmosh. “YouTube became basically a non-starter because of the ads and him veering into things he shouldn’t very easily. Once YouTube Kids came out, I thought that would be the solution, so I kind of shelved the idea of Jellies,” he says.

But Yarmosh soon realized that YouTube Kids wasn’t working, either. His child was scared by videos for older kids (like one for “Hotel Transylvania 2”); he became obsessed with toy unboxings and egg surprises leading him to beg for toys; and he watched YouTube stars who demonstrated bad behavior, which impacted the way he acted.

These problems led to the creation of Jellies.

Its solution is complete human curation of video content, combined with a focus on videos that allow kids to explore their world, instead of being force-fed videos designed to promote consumerism, distraction, and bad attitudes. That is, the company’s selection of videos won’t include those with “ego-driven online ‘stars,'” the Jellies website proclaims, nor will it feature those where toys are unboxed or videos with inappropriate ads.

In fact, the app doesn’t include any ads at all.

The company instead chooses to generate revenue through a subscription model, charging $4.99/month for ongoing access to its video collection, which includes the addition of new video playlists on a weekly basis. 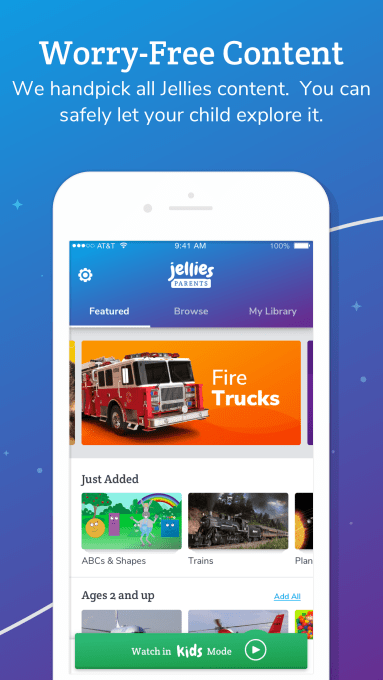 The video selection process is something the team at Jellies has thought about carefully. The company referenced The American Academy of Pediatrics (AAP) guidelines and age-range data from San Francisco non-profit Common Sense Media, to help with its curation process. This helped Jellies to figure out not just which videos make sense for which age groups, but also which topics should be included in its kid-friendly app.

For example, Common Sense Media suggests that videos inspiring creativity and imagination are important for children as young as two, while those that demonstrate good interpersonal skills – like sharing or waiting your turn – should be shown to slightly older kids. Videos that teach good values, like those focused on personal responsibility and ethics, can be brought in around age 5, Common Sense Media says. And older kids can be encouraged to develop critical thinking skills.

As any parent with a YouTube-addicted kid can tell you, the videos children watch can also influence their behavior. The kids begin to imitate the smart aleck-y, sassy YouTube personalities they see online, much to parents’ annoyance. Jellies’ position is that the videos children watch should demonstrate better behavior for kids to mimic. That means there are no YouTube stars on Jellies, and its videos are more educational than sensational.

To create the initial round-up of videos featured in Jellies, video viewers watched thousands of hours of YouTube videos to make sure they fit the company’s criteria. There are now over 3,000 handpicked videos across over 100 topics, with 4-5 being added per week, including seasonal topics.

Some technology helps with video selection, but ultimately human curation is the final deciding factor here.

“While we are developing tech to help, notice computers are last in our list. Yes, we get that the industry believes scale is important and values that highly or solely. We believe safety and quality are more important than algorithms that scale as of now,” says Yarmosh.

Beyond the more careful curation of content compared to what’s found on YouTube, Jellies also introduces a number of controls that put parents in charge of what the kids get to watch. Though a “Parents Model” option, moms and dads can select their kids’ favorite topics for inclusion in the app – like trains, planes, baby animals, sea creatures, and the like, for example. They can also add educational content, like ABCs and Shapes, if they choose, and remove other content as they see fit. 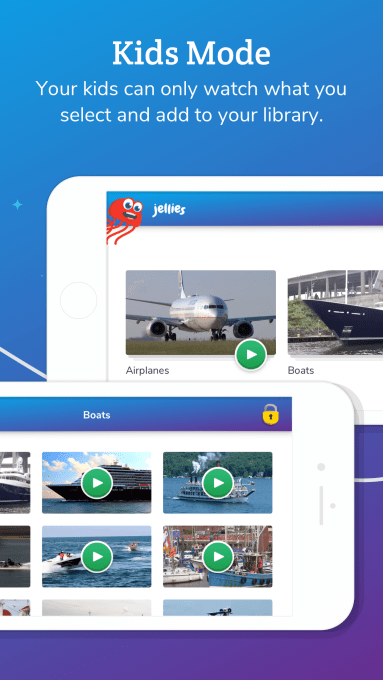 Meanwhile, children use the app in a special “Kids Mode” that lets them move between topics and explore videos, giving them a sense of autonomy even though they’re viewing only parent-approved videos.

Though Jellies does feature videos for school agers, not just preschoolers, it may be hard to pull older kids out of YouTube’s world after having been immersed for years.

It may be easier for parents with younger kids to just present them with Jellies, and never make YouTube watching an option.

A number of apps over the years have tried to offer curated versions of YouTube, but Jellies is hitting at a crucial time – when things have gotten so bad on YouTube’s platform that brands are even freezing their advertising due to its unsafe nature for children. That could help the app find an audience.

Jellies is a free download only on the App Store with the subscription available via in-app purchase.