Earlier today, November 26 2017, I was turned away from immigration at Shanghai’s Hongqiao airport by Chinese officials.

Alongside a number of other visitors, I had been waiting in line to take advantage of the city’s 144-hour ‘transit’ visa, which allows travelers with an onward flight to stay in Shanghai without needing to secure a visa before they travel.

The transit visa is issued on arrival if a visitor is not returning to the destination from which they arrived. For example, someone arriving from Hong Kong qualifies for the visa so long as their onward destination is outside of China but not Hong Kong. I flew in from Hong Kong and my exit ticket to Bangkok was booked for early afternoon on November 29, putting me comfortably inside the 144-hour limit.

As someone who has lived in Asia for nearly a decade, I’ve become accustomed to visas and the fact that, even when there’s another option, getting one before you travel is the best approach. In the case of China, however, I’ve long given up on the prospects of doing so.

Even though TechCrunch’s reporting aims to highlight promising startups and the role of tech in this modern and connected world, my status as a journalist in Thailand — where I live and hold an annual visa as a registered member of the media — has made getting a legitimate pre-travel visa for China impossible. The fact that I am from the UK — which doesn’t have 10-year visa options like the U.S. — means that one route taken by some reporters, who are able to get decade-long business visas, is not open to me.

Last summer, for example, I visited the Chinese embassy in Bangkok to start the process for a visa for our next TechCrunch China event in Beijing that November. Ultimately, I was told I was welcome to apply but that I would require a range of paperwork in addition to the usual documents, including approval from the municipal government of Shanghai and the mayor of Shanghai.

In order to make progress, I had a member of the embassy staff explain the requirements in Mandarin over the phone to an employee at TechCrunch’s partner company in China. I was later told by our partner that what was required was unclear and likely impossible to deliver on.

China, you see, will never reject your visa. Instead, an insurmountable wall is erected to prevent you from ever applying in the first place.

That’s where the appeal of the transit visa comes in. You simply book your flights to ensure you won’t overstay, then turn up.

Since 2015, I have used the transit visa system on six occasions. Even then, I’ve been nervous. Each time, I watched other travelers processed quickly after showing their documents, while I was kept waiting — one time for more than an hour as my bag ended up in lost property — as immigration officials looked over a computer screen (presumably showing my details) and summoned their seniors. Eventually, after waiting on the sidelines and watching travelers flow through with success, I’d be told I had been let in. 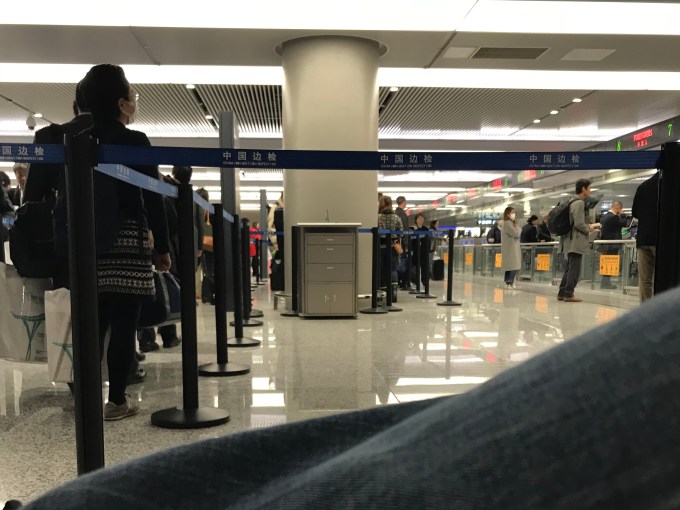 Travelers pass through immigration in Shanghai while I wait

This time however, starting at around 5:30 pm, the wait was noticeably longer than usual. A senior official returned after around 45 minutes, telling me I was to board a plane to return to Hong Kong.

I was permitted to stay for 24 hours under the shorter transit visa option, but my request to stay for three days — and not utilize the full 144-hour visa — would not be allowed.

The reason, as it was explained to me, was that in 2015 I had broken Chinese law when I failed to present myself to authorities in Beijing when I had visited and stayed at an Airbnb residence on two different trips. Unbeknownst to me at the time — and something that was not communicated by Airbnb — foreigners are required to register at a local police station, but in most cases the hotels where they stay handle this.

Therefore anyone using Airbnb, or staying with friends, must voluntarily visit the city’s police station and register. As anyone who has ever spent time in China and doesn’t speak the language will know, that’s challenging. But it is the law.

Even still, I was surprised. I used the very same transit visa on my last trip to Shanghai in June, and again in November of last year when I visited Beijing. This year, I was granted a visa on arrival (which is not a transit visa) to visit Shenzhen in June without trouble.

The immigration officers explained to me that a new law that had come into effect in recent months meant I was unable to exercise the longer transit visa. My previous visits were not subject to that, I was told. The officials denied my request for details about this new law.

The two incidents that they cited — from the first half 2015 — did indeed happen. However, it wasn’t until I was leaving Beijing Airport on the second trip that I was made aware of my crime. Two burly immigration officials pulled me to the side of the immigration queue and took my passport. They then berated me in Mandarin and summoned an English-speaking officer.

After some delay and an explanation of the police registration requirement, I was instructed to give information about my host. I provided her telephone number and name as requested. The officers made me sign a piece of paper that was written in Mandarin and, after I expressed concern that I would miss my flight, I was allowed to leave and get an exit stamp in my passport.

I made my flight, just, but the incident made an impact. Aware that Airbnb operated in a legal grey area in China at the time and concerned I might have put my host in hot water, I decided to stop using the service in China and contact her to ensure all was okay.

My host, who is Chinese, told me that she did indeed receive a call from the police who asked to know the nature of our relationship, including how long had she known me. She told them I had booked the room online.

I spoke to her after I left Shanghai yesterday and she recalled that her experience with me was “super weird.” As an Airbnb host for four years who has welcomed more than 100 guests, she said she had never had any problem like it with anyone else. She repeated her belief that I didn’t actually need a visa for short stay.

Back to Hong Kong

Back to the situation in Shanghai this weekend, faced with the prospect of being denied entry, I tried my best to calmly explain that I was only made aware of my rule-breaking the second time. Since then, I explained, I had made a point of only staying in hotels as I didn’t want to break rules. Plus, most importantly, I had since returned to China, been permitted entry, and complied with the requirement each time.

My plea fell on deaf ears, however. Perhaps angry at my efforts to argue my cause, I was informed that the senior officer had decided to remove my option for a 24-hour visa. I was told to travel immediately, I would not be admitted — period. I need to leave now, they said. The plane I had taken in from Hong Kong had been turned around and was ready to leave; this was the flight I was to be on.

The reason I was in Shanghai was our latest TechCrunch China event which runs for two days. This meant I would miss all of it.

Compounding my misery, Hong Kong Airlines, which I used to fly into Shanghai, then informed me I’d need to buy a ticket to leave, although I later ‘struck a deal’ to go back for free.

Exit agreed, I was then accompanied by a very tall security officer, who took my passport and escorted me and the airline representatives to collect my luggage and arrange my seat on the next flight at the Hong Kong Airlines desk.

I asked if I could take a photo with my chaperone to mark the occasion, but was told no. 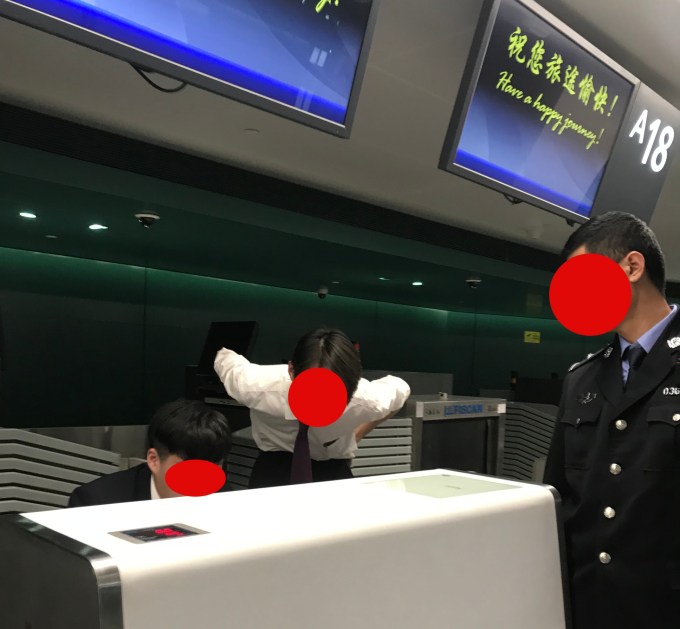 “Have a happy journey” — ground staff, airline staff and the immigration officer arrange my ticket back to Hong Kong

Ticket secured, I was escorted back through checkin and onto the plane — it was truly whirlwind — all while my passport was in the possession of my large minder. At the plane, it was briefly returned to me, but I was told that I had been given a seat on the condition that my passport was turned over to the Hong Kong Airlines crew, who would return it to me when we landed.

Options exhausted, I reluctantly agreed and, after holding the flight up significantly through my situation, I walked through a plane of disgruntled passengers glaring at me — the cause of their 90-minute delay — to take my seat in the corner at the rear of the plane.

One airline attendant had apparently heard what had happened to me and offered an apology.

“This is the Mainland, sir.”

I’ve heard stories of senior people at major global media companies being given transit visas on the condition that they remain inside the airport, and other such restrictions on political reporters, but I didn’t ever think I — a technology blogger — would join the club.

It’s hard to speculate on Chinese policy with any certainty. One thing I do know is that Chinese immigration have been aware that I am a “journalist” since I was given a tourist visa in 2015.

At the time, the official who granted me the visa told me that, even though I had applied for a three-month, multiple-entry visa, he would only give me a one-week visa. These are ‘special’ since they are not even among the options for travelers. His main concern was that I might write stories while on Chinese soil and, since he didn’t entirely understand what TechCrunch did, he wanted to err on the side of caution.

My experience this week shows that the level of caution has been raised significantly. I neither write investigative stories about the Chinese government, nor do I cover politics. But I am someone who is viewed as a member of the media. While in the past, there was some tolerance to us passing through, China has decided to get tighter still.

The fact that the 19th Congress has just taken place, thus making politics more intense right now, may be a factor.

Some might suggest that stories I’ve written on censorship in China may be a reason, but I’ve been covering thorny topics for some time, and it hasn’t ever prevented my entry into China.

It’s hugely disappointing for me because I always enjoy my (short) trips to China. It’s a great chance to see a different kind of innovation to the U.S., one that isn’t as well-understood or even reported on as the U.S.. Then there’s the opportunity to talk to young startups, huge $500 billion giants like Tencent, and those with designs on influencing Asia and other parts of the world. I’ve lost count of the number of events, company launches, and other story opportunities that I’ve had to pass on due to visa concerns.

Our objective is to shine light on these topics for our readers, but unfortunately the Chinese government is making that hard to do.