When you go through a big life event — say a milestone birthday for a parent or a wedding — there are probably going to be a lot of mini-events that happen before and after the big one. But you might not think to hire a professional photographer for them and stick with a couple phone cameras because it can be tough to find those photographers.

So Minted, a company that’s been around for quite a while and traditionally known for cards and stationery, is now launching a service to streamline that process and make it easy to summon a skilled photographer to document events like those. Though the process might be tied closely with, say, family portraits, it’s pretty easy to see how getting a photographer quickly ahead of a life event that there’s a good chance has a higher level of skill than you with your iPhone could convince people to pull out their wallets.

Minted users can pay around $100 to book a 30-minute session with a photographer on Minted’s platform, which vets its photographers to make sure they can deliver a certain level of quality. The photographers more or less have some creative freedom, but the important thing the company stresses is that they fit what the customers want. Users go through a short quiz or survey to ask what they might want as part of their photos — like what kinds of poses, or the photo effects at the end — and then it goes from there. After that, they’ll get retouched photos within a few days, as well as suggestions for things like holiday cards.

“What’s surprising is there are all these ancillary wedding events, like bridesmaids going out,” CEO Mariam Naficy said. “There are all things like, ‘we went to the salon together.’ There are all these mini-events under the wedding umbrella. They wanted to use photo-op because it wasn’t expensive. They trusted our brand. What we found, in general, was that there are lots of events in peoples’ lives that they’d like to have documented that they would use this service for.”

Naficy said Minted is able to take a slimmer margin on the process than a normal gig-focused platform might take because it offers those customers a way to use the content the photographers create in other products. So, if you wanted to create cards, you could pass the photos that these photographers create into other kinds of stationery — the kinds of things Minted is originally known for — all within a single service. Though people might not want to go through Minted specifically, it may remove enough friction to get people to stick around on the platform.

“I’m taking my store into the house, we’ll come take your portrait and also buy your card,” Naficy said. “In terms of where we go next and the innovation, I think it’s necessary for us to really meet the demand for today’s time-starved customer. I think it potentially could mean get out of thinking about stores and getting someone to your house. That’s how the conversation evolved. We started thinking about it in January or February, but we tend to launch things pretty quickly at Minted. We take an Amazon approach — we try it out and build it.” 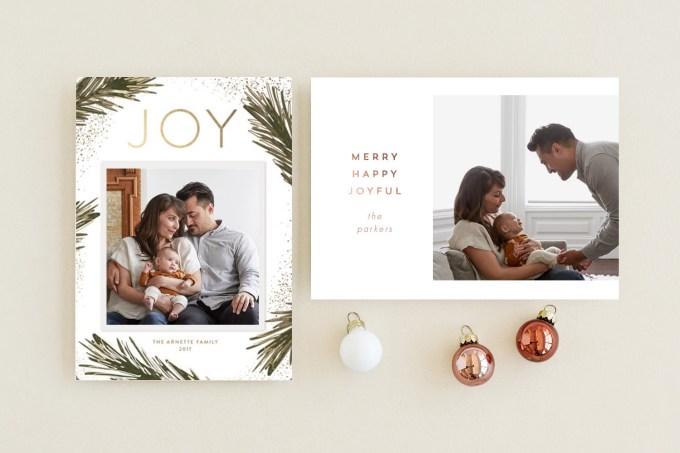 That roughly $100 price point (which Naficy is intentionally a nice round number because it helps convince users that it’s a high-quality product) isn’t necessarily set in stone, as she says the company is still figuring out the exact price point. But in order to convince photographers to get onto Minted when there are other platforms out there — especially as they have to go through a vetting process, which may involve taking test photos — it’s going to have to offer some kind of a compelling business opportunity.

“I think, the price point in general though is one where we can fairly pay the photographer and attract enough people,” she said. “This is an independent group of photographers — these are not minted employees — and we’re transforming people who have free time into staff photographers. So we have to set a price where we can fairly compensate people to attract the workforce and make some margin for us. It’s really hard to test price. If you ask consumers in a focus group about price, they’re often not very accurate.”

It’s all part of getting freelance photographers who might have a real set of skills and are even better than those that are already paid professionals an opportunity to turn that habit into a real business. (Minted reached out to clarify that the platform was not geared toward being better than current professionals, but about “making it more accessible to photogaphers and the consumer.”)

And the vetting process — ensuring that higher bar of quality — is part of the reason the company will be able to differentiate itself from other completely open platforms, Naficy said. Though other platforms likely make sure they have high-quality professionals (like, say, Thumbtack), Naficy said there’s a higher quality bar to ensure Minted users that are already coming to the site for those kinds of important life events are getting what they pay for.

That, and Minted will take weird requests like switching heads on different bodies.

“Our brand is really focused on great design and quality,” Naficy said. “That’s what we’re anchored in, our customers trust us for that. For years, I think many people who have not ordered from us, don’t realize we actually scale during the holiday with hundreds of designers. They join or the season and help edit all their cards. We photoshop a lot of photos upon request. They’ll be happy to do anything, we’ve been doing this for ten years. There’s an aesthetic sense at Minted as well as know how working and training large groups of professionals to provide a modern design look.”