Justice League, the DC cinematic universe’s answer to The Avengers, is finally here.

It comes at the end of a terrific year for superhero movies. Logan was genuinely great, while Wonder Woman‘s success should have demolished any lingering Hollywood skepticism about action movies directed by and starring women.

Plus, Guardians of the Galaxy Vol. 2 and Thor: Ragnarok were pretty good, and I’ve heard positive things about the new Spider-Man.

Justice League can stand alongside those movies. It’s not a home run — it is, at times, downright terrible — but simply by delivering a fun superhero story with likeable characters, it feels like a victory.

The movie occupies an awkward place in the DC universe, following the scathing critical reception of both Batman v. Superman and Suicide Squad. (Box office was solid for both films, though not quite at the level of Marvel’s biggest hits.) The company has been pretty open about its desire to correct course, rejecting the dour franchise-building of the Zack Snyder films in favor of Wonder Woman‘s more optimistic, self-contained approach.

Add to that a family suicide that forced Snyder (who’s still credited as director) to hand post production over to Avengers director Joss Whedon, followed by reports of extensive reshoots, and it seemed like DC might be rushing to retrofit a Zack Snyder movie into something cheerier, using Whedon’s trademark quips and banter. (Whedon now shares script credit with Batman v. Superman‘s Chris Terrio.)

To be clear, DC and Snyder had already been saying that they wanted Justice League to have a different tone from Batman v. Superman, and the first trailer (released long before Whedon’s involvement) emphasized the story’s humor.

Still, the rewrites and reshoots seem pretty obvious in the final film, which starts out mournfully as the world deals with the aftermath of Superman’s death, then turns to foreboding as Batman (Ben Affleck) and Wonder Woman (Gal Gadot) fret about an impending alien invasion while trying to recruit members to their superhero team.

Knowing the production backstory, you can’t help but notice that the best scenes are often brief and character-driven, with writing that’s sharper and funnier than the rest of the film. These scenes are extra distinct because they use cheap-looking sets or CGI as their backdrops. 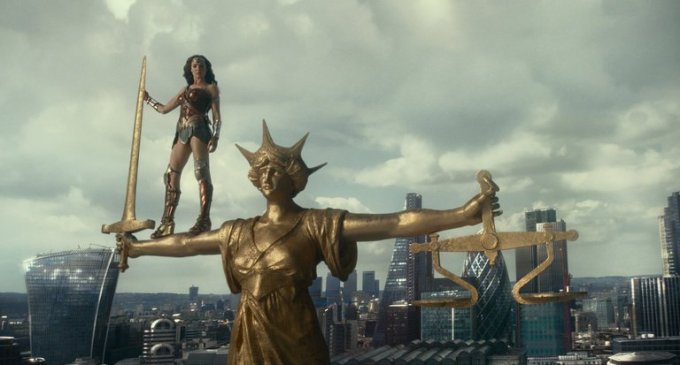 And then there’s Superman’s face. Since DC and Warner Bros. include Henry Cavill’s name in the opening credits, I don’t think it’s a spoiler to say that the character does eventually return to life.

Turns out, however, that this resurrection required Cavill to return for reshoots while also playing a mustachioed character in Mission: Impossible 6. How’d the filmmakers deal with it? They just erased his mustache with CGI — a decision that left poor Cavill looking wrong, somehow, like Superman’s face is just another special effect.

In fact, the whole film suffers from a general ugliness. Snyder has filled all his DC movies with CGI destruction, and even the finale of Wonder Woman (directed by Patty Jenkins, but with Snyder as a producer and story writer) turned into a tedious digital slugfest.

It’s fine that Snyder is going for something bigger and grander than realism. Unfortunately, the resulting action scenes just aren’t very interesting. Instead, we get weightless, cartoonish figures battling in a drab brown or gray environment, usually while buildings collapse just as weightlessly around them.

As for the main villain Steppenwolf — well, he’s also got a cool design (he’s based on a Jack Kirby character, after all), and there are some impressive moments when his enormous axe smashes against Wonder Woman’s sword. But he’s a total nothingburger as a character.

And yet, the movie worked for me.

For one thing, there’s something charming about the story’s simplicity. While many modern blockbusters (including previous DC films) seem determined to pack in more and more twists and plot holes while on their way to the same old beam-in-the-sky finale, Justice League‘s story can be summarized in just a few sentences.

Really: Steppenwolf is a conqueror from the planet Apokolips who seeks to remake the Earth by capturing three pieces of alien technology known as Mother Boxes. Our heroes, who are all bummed out for their own reasons, have to team up and stop him, becoming less bummed out in the process.

That — with a detour into Kryptonian resurrection, plus an undeveloped-but-appreciated subtext about overcoming our differences — is pretty much the entire plot. The whole thing’s wrapped up in a fast-moving two hours.

More importantly, the time that we spend with the Justice League is actually fun. Batman complains about getting old. Wonder Woman is as charming as she was in her own film (if a bit less funny). Jason Momoa gives us a gloriously badass Aquaman, even if he’s somewhat overshadowed by Ezra Miller as the Flash. (Understandable, since Miller gets the best jokes and has an amazing “What am I doing here?” facial expression.) And while Ray Fisher’s Cyborg is a weak link, it’s only because he remains a relative cypher.

Best of all, Superman actually smiles, acts heroically with minimal brooding and even cracks a joke or two. Yes, it took them three movies and one resurrection to get here, but we finally have a Superman who’s worthy of the name.

At this point, skeptical friends and colleagues might try to undermine my credibility by pointing out that I’ve defended Batman v. Superman. (Look: I think the movie is practically unwatchable, but in a way that’s almost admirable.)

1) It’s dumb to argue about which superheroes are better. 2) DC’s are better https://t.co/IMhTF3bP0h pic.twitter.com/h9K973b7OD

I can’t pretend to be a disinterested observer here. I read Batman comics religiously all through my teenage years, and the first Christopher Reeve Superman movie remains a personal favorite. More than any movie this year, I wanted Justice League to be great.

And no, it doesn’t achieve that. Whether it even counts as “good” will probably differ from viewer to viewer, depending on your affection for these characters. But I do have that affection, and Justice League leverages it quite effectively — right down to the music by Danny Elfman, which quotes John Williams’ Superman theme, and even Elfman’s own Batman score.

Ultimately, what I wanted was a movie that brought my favorite superheroes to life in an affectionate, entertaining way. Sounds easy enough, but most recent DC movies have failed that test. Justice League passes, quite comfortably.