“Fake news” and other misinformation, online propaganda, and satirical content people believe is true have filled the web via search engines and social media, and have caused a rift in how people perceive today’s news organizations and the quality of their coverage. A nonpartisan effort called The Trust Project is working to address this situation by helping online users distinguish between reliable journalism and promotional content or misinformation.

Today, a key part of that effort – called “Trust Indicators” – are going live on Facebook, offering easy-to-access, transparent information about a news organization’s ethics and practices.

Here’s how this will work in practice: starting today on Facebook, an icon will appear next to articles in the News Feed. When you click on this icon, you can read information the publisher has shared related to their organization’s “ethics and other standards, the journalists’ backgrounds, and how they do their work,” according to an announcement from The Trust Project. 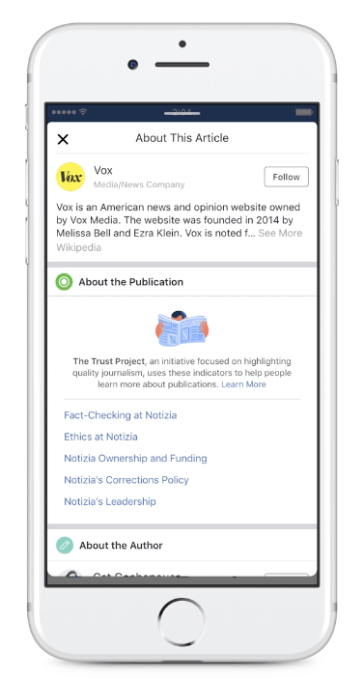 Facebook, Google, Bing and Twitter have all committed to displaying these indicators, though not all implementations are yet live.

On Google, the Trust Indicators will appear within Google News, Google Search, and in other Google products where news is found, the company explained in a blog post today. However, Google says it’s still determining how exactly the Indicators will be displayed. 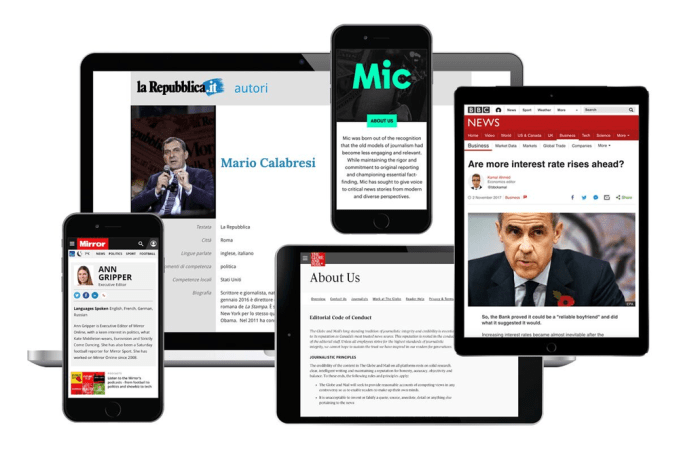 The Trust Project itself was started by journalist Sally Lehrman of Santa Clara University’s Markkula Center for Applied Ethics, and is funded by Craigslist founder Craig Newmark’s Philanthropic Fund, Google, the John S. and James L. Knight Foundation, the Democracy Fund, and the Markkula Foundation.

“In today’s digitized and socially networked world, it’s harder than ever to tell what’s accurate reporting, advertising, or even misinformation,” Lehrman said, in a statement. “An increasingly skeptical public wants to know the expertise, enterprise and ethics behind a news story. The Trust Indicators put tools into people’s hands, giving them the means to assess whether news comes from a credible source they can depend on.”

Specifically, The Trust Project has released eight Trust Indicators created by leaders from over 75 news organizations that will offer additional transparency about an organization’s ethics and practices.

These are as follows:

The first news organizations to adopt the Trust Indicators are going live this month, including The German press agency dpa, The Economist, The Globe and Mail, the Independent Journal Review, Mic, Italy’s La Repubblica and La Stampa, Trinity Mirror and The Washington Post. Haymarket Media Group will implement the indicators on three brands by year-end, and several more outlets will begin to display the indicators over the next six months.

On Facebook, publishers including Vox Media (select sites) and the AP are involved in its tests, but didn’t disclose the full list of publishers.

A WordPress plugin will also be available for qualified publishers.

The rallying cry of “fake news,” led by President Trump, has helped to erode some U.S. citizens’ trust in the media. Today, only one-third of Americans say they have either a “great deal” or “fair” amount of trust in news media, according to a Gallup poll. But this is not a problem that’s limited to the U.S. In the U.K., only 43 percent of people in a in a 2017 Reuters Institute said news could be trusted, a sizable drop from the year prior. Similar problems are experienced elsewhere, as well.

That’s why The Trust Project’s efforts are not U.S.-only – it’s working in collaboration with a consortium of news organizations worldwide.

The Trust Project’s efforts follow related attempts from major tech companies, like Facebook and Google, to handle the problems with the spread of misinformation and propaganda across their platforms.

Facebook and Google have both adopted fact-checking initiatives and other efforts in recent months, but these have been criticized as being “too little, too late,” to solve the problem. Misinformation can still go viral, while fake news writers can simply change URLs to avoid the “disputed” tag for their debunked content. And some early surveys show that the efforts may even be causing harm, as it stories without tags – even if false – are believed to be true, The Guardian recently reported.

The Trust Project’s Trust Indicators are a different matter, of course. Instead of labeling content as disputed, they’re allowing users to learn more about the organization behind the news and come to their own conclusions about the content.

Whether it will actually help in the long-run, of course, remains to be seen.