Airbnb, the accommodation and travel startup that is now valued at $31 billion, is today announcing an acquisition that points to how it wants to address the travel needs of more kinds of customers. It has bought Accomable, a startup based out of London that focuses on travel listings that are disabled-friendly. Along with the announcement Airbnb is refreshing its own accessibility features as the first stage in how it hopes to develop them.

As part of the acquisition, Accomable will be winding down its business, co-founder and CEO Srin Madipalli said in an interview this week here in London, as the startup’s team begins work on building out both more specific features for the Airbnb platform, and a community of hosts who can accommodate disabled visitors — and in turn, to attract more of those looking to book disabled-friendly travel.

This will start with accommodation for those in wheelchairs first, he said, with an invitation being extended to Accomable’s existing hosts to list on Airbnb as part of the transition. Accomable had amassed listings for 1,100 properties in 60 countries with details about step-free access, other accessibility adaptations and with photos to show it all to would-be visitors.

Over time, the idea will be to create communities for travellers with other accessibility needs, and potentially move into areas that are aligned with Airbnb’s own expansion into Experiences once you get to your destination, which is another important area of travel where those needing special accessibility have been underserved.

“It’s something that has frustrated me from the start, that we weren’t able to do everything for everyone,” Madipalli said. “One of the challenges in an early startup is that you have constrained resources, but within Airbnb we can diversify.”

And hopefully grow: he also added that one of Accomable’s biggest issues up to now has been that demand for places has far exceeded the supply of available listings.

Airbnb — which has booked accommodation for 260 million guests and currently features over four million listings — is coupling the news with some accessibility announcements of its own. While the company has offered the ability to search for whether a property is wheelchair accessible, the company now acknowledges that this wasn’t cutting it.

“Guests weren’t getting the information they needed to find the right homes, nor the confidence that the home they selected would actually be accessible for them,” Airbnb notes in a blog post. Now, the company is updating and enhancing this with more detail, including whether there is step-free entry to rooms, and if entryways are wide enough to accommodate a wheelchair. These search features are now live on the web version of Airbnb and will soon get added to its iOS and Android apps.

Financial terms of the Accomable acquisition are not being disclosed, after the startup raised less than $500,000, mostly from angel investors. For now, Madipalli will be the only one who is relocating to San Francisco, with the rest of the small team continuing to work out of London.

Accomable was founded in 2015 by Madipalli and Martyn Sibley, who together previously had co-founded a magazine and online community called Disability Horizons. The two friends are avid travellers but found that it was a lot of work to organise trips: both have Spinal Musular Atrophy and use wheelchairs.

In the very crowded market of online resources out there for tourists of other stripes, they saw a gap: planning accommodation, travel and activities around accessibility needs should be as straightforward as planning for any other need, they thought. And thus Accomable was born.

“The original idea we had was to solve a problem that Martyn and I specifically had,” Madipalli recalled. “We said to ourselves, ‘we can fix this problem with tech.'”

Madipalli (pictured below, scuba diving, on one of his trips) said that he and Sibley took their inspiration from Airbnb in the early days, not only in shaping their ambition to build a new travel platform from the ground up, but in how to go about doing it. 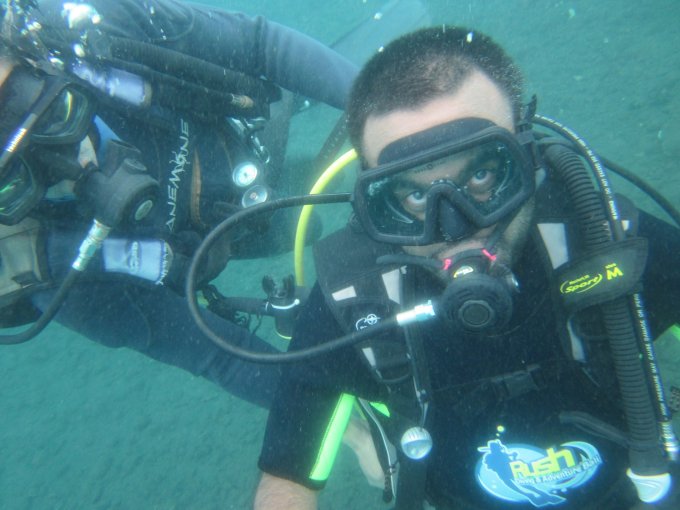 “I read about Airbnb’s founders staying with hosts in NYC,” he said in reference to how Airbnb’s early inventory came out of Brian Chesky, Joe Gebbia and Nathan Blecharczyk travelling and sourcing it themselves, since they were breaking new ground by building a network of spare rooms in private homes as a hotel alternative.

And so, this is what he did, too. “For months, I travelled around Europe with my care assistant, sourcing hosts in different cities using Twitter and Facebook, taking pictures and working out what makes a accessible listing,” he recalled. (Sibley left Accomable on friendly terms in 2016.)

The idea started small but gained more ground after Accomable raised a seed round of £300,000 last year from unnamed angel investors from the technology and hospitality sectors.

(Its previous funding had only been a £20,000 grant from the Skoll Centre for Social Entrepreneurship at Oxford University, where Madipalli had received an MBA, just one of a string of accomplishments: he also trained and worked as a lawyer, and before that got an undergraduate degree in genetics from Kings College in London.)

Accomable’s small team (seven at the time of the acquisition; five are coming to Airbnb) all either also have accessibility needs or are closely connected to people who do, Madipalli said.

The acquisition and what it will add to Airbnb underscores an interesting turn in how the company has been building its profile up to now.

Airbnb’s 4 million listings in private homes puts it higher than the top four hotel chains combined in terms of room count. As it has grown, the bulk of its battles have largely been regulatory: specifically whether it’s being taxed and playing on the same level playing field as the hotels it’s aiming to disrupt and compete with.

It has also been fending off some criticism from observers that its growth is slowing in some markets. Specifically, it has slowed down in the US, UK, France and Germany, according to a recent survey from Morgan Stanley, published to demonstrate that its impact on hotels won’t be as strong as originally projected.

A source close to the company confirms that Airbnb has remained profitable and broke $1 billion in revenue in the last quarter with growth at 50 percent and projected to reach 60 percent by the end of this year.

Airbnb has sought to match the criticism and regulatory pushes with attempts to demonstrate its positive impact on local economies. The shift to looking at accessibility is, in a way, in line with that.

The company has already had a policy barring discrimination against those with disabilities, but now admits that “it’s clear that we can do more to effectively serve people with disabilities.” In addition to the Accomable acquisition, Airbnb says it now has a dedicated team of engineers working on accessibility and has audited its platform to figure out what needs to be improved. They’ve focused on areas like color contrast and labels on icons for those who have visual impairments.