Philo instead is keeping costs down by focusing on a skinny bundle of programming with 37 channels, and the option to add more if desired.

The focus is on entertainment, lifestyle and educational content, not sports.

Philo is also open to adding on more content going forward, perhaps through genre-based add-ons, or with the addition of digital series. 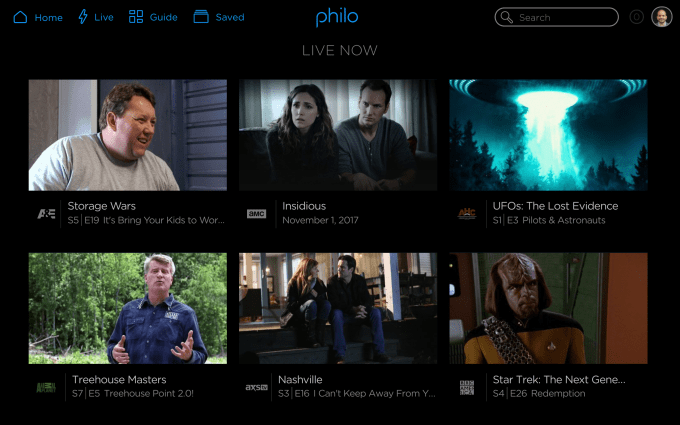 Like other services, Philo will work across devices, including phones, tablets, TVs, and desktop, and supports concurrent streams – in its case, up to three. It also includes an unlimited 30-day DVR for recording live TV. Viewers can pause live TV, start currently airing shows from the beginning, and watch programs that aired over the past three days.

A differentiating feature due to arrive in a future version of its software is an integrated social platform that will allow viewers to share their favorite shows with family and friends and even watch shows together.

This sort of addition could appeal to a younger demographic who already spend a lot of time “hanging out” together online, and watching TV on devices instead of in the living room.

Philo’s interface offers a simpler design that the convoluted Hulu makeover, for example, with large thumbnail images, and Home, Live, Guide and Saved pages for navigating through the content. Its guide resembles your traditional cable TV guide with network and show information in a grid format. And users can scroll two weeks forward or back to discover more programming.

Meanwhile, each show’s page includes all the options for selected shows, including what’s available to watch immediately, what aired over the past two weeks, and upcoming shows. With a click, the show can be saved which then makes its content appear on the user’s Home Page going forward. 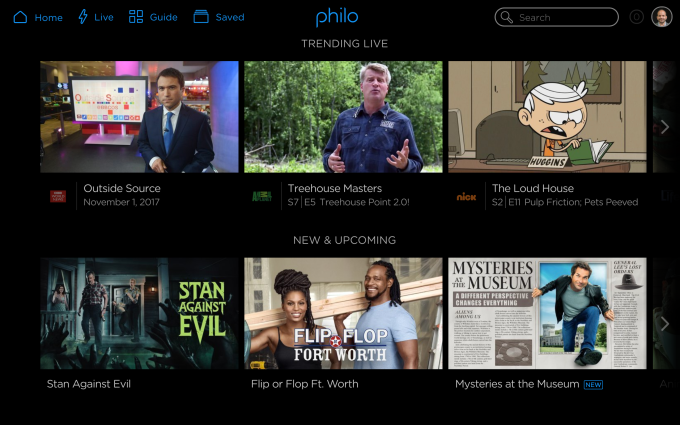 The company, which is led by Facebook co-founder Andrew McCollum, got its start as an on-campus internet TV service for universities, where it placed its own hardware connected the school’s video ingest, or at the local cable company’s head-end. (McCollum had joined Philo after initially angel investing in the startup and advising the company, and took the CEO position in 2014.)

The service for colleges today continues, and Philo aims to expand that business going forward, too. By year-end, it’s expected to reach over 70 universities.

“College was a great place to get started. It allowed us to reach the right demographic,” says McCollum. “Young people are really driving the change in TV, so creating a TV service that appealed to them, and worked for them was the right place to be.”

“Over 92 percent say they wish they could keep Philo when they leave, so we think we did that well,” he adds.

But beyond the ability to upsell the new service to exiting college students, the team feels there’s a bigger opportunity to compete among the growing number of over-the-top TV “skinny bundles” by coming in with a different lineup and lower price point.

“This type of package has never existed before,” McCollum notes. “It gives a whole new option to consumers.”

At the end of the day, Philo is betting on the fact that there’s a large enough demographic that will find other ways to watch sports, if they’re interested (perhaps ESPN’s streaming service, e.g), or just don’t care.

Still, many of Philo’s streaming rivals have added on support for broadcast networks like ABC, NBC, CBS, and Fox to complement their offerings, and Philo would have users turning to a digital antenna to access that programming. Plus, Philo won’t carry some of the channels some might otherwise expect a streaming TV service to have, like CNN, TNT or Fox News, in addition to sports channels like ESPN.

Despite the competition, Philo believes its package will be compelling and will grow over time with the market.

“I definitely think this will appeal to millennials. There are a lot of millennials who want to get their TV in a new way,” McCollum says. “While this is a crowded market, we’re much closer to the beginning of this than the end…There’s roughly 100 million traditional cable TV households. In five or ten years, almost everyone will use a service like ours,” he adds.

Philo works across TV (via Roku for now), iOS and Android mobile devices (on Android, via Chrome for now with an app coming soon), and the desktop web via Chrome, Firefox, Microsoft Edge and Safari. The social features will launch into beta early next year.