When goTenna put out their Mesh device earlier this year, I thought the off-grid communication gadgets would be great for an emergency kit or back-country hike. But it turns out that both I and goTenna underestimated how hungry people were for a resilient, user-powered mesh network: thousands of dedicated nodes now populate cities across the country, and volunteers are using them to get Puerto Rico back online after a devastating hurricane season.

The Mesh works a lot like the original goTenna, which pairs to your phone using Bluetooth, then uses walkie-talkie radio frequencies to send text communications (no cell network necessary) to another device paired to someone else’s phone — perhaps a mile or two away.

What the Mesh added was the ability to relay those messages: a chain or group of the devices will hear the message (it’s encrypted, of course) and pass it on until it reaches its destination. You can even set up your Mesh as a stationary relay, which in concert with other devices might let entire neighborhoods or even cities communicate, even in cases of a power or telecommunications outage.

I’ve always found mesh networks compelling, but I just sort of assumed they would emerge out of the proliferation of wireless devices we already have: phones, routers, laptops. But so far no one has been able to unify the clans and produce some kind of universal relay protocol. The goTenna Mesh, of course, is built for it out of the box. (I have a couple of units they sent me to review, but have only had the chance to test the most basic features.)

When I talked to Daniela Perdomo, founder and CEO of goTenna, around the time of the Mesh launch, a handful of early users had registered their devices on a map and forum the company started, called IMeshYou. The volume of users creating permanent nodes took the company by surprise, and both the map and Mesh firmware were updated to accommodate them.

“What I didn’t expect is that the long-term potential would be so obvious to other people so early on, this power to create your own networks,” said Perdomo. And sure enough, the map has exploded with devices. 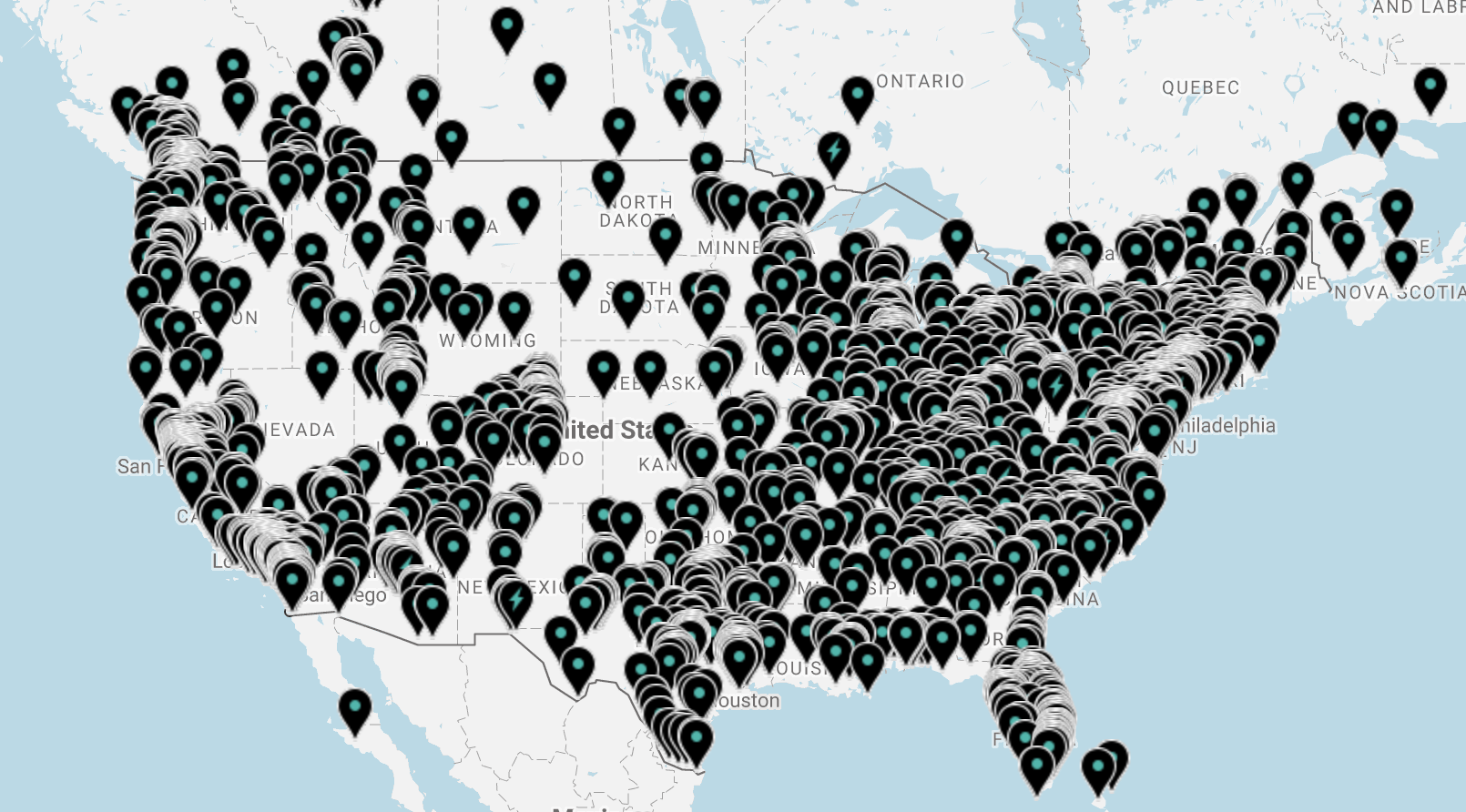 The exact number of nodes changes regularly, as only some are permanent “fixed relays” (indicated by a lightning bolt) and the others may come and go. But it’s clearly a popular use case for the people who have bought a Mesh device — numbering nearly 100,000 now, Perdomo revealed.

“The network layer we’re creating here is new,” she said. “Some people thought this was junk spectrum — but we can create an always available, bottom up, decentralized mesh network like this. If things go down, you can’t have Netflix, but you can say ‘hey, meet me here.’ ”

You could deploy it one time and forget about it; a solar-powered stationary relay will operate continuously or wait patiently until it’s needed.

It turns out that’s a particularly compelling use case when you live on, say, an island where the communications infrastructure has been devastated by a series of hurricanes. The company has embraced the opportunity to help the disconnected citizens of Puerto Rico, and to show the potential of a user-powered telecommunications network.

“After the hurricane, reports were that 93 percent of telecommunications were down, and I can tell you, it felt like 100%,” explained Javier Malavé, director of the PR Reconnects project. “I drove around and all the antennas were down, the satellite dishes were down, the transport and backbone layers were down.”

In other words, it wasn’t just about getting a generator to power up cell towers — generators and fuel were hard enough to come by anyway — even if you could, they wouldn’t be able to connect to the backbone. Especially in the inland communities where infrastructure was already tenuous, people were completely disconnected.

“If you don’t have backhaul, forget about Wi-Fi or internet,” he said. “After a little brainstorming, we thought the best solution would be something that can provide at least text communication in an area.”

He had heard of goTenna and decided to ask them for help; after a pilot campaign, goTenna and Malavé launched the PR Reconnects crowdfunding campaign on Razoo. Perdomo said that she was excited to be able to help out. (goTenna has also sent devices to Houston and the U.S. Virgin Islands.)

“Part of my reason for starting goTenna was Hurricane Sandy,” she said. “So it’s really personally fulfilling to see something that came out of a storm like this… you know, help people in a storm like this.”

They shipped down some devices to help Malavé and a couple of volunteers mesh up San Juan — no small task, he noted, owing to the way the city is constructed. 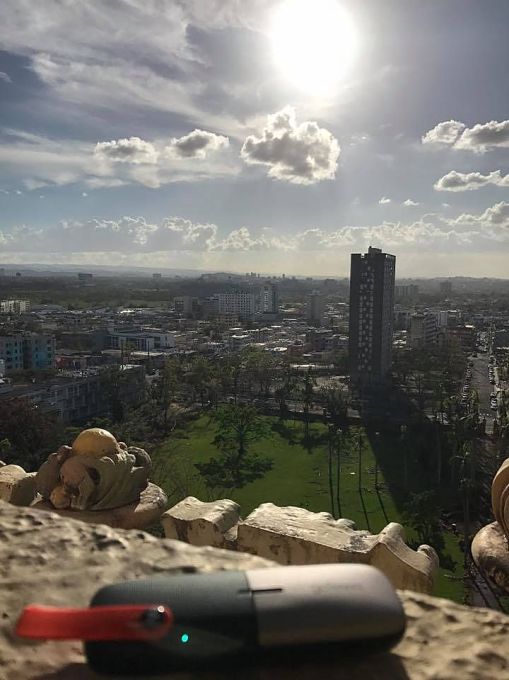 “In Puerto Rico we basically live in basically RF bunkers,” he said. If you just have an RF device in the living room of your place in the city, “the signal won’t even make it out of your house.”

“We had to actually map things out,” he continued. “We talked with an agronomist who drove us around and found spots where you had line of sight to other places. We went house by house asking people to let us have access to their roof to put a solar charger and a goTenna.”

Getting people on the app was similarly challenging. With no internet, they couldn’t download it, and while sideloading was sometimes an option, people are unlikely to just hand over their phone and say “Sure, attach your weird flash drive and load up some software I’ve never heard of.”

So they ended up having to cut the Gordian Knot: “We just bought iPod touches.” Expensive, but the idea wasn’t to get every single citizen back online, just restore some basic conveniences.

Barranquitas is a small town located in the mountainous center of the island, where lacking telecommunications the people were getting information around the old-fashioned way: walking. “The parish has this organic network of communication,” said Malavé. But a handful of goTenna devices in strategic locations made it so that, for instance, instead of walking 40 minutes to the hospital to ask for medical aid, a person could walk 3 minutes to the church, where they could send a message to the hospital instantly.

So far the volunteer group has a bunch of devices around San Juan and is working with a few smaller communities to set up small networks like the one in Barranquitas. They’ve also set up endpoints at places where connectivity can be relied on — a working satellite connection that can send text messages (the Mesh can act as an SMS gateway, sending texts coming from locations where there’s no signal) or connect to web tool APIs like Twitter’s. Like Perdomo says, it’s not Netflix, but in the aftermath of a storm, Netflix is pretty low on the list of priorities.

If you’d like to help out, feel free to donate to PR Reconnects or send over a spare solar charger or Mesh device if you have one.

Getting up and running

A very different approach to reestablishing communication, Google’s Loon project claims to have connected 100,000 people via balloons launched after the storms; but the balloons really act as a bridge between phones and distant, working cell networks. Lacking those (the backhaul Malavé mentioned), the system wouldn’t be able to do much — although in this case it looks like they were able to. But judging from the Google blog post, it looks like it was fantastically expensive to do and took weeks to get into action. 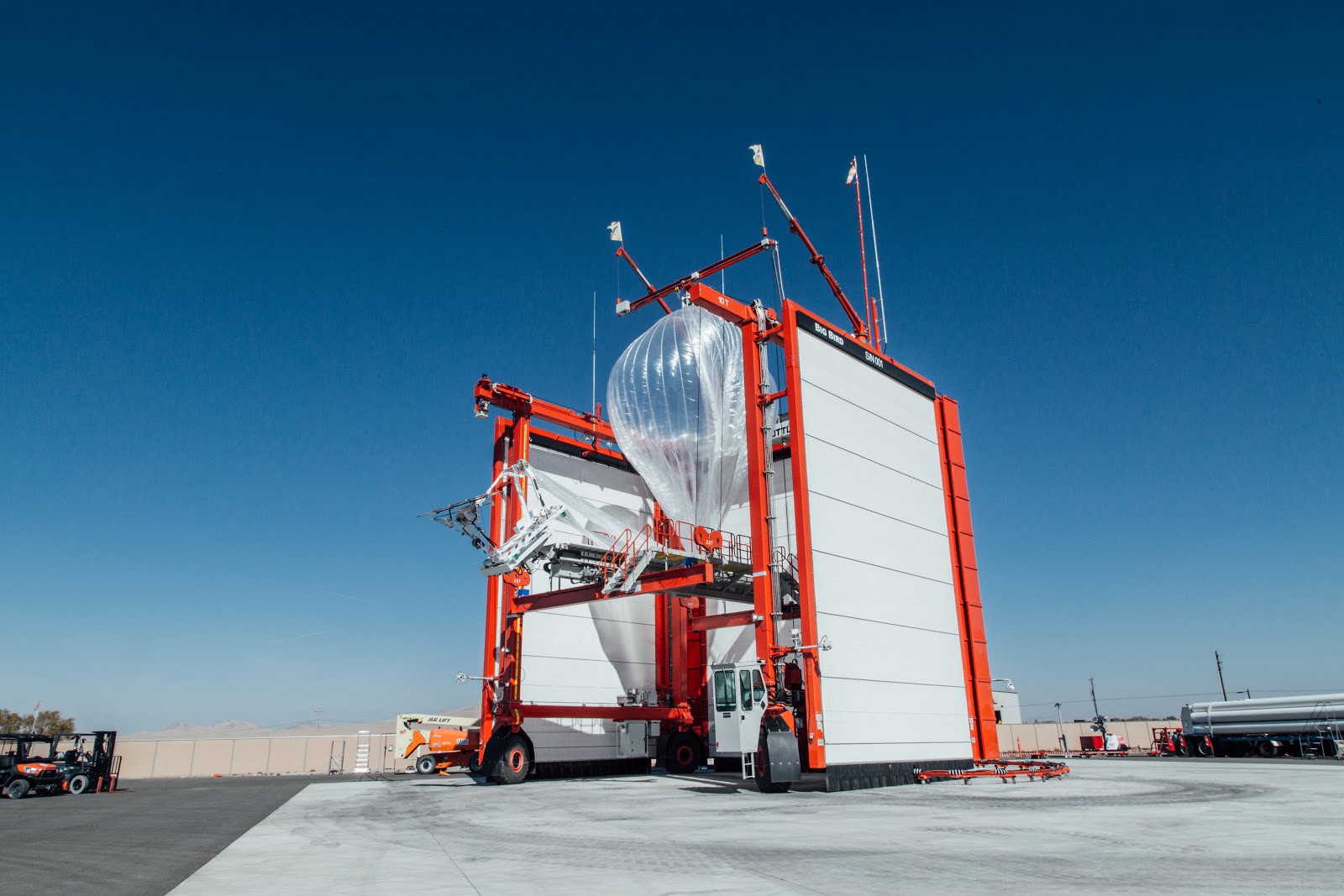 A one-time setup cost, perhaps in the tens of thousands, for a mesh network (goTenna or not) could provide an entire city and much of the surrounding area with basic text communication, one of the most critical capabilities following a natural disaster.

But perhaps we won’t have to: considering the popularity of the goTenna Mesh and the tendency of its users to buy three or four and set one up as a relay, it might be that major cities will already be meshed up by motivated users before the next storm hits.

“When disasters like this are in the mainstream consciousness, it allows us to have interesting conversations about infrastructure,” said Perdomo. “These events feel extraordinary, but really, they happen every day — and we should be asking questions about the resilience of our infrastructure. A key part of that going forward is distributed systems, wind and solar and all that, but people aren’t having that conversation about communications. No particular network is the be-all, end-all, but I think the future of communications includes a peer to peer layer.”

And perhaps in the end, Perdomo suggested, goTenna will actually make its own hardware obsolete:

“Today our phones don’t allow us to do what goTenna does, but we’re going to prove that they should be able to.”