Facebook is combining its Snapchat Stories clone with features Snapchat can’t match in a bid to boost usage. Starting today, users of Facebook Groups and Events will be able to contribute to a Facebook Story visible to the rest of the members and moderated by the admins. This could be fun for parties, weddings, meetups and more. In essence, these collaborative Stories will work like a private hashtag so multiple people can add content but only those involved can see it.

Facebook product manager Connor Hayes tells me the features “Give multiple people the opportunity to tell a Story from multiple different angles.” People will see Stories on their Event and Group pages, as well as atop their News Feed. They’ll be able to post while inside Events and Groups, or get the option to share there on the Facebook Stories share sheet.

Snapchat has its own private groups feature, but this is more akin to a group chat thread you can send Stories to. Facebook is enabling Groups around hobbies, professions, ideologies and locations to create niche Stories content that might not appeal to friends but is appealing to fellow members with a particular interest.

You can see how collaborative Event Stories work in the video below:

Meanwhile, Facebook is also launching Facebook Stories for its stripped app for the developing world, Facebook Lite. For now, users on the low-data-usage version of Facebook’s main app can only view Stories, but the company tells me posting is coming soon.

The announcements come alongside a big overhaul of Facebook’s Stories products. It’s replacing Messenger Day with Facebook Stories, and syncing both cross-posting and viewing. It’s also killing off the Facebook Direct ephemeral messaging feature in favor of handling Stories replies and messages via Messenger. 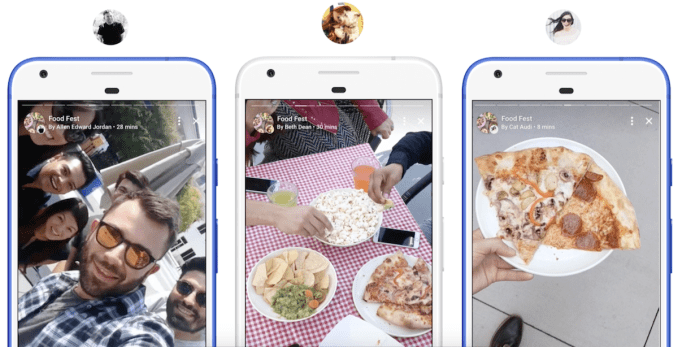 Facebook Stories posts will follow rules set by admins for the standard wall posts. So admins can either allow posts from everyone and delete ones they don’t like, or they can require approvals of posts. And to encourage people to kick off a Story, Facebook will show an open bubble atop the News Feed for you to add to if you’re RSVP’d for an event happening right now.

By integrating Stories with Events and Groups, Facebook has gone beyond copying Snapchat. And it’s proving that it’s serious about Stories for the long-run. Rather than just bolting on Stories, its intermingling the feature across the Facebook app. That could create sharing opportunities Snapchat lacks, spur usage by different demographics and encourage original content sharing rather than generic link sharing.