How old is venture capital? Probably as old as the first hunter/gatherer. Yet, until the mid-20th century, it was mostly practiced by wealthy individuals and families. Chris Columbus himself pitched various rulers for seven years until the Spanish monarchs eventually financed his first travel to “disrupt the spice trade.” Even the fee structure of “carried interest” — typically 20 percent of profits — is said to originate in the share that the captains of merchant ships would collect for goods carried during their perilous voyages to Asia and the Americas.

Modern venture capital was initiated by French-born American Georges Doriot in 1946, who founded the American Research and Development Corporation (ARDC), the world’s first publicly owned venture capital firm. ARDC’s first major success story happened when its 1957 investment of $70,000 (about $630,000 in today’s dollars) in Digital Equipment Corporation (DEC) became worth more than $38 million at IPO in 1966 (about $270 million in today’s dollars) — a 500 multiple and 100 percent IRR for the fund.

Since then, venture capital has not stopped finding new ideas to provide an edge for the success of entrepreneurs and themselves. We listed here some of the most significant innovations in financing startups, some of which are not strictly “VC.” 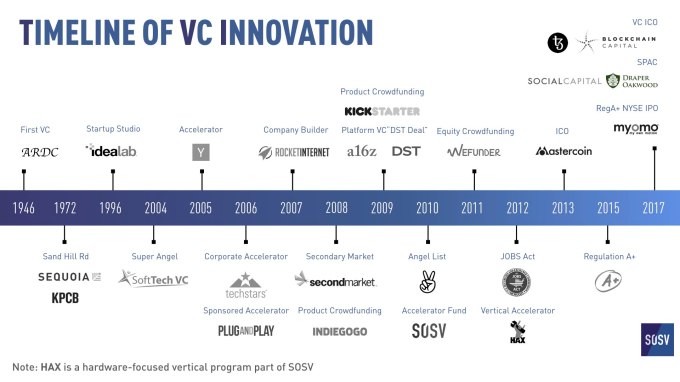 Business incubators were first launched in the 1970s, often associated with universities or state economic development organizations. Mostly real estate plays without investment, they concentrate startups in the same building with the hope that some intermingling will happen, some community will develop, helping all to thrive. Sometimes, like in the case of HBO’s Silicon Valley series, incubators will demand some equity from those who live inside their walls.

Since 2010, the co-working space model has prevailed over incubators. While highly successful business incubators like WeWork and Plug and Play also sometimes incorporate community building events, corporate events and lecture series like Startup Grind into their spaces, investment in these models is not the norm, it’s the exception.

In 2015, more than one-third of startups raising Series A graduated from an accelerator. It might be even higher in 2017. Accelerators are a big deal.

While they can be mistaken for a form of “business incubator,” startup accelerators are generally early-stage and hands-on forms of venture capital firms offering funding, advice and connections over an intense period — typically 3 to 5 months. Elite programs offer capital of between $100,000 and $250,000 in exchange for 6-10 percent equity and convertible loan notes (CLNs).

Few want to be “incubated,” but who would turn down “acceleration?”

Almost all accelerators (excluding Y Combinator) host their startups during their programs to maximize the interactions, skills development and network learning of their cohorts. Staff and mentors can easily offer one-on-one sessions, lectures and route visitors to the right teams. For funds investing beyond the accelerator phase (SOSV, for instance, deploys 75 percent of funds post-accelerator), co-location also allows for in-depth due diligence. 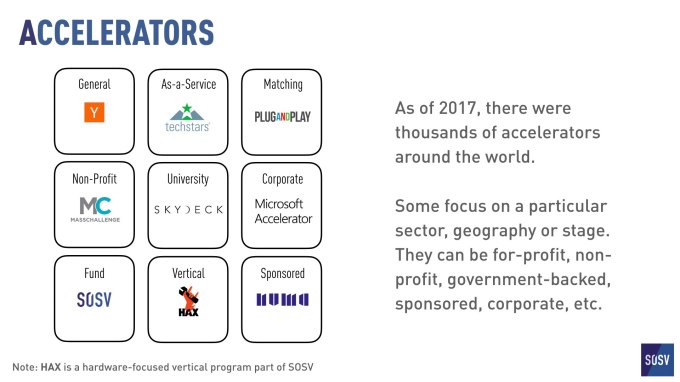 Today, several accelerator networks stand out by the number of startups they invest in, the amount of capital they deploy and the number of follow-on rounds. Y Combinator, the first and largest since 2005, remains the most famous generalist and graduates about 200 startups per year, while Techstars, 500 Startups, SOSV and Plug and Play each graduate close to 150 startups per year. Despite being early-stage, their scale requires funds in the hundreds of millions.

A tale of two (thousand) accelerators

In addition to the Big Four, there are thousands of accelerators worldwide, most of which offer much smaller investments. Also, many of those accelerators are government-sponsored “capacity building programs.”

In 2017, North America is host to an estimated 1,000 accelerators, and so is Europe. The count for Asia is not clear, but likely of the same order, with China being the behemoth since Chinese Premier Li Keqiang started promoting “Mass Entrepreneurship and Innovation” nationwide in 2014 (he seems satisfied with the progress).

Some firms have chosen to specialize (e.g. Starburst for Aerospace), focus on a region, operate as a nonprofit (e.g. Mass Challenge) or via sponsorship (e.g. Plug and Play Tech Center). A large number of universities (e.g. SkyDeck at Berkeley) and corporates (e.g. Microsoft Accelerator) have also launched their own programs.

Yet, the “accelerator” name is probably the most misused word in VC, possibly because the catchiness of the name and the lack of standards. Few want to be “incubated,” but who would turn down “acceleration?”

There is as much variation among accelerators as between community colleges and research universities. Some don’t meet the basic criteria of offering financial and intellectual capital in exchange for equity, or bringing later-stage investors to the table. Some are even for-profit operations offering no investment and charging a fee.

Launched in 1996, Idealab is a pioneering startup studio that gave birth to dozens of successful companies. In 2007, Germany’s Samwer Brothers launched Rocket Internet as a “clone factory,” adapting successful U.S. services in untapped markets. Typically the studio provides the initial funding and keeps a majority of the shares, while offering a meaningful minority to the founding team.

In 2009, China’s Innovation Works (now Sinovation Ventures) was started by the former as an early stage investor, incubator and “startup builder”. It later evolved to become a more traditional VC. (note: our initial article mentioned them as pioneers of the “copy-to-China” company-builder model with “mixed results due to harsh local competition”. Sinovation Ventures reached out to clarify that only a couple of companies might have applied this model, and that their initial “incubator” investments returned 9x in 2 years). 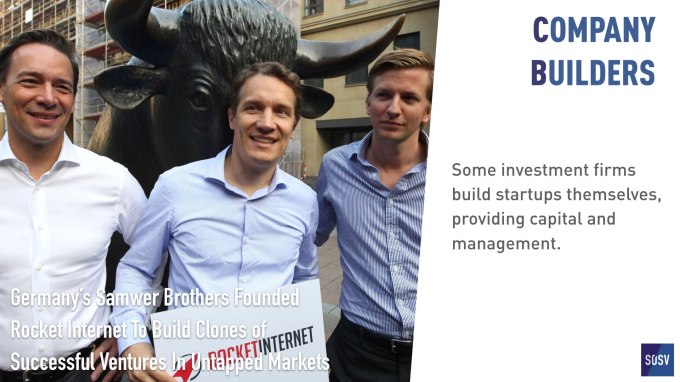 Investors often tout their “value-add” to entice founders, and some VC firms have formed support teams to help their portfolio with functions like recruiting, marketing, PR, design and more. 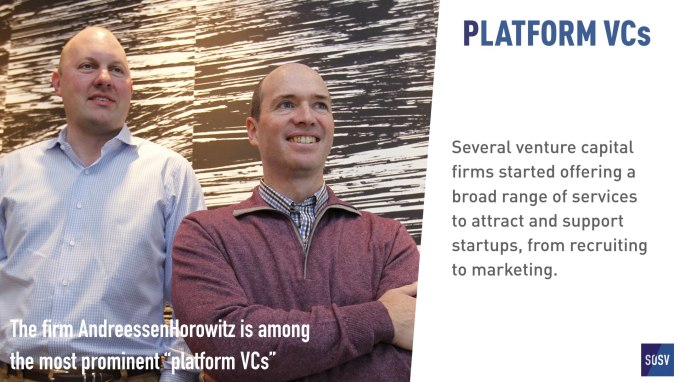 Today, Andreessen Horowitz and First Round Capital are among the most famous platforms. Some companies even offer “full-stack” support (our hardware program HAX offers expertise in domains such as prototyping, product and graphic design, electronics and mechanical engineering, manufacturing, marketing and sales and distribution). This saves time and money and lowers risks when going from lab to market.

Launched in 2010, this platform enables introductions between investors and startups. As of October 2017, $650 million had been invested in more than 1,700 startups. Since 2015 it also allows direct funding via its platform. 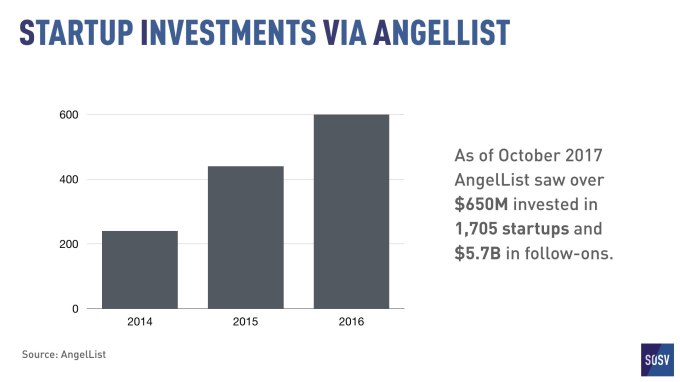 Product crowdfunding, while not a form of venture capital as it does not sell equity, has been a major addition to the early financing tools of startups, particularly in hardware. Among success stories are Oculus, acquired by Facebook for $2 billion in 2014 and Makeblock, an SOSV portfolio company building STEM robots that ran multiple campaigns and has grown to more than 500 staff.

Equity crowdfunding consists of the sale of company shares on a private exchange, generally to accredited investors. In 2012, the American JOBS Act was signed by President Obama. Further regulations A+, D and CF went into effect allowing equity crowdfunding. As of May 2017, the largest platform to date was WeFunder, which helped raise close to $18 million. By October 2017, the robotics security company Knightscope had raised more than $29 million, largely on the SeedInvest platform. 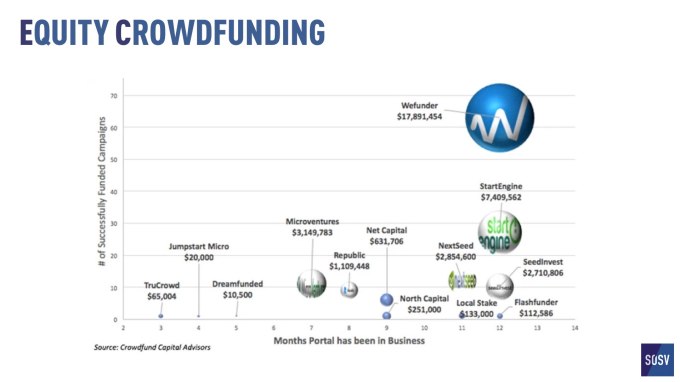 As of October 2017, cumulative ICO funding had reached more than $2.3 billion. While often compared to IPOs, cryptocurrency-based Initial Coin Offerings (ICOs) generally do not sell securities — which explain the general lack of regulation. Backers buy tokens giving access to a service. Those tokens can generally be traded on various specialized exchanges. 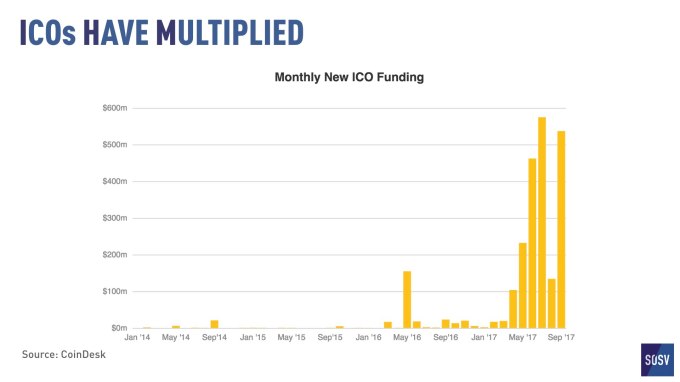 Most ICOs so far have involved a crypto-related startup, but the scope has expanded to include other companies such as smart hardware maker Lampix, which sold for 40,921 ETH worth of “PIX” tokens (about $14 million at the time). Some companies such as Tezos and Blockchain Capital raised new venture funds via ICOs.

Early liquidity allows startups and investors to avoid worrying about money or having to look for an exit prematurely during the ever-extending “private” life of the company.

While this doesn’t fall into typical VC, some firms have emerged as platforms to offer liquidity to founders, investors and/or employees. Such a platform, SecondMarket, was later acquired by NASDAQ to boost its Private Market offering.

Beyond new funding structures, VCs keep trying to find ways to ensure the success of their startups.

Chris Sacca, the now-retired founder of Lowercase Capital, is an investor who reached the No. 2 spot on the Forbes Midas List in 2017 and credits his success to aggressively purchasing pre-IPO shares from founders and employees.

Another firm called DST, lead by Yuri Milner, made the news in 2009 by acquiring a minority stake in Facebook from its founders and early employees at the then-shocking $10 billion valuation.

Many startup founders dread the time, cost and difficulty of IPOs. As a result, most startups (including the vast majority of unicorns) decide to stay private longer, thereby keeping their shares illiquid.

Special Purpose Acquisition Companies (SPAC) are “shell” entities that complete an IPO to raise capital that is later used to buy shares in a private company, thereby listing shares instantly. In September 2017, two companies, Social Capital and Draper Oakwood, raised, respectively, $600 million on the NYSE and $50 million on NASDAQ, with the intention to buy shares into a growth or late-stage startup. 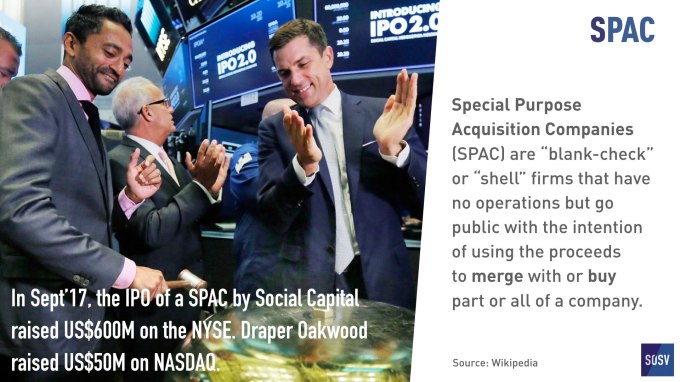 While some of the above innovations have not yet spread far and wide, we can still wonder at what 2018 will bring. Will “reverse ICOs” boom? Will the Long-Term Stock Exchange promoted by Eric Ries of Lean Startup fame take off?

Beyond new funding structures, VCs keep trying to find ways to ensure the success of their startups. In addition to hands-on support for strategy, product and business development, or going global, VC firms try to foster peer learning and involve communities of supporters early on.

Time will tell if investors can reconcile Sand Hill Road, Main Street, Wall Street and the rest of the world!

70 Years Of VC Innovation from HAX