If something scary or infuriating happens with your Uber, sending an email to support doesn’t always cut it. And if you’ve ridden thousands of miles with Uber and paid them boatloads over the years, you might expect better service. You’re always just a few taps away from switching to Lyft, right?

This week, TechCrunch spotted Uber testing new “Premium Support” features that the company then confirmed to us. Uber tells TechCrunch: “We’re running two small support pilots​. The first is beta testing a hotline available 24/7. The second is beta testing support from specially trained experts via our in-app support feature. Riders contact support through the app as they normally would, but receive faster, more personalized service.” 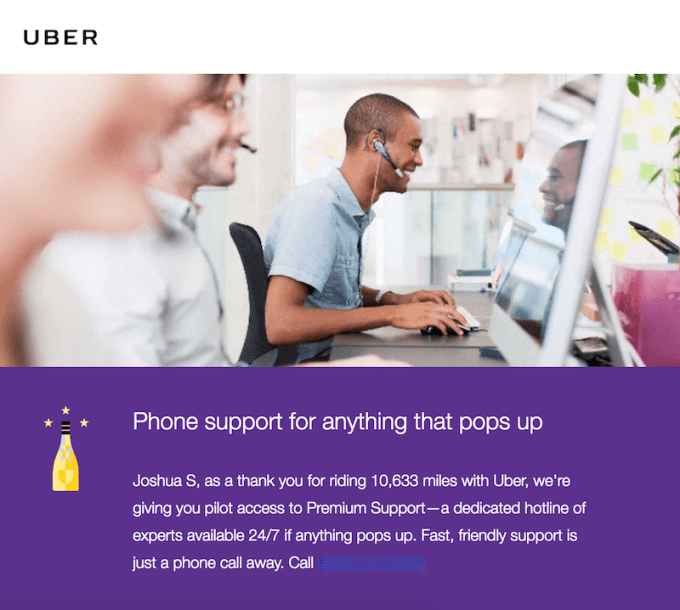 Uber tells me that for now, these are only available to “​a portion of our most frequent riders,” but wouldn’t say if there’s a miles or dollars-spent threshold. I got an email saying: “You’ve earned Premium Support . . . as a thank you for riding 10,633 miles with Uber, we’re giving you pilot access to Premium Support — a dedicated hotline of experts available 24/7 if anything pops up. Fast, friendly support is just a phone call away,” followed by the number.

Those with access can find a shortcut to the phone number or support experts in the Uber app’s help menu.

The hotline feature could be especially helpful if you’re currently in a problematic situation where even a swift email response won’t suffice, like if you’ve been in a car accident or wrongly dropped off in a dangerous neighborhood. Text-based instant support could be useful if there’s a problem with your driver and you don’t want to say so aloud on the phone. For example, if your driver is inappropriately hitting on you, threatening you, navigating recklessly, seems inebriated or is different than the driver who was supposed to pick you up.

The push aligns with Uber’s internal culture overhaul (“We do the right thing. Period.”), and 180 days of change initiative to improve the driver experience. That included a 24/7 phone support line for drivers, which Uber now tells me has been “very successful.”

Hopefully one day Uber can get to the point that all riders have access to an emergency hotline. But in the meantime, Premium Support is smart business.

Top Uber riders hold a massive lifetime value to the company, with some paying thousands per year for transportation. One bad experience could permanently push them to one of Uber’s many competitors. It’s nice when Uber sends you refunds after the fact, but feeling heard can go a long way to fostering faith in a startup you trust your life to. And with all of Uber’s scandals on and off the road, it needs to work harder than ever to build that trust.