Apple’s return to growth in the saturated China smartphone market was echoed by a report from IDC, out this morning, which attributes the rise in Apple’s market share to the strong sales of the new iPhone 8 and iPhone 8 Plus. Apple’s rebound indicates there’s still pent-up demand for iPhones in China, the report also noted. And it forecast the launch of the iPhone X will lead to especially high demand in the region.

That’s a different opinion than the report from Canalys out in late October. That firm had forecast Apple wouldn’t be able to sustain its growth in China, and said the pricing structure and supply of the new iPhone X won’t help Apple in the short-term, even if the new phone sees gray-market success in the region.

What’s not in dispute, however, is Apple’s revenue growth in China, which was confirmed by the company’s recent earnings. The iPhone 8/8 Plus’s launch had broken a streak of sales decreases that had stretched back six quarters.

Apple said that sales in “Greater China” grew by 12 percent year-over-year, to $9.8 billion. 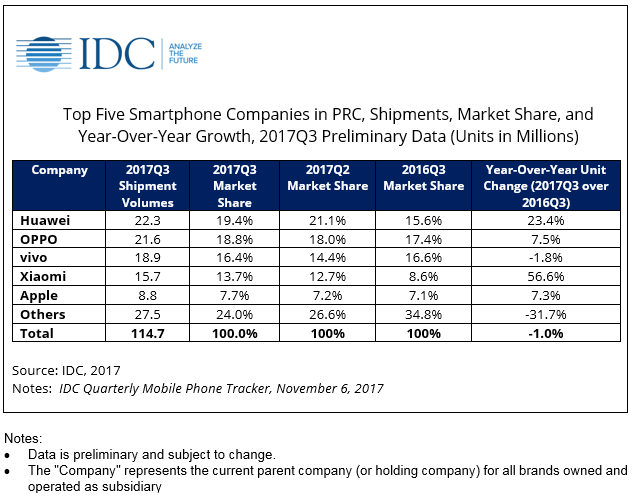 Largely, the new IDC report on smartphone market share in China was focused not just on Apple, but on the growth of the top five smartphone companies serving the region.

While overall growth of the smartphone market was flat (-1 percent year-over-year growth, compared with Q3 2016), the top five companies — Xiaomi, Huawei, OPPO, vivo and Apple — grew from 65.2 percent combined market share in the year-ago quarter to 76 percent share in Q3 2017. Of these, Xiaomi saw the strongest growth, up 56.6 percent year-over-year from Q3 2016 to Q3 2017.

The aggressive competition among the top five also has to do with how it’s getting increasingly difficult to convince consumers to upgrade their phones, IDC said.

Companies are finding it harder to launch phones with “significantly different specifications or new technologies” that convince consumers to go out and buy the new one, the report explained. Instead, the companies are often trying to gain market share from those rivals who are declining in the region, like Samsung and LeEco.

The battle for competition also comes at the expense of hefty marketing budgets, IDC noted.

“Even though the market is getting saturated in China, smartphone companies are still aggressive in trying to steal market share from their competitors. OPPO and vivo used to be the main companies with aggressive sponsorship of key television programmes,” said Tay Xiaohan, Research Manager, Client Devices Research, IDC Asia/Pacific. “However, we see increased aggression from Huawei and Xiaomi in this aspect in recent months. Xiaomi began sponsoring three popular entertainment programmes on television. With competition heating up, top smartphone players will need to either maintain or increase their marketing activities in the coming quarters.”

Xiaohan added that it will be more difficult for smaller players without large marketing budgets to keep up.

As for the iPhone X, not only does the launch in China seem promising because of how the iPhone 8 and 8 Plus performed — the device’s design also plays into a new and growing trend.

Many companies today are starting to focus on thin bezels or bezel-less screens as part of their marketing campaigns in China, including with the launch of Xiaomi’s Mi Mix 2 and vivo’s X20 in Q3 2017. Others, like Huawei’s Mate 10 and OPPO’s R11s, will do the same when they launch in Q4.

Though not specifically mentioned in this section of the report, the iPhone X is Apple’s entry into the all-screen movement, with a device whose marketing also heavily focuses on the fact that the new iPhone is “entirely screen.”

IDC did not estimate iPhone X sales, but said demand would be especially high mainly because of how different it looks from previous devices.