A new iOS app called Album+ is taking advantage of the increased AI capabilities and GPUs in modern iPhones to help people better manage their photos. The app’s features are similar to those found in something like Google Photos — it also can de-duplicate photos, for example, as well as categorize the people, places and objects it finds in your images. But the difference is that Album+ organizes and ranks photos using on-device, offline machine learning — there’s no need to connect with the cloud, that is.

This allows for increased consumer privacy, the company explains.

“We believe user content privacy will be the main concern for consumers over the next decade,” says Sam Sabri, head of growth at Polarr, the company behind Album+. “No one wants to upload their photos to a server that might leak their behavioral patterns to advertising companies, but most people still need the computing services provided by the cloud, such as image classification and search categorizations,” he says. “Our team spent a lot of time compressing AI models to make sure they can run fast and energy-efficient on mobile devices.”

The app also demonstrates how powerful smartphones have become.

Like Google Photos, Album+ can automatically recognize, categorize and organize the people, objects, places, documents and receipts in your photos. It can remove duplicate photos and other poorly shot images, as well as rank similar photos based on aesthetics. And it offers a variety of tools to help you do more with photos — like a collage maker, and a way to batch edit hundreds of photos at once to do things like apply filters, mass delete, etc. 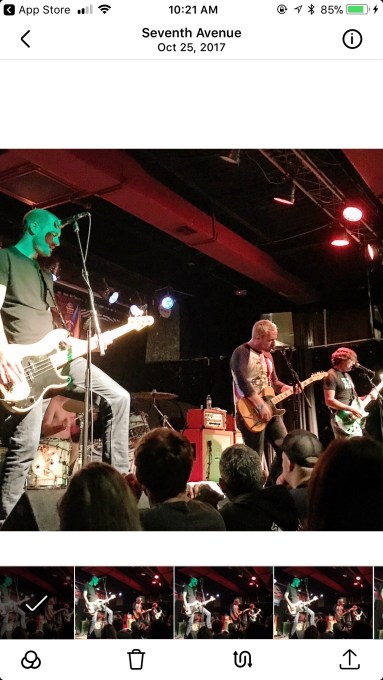 But what’s notable about the app is not necessarily its feature set alone, rather that it’s doing the work on the device.

Polarr is not new to the photo app market.

The company is already cashflow-positive thanks to its flagship product, Polarr Photo Editor, released two years ago. That app has 10 million users and landed on Apple’s “best of the App Store” lists in both 2015 and 2016.

In fact, the success of Polarr Photo Editor led to the creation of Album+, as the company already had a large data set on hand it could use to train its machine learning models. It combined this with public data sets to create its own machine learning technology that’s used to organize and classify iPhone photos.

Because its machine learning requires a more powerful phone, Album+ only runs on iPhone 6 and up. The app also uses different machine learning models that execute at a different speed and accuracy, depending on which device you’re using. On iPhone X, for example, the app will switch to iOS 11’s CoreML framework to run its fastest model, the company says.

The Stanford team of 10 worked on Album+ for more than six months ahead of its recent release. Apple has since featured it in the “New Apps We Love section” of the iOS App Store.

However, the consumer version may ultimately serve as a technology demo for Polarr’s developer-facing business. The company has also created an SDK to help other developers and vendors run AI offline on devices, and this is now in testing with a few partners.

For consumers, Album+’s full feature set, including unlimited photo indexing, is available via subscription for either $1.99/month or $12.99/year.

The app is available on iOS, iPhone 6 and higher, here.