Snapchat’s mobile app fell out of the top 10 for the first time this year during Q3 2017, according to a recent report from Sensor Tower. The app, which had been ranked at #8 during Q2 2017 dropped to #18 on iOS during the quarter, but remained ranked at #2 on Google Play. Combined, that gave the app an overall ranking of #5 for the quarter, the report noted.

Sensor Tower’s data was presented without context as to why this ranking change could have occurred. That may lead you to believe that Snapchat is losing steam.

Perhaps all that Instagram cloning is finally catching up with it? After all, Facebook recently announced that both Instagram Stories and WhatsApp Status now have 300 million daily active users – or nearly twice the size of Snapchat. 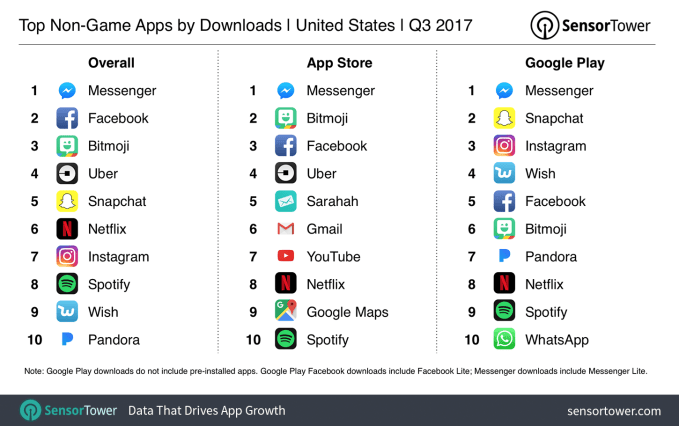 However, reading the top charts alone doesn’t always tell the full story. While it’s true that a slowing of downloads could see a popular app losing rank, that’s not always what can boot it from the top 10.

Sometimes, it’s not that one app’s rate of downloads slow, it’s that the apps surrounding it gain.

That’s what happened with Snapchat, we understand.

During the month of August, Snapchat fell to #16 on the iOS App Store’s top overall chart on August 19th, then to #33 on August 20th, according to App Annie’s data. The ranking began to stabilize the following day, where it returned to #7.

Of course, a drop of this size is still fairly notable.

App Annie says that Snapchat continued to have consistent daily downloads in the weeks prior and after August 19th and 20th, which were the only days in Q3 that Snapchat lost its top 10 position. What happened is that there was a surge of downloads from other top apps on those days instead.

When this happens, even an app with strong downloads can drop in the charts, and that’s why Snapchat fell.

The situation was not unique to Snapchat, either. In addition to its drop, some of the top ranking social networking and photo and video apps, including Instagram, Messenger and newcomer Sarahah, also saw their rankings decline during the same time.