Niantic, the company behind the hit mobile game Pokémon Go and its predecessor, Ingress, announced today it has acquired the team from the startup Evertoon to help it further build out its mobile products. Deal terms were not disclosed, but from how it’s described, the move seems to be more of an acqui-hire focused on gaining access to talent, rather than Evertoon’s IP.

Launched last year, Evertoon’s app was designed to help users make short, personalized films that could be shared out to social networks like YouTube and Twitter.

The app allowed users to upload a photo to use on top of a predesigned avatar, which they could then program to do certain things by typing emoji commands. For example, typing a thumbs up emoji would have the avatar perform that action, while a fist would have the avatar throwing a punch. Users could also upload their own background photo and add their voices to the videos. 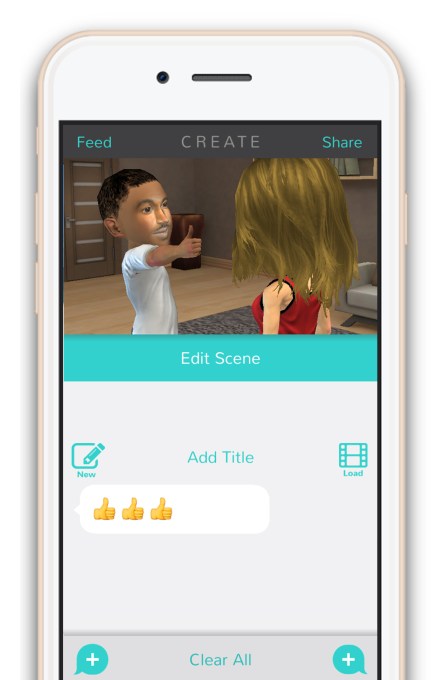 Evertoon has been live for 18 months, and during that time, people have used Evertoon to make animated fan fiction, celebrity satire, and music videos, the company says today in its announcement. The development taught them a lot about building a community and social experiences, it says.

Niantic’s interest in the toon-making app is less about the technical mechanics of creating these mini-movies, and more about the team’s engineering capabilities, as well as their understanding of social systems.

“Niniane [Wang, founder of Evertoon] and her team have been exploring innovative ways to add social mechanics to digital products. As our products and platform evolve, they will help build social systems that will benefit our entire community,” Niantic says in its blog post about the acquisition.

Evertoon’s team will be tasked with adding a social platform to Niantic’s  games, including Pokémon Go, Ingress, and its future titles.

As a result of being acquired, Evertoon will shut down its iOS application.

The app will go offline on November 30, 2017, though users with version 3.0 of app installed on their phone will still be able to make animated movies. However, the community component of the Evertoon product will be removed, and older versions of the app will cease working on the cut off date. If you want to save your previously created videos, you’ll need to download them to your device, the company says. (Evertoon’s FAQ goes into more detail.)

Evertoon was still a fairly small startup with just five employees led by founder Niniane Wang. Wang was previously at Google, which is how she’s connected Niantic and its leadership. (Google was home to Niantic before it was spun out.)

The company declined to discuss deal terms or IP, saying only that the “social mechanics” was the focus.

The full announcement, written by Niantic CEO, John Hanke, is below:

The Niantic family is growing, and we couldn’t be more pleased to welcome a great group of people who will help evolve, challenge and grow our company in new ways. Today I am excited to announce that we have acquired the Evertoon team, who bring with them a wealth of talent and experience in mobile products, tools for creativity, and community building.

Niniane and her team have been exploring innovative ways to add social mechanics to digital products. As our products and platform evolve, they will help build social systems that will benefit our entire community. We are also excited to have Niniane’s engineering leadership and team management skills, as our team grows.