As Google builds platforms like ARCore and Daydream that allow users to step into virtual worlds or put virtual scenes inside their phone’s field-of-view, there’s a big onus on game developers to craft the content that makes the platforms worth checking out.

Google is looking to make creators’ jobs a bit easier today with the launch of Poly, the company’s new home for 3D objects on the world wide web.

The new product dials in on Google’s mission to “organize the world’s information” and makes a one-stop shop for users to browse 3D objects and scenes created in the company’s virtual reality products like Tilt Brush and Blocks. The app was built with VR and phone-based AR platforms in mind. 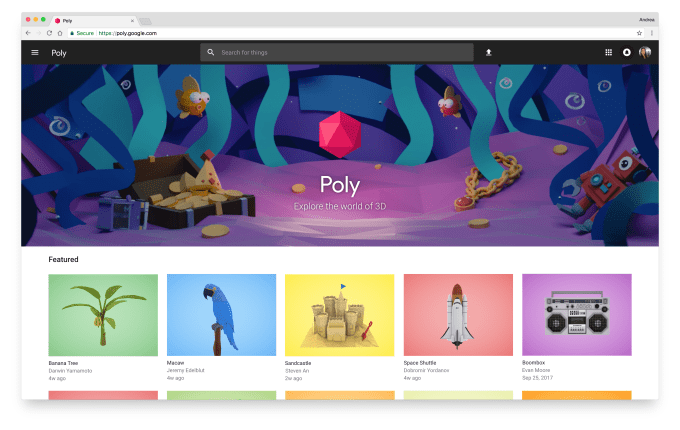 To kickstart users uploading content, Google commissioned artists to create thousands of objects, everything from an oven to an iceberg to a can of whipped cream so that the platform starts with a base level of utility for creators.

It’s an all-you-can-eat Creative Commons buffet as Google is focused (for now at least) on building a discovery platform stocked with freebies rather than one filled with creators hocking their 3D objects for cash.

Many of the objects you see featured will have the low-polygon style that are familiar in Blocks, the company’s VR 3D object creation app. Google says this is partially a stylistic choice, but it’s also a great fit for the company’s Daydream VR platform, which is often resource-intensive and will obviously run more efficiently when the objects it’s rendering are a bit simpler.

Moves like this that position Google more firmly in the camp of game developers are interesting ones for the company, which has generally approached that community in a more round-about way. Here, Google is adding functionality found in other places like the Unity and Unreal game engines’ asset stores, but is doing so in a way that seems to be very much additive to the experience of game devs.