Microsoft today announced that in December it will launch a Surface Pro with built-in LTE Advanced support to its business customers. Panos Panay, Microsoft’s corporate VP for Windows devices, made the announcement at the company’s Future Decoded event in London.

In the announcement, Panay argues that as the global workforce evolves, being a mobile worker will become the new default for many. “The office is no longer restricted to a set of buildings – it’s at home, in a café, a city across the globe, or on a plane,” he writes. “With so many changing locations your device becomes your office, and many of our customers tell us that’s what their Surface is to them – a mobile office.” 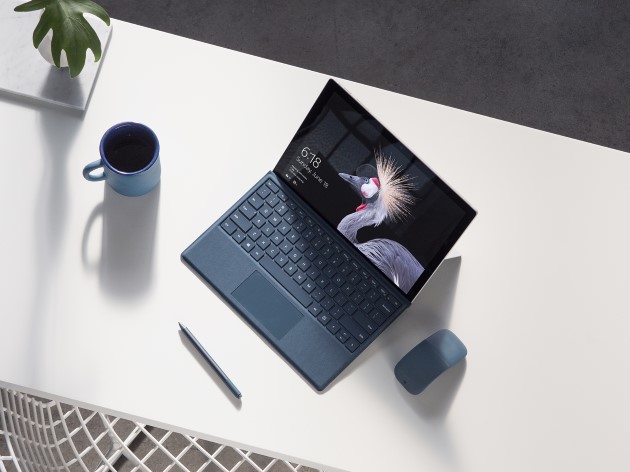 That’s obviously where the Surface Pro with LTE Advanced fits in. Microsoft says the new Pro will feature a Cat 9 modem and support for 20 cellular bands, so you should be fine in virtually any country in the world (assuming your roaming plan doesn’t bankrupt you when you use your Surface Pro with LTE Advanced to stream Netflix abroad). The promise of LTE Advanced is higher bandwidth and Microsoft promises download speeds of up to 450 Mbps, compared to about 300 Mbps for a standard Cat 6 modem you’d find in other current LTE-enabled devices.

All of that connectivity isn’t very useful if your device runs out of battery after half an hour, of course. For the Surface Pro, Microsoft expects 17 hours of video playback time. That doesn’t tell us much about how the device will fare with LTE enabled, but it should still be plenty of time for most use cases.

The most basic version of the Surface Pro with these new connectivity options (Intel i5, 4 GB RAM, 128 GB SSD) will set businesses back $1,149 and the one with an i5 processor and double the RAM and SSD storage will cost $1,449.