Live TV streaming service YouTube TV is now becoming available on actual TVs with the launch of dedicated apps for smart TVs, streaming devices and gaming consoles. Following its rapid expansion across the U.S. since its April debut, Google’s popular competitor to Sling TV, PlayStation Vue, Hulu Live TV, and DirecTV Now, is available to two-thirds of the U.S., including the top 50 metro areas, the company also notes.

Until now, YouTube TV has been available via mobile, desktop and casting, but did not have a standalone app for TV viewers.

In the next few weeks, it will also roll out TV apps for other smart TVs, including those from LG, Samsung and Sony, as well as an app for Apple TV.

Details around launch plans for other TV platforms, like Fire TV and Roku, aren’t available. (It will be interesting to see what YouTube’s plans are for Fire TV, given the battle between Google and Amazon underway right now, which saw YouTube yanking support for its service on Amazon’s Echo Show devices.)

As about other platforms, a spokesperson only responded that YouTube TV will “continue working to expand the list of partners.”

(We do understand that YouTube and Roku are discussing plans for a YouTube TV app. YouTube should announce an update on that timing soon. However, the plan is to be ready on all devices by year-end.) 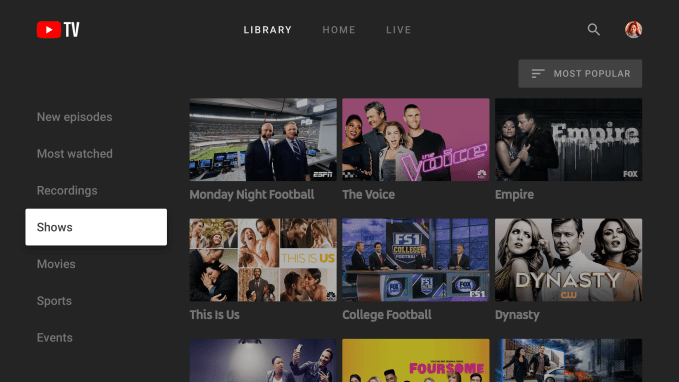 As for the new TV app itself, it’s a lot like its mobile counterpart.

As on mobile, it features the same three main tabs – Home, Live and Library.

However, the YouTube TV app for TV devices introduces a dark background instead of white for a more cinematic look, and includes a new Live guide so you can see what will be airing soon.

This guide resembles a traditional cable TV guide with its rows of channels and programming by time slot. That format is something that a number of live TV services have been adopting recently, including Hulu and Sling TV. (Apparently, the mechanism for live TV delivery may have changed, but the best way to find live programming is still this old school guide.)

While watching on the new TV app, you can pull up the player controls then flip through your Home, Live and Library tabs while the video continues playing in the background – a handy feature.

And of course, you can pick up where you left off when switching between watching on your TV and your other devices, as with other streaming services.

It would seem like addressing the big screen with a dedicated TV app would not have been one of YouTube TV’s earlier priorities, given its service is largely aimed a younger demographic who doesn’t watch much traditional pay TV, and tends to watch video on their phones and laptops. 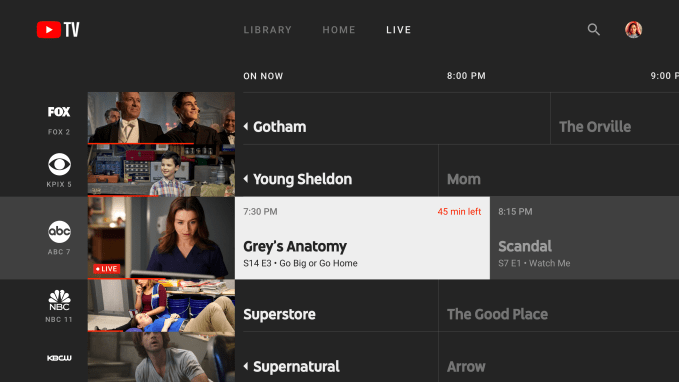 However, YouTube says that watching its service on the TV was actually a fairly popular activity, it found. Over half the time users spent watching YouTube TV was via Chromecast – that is, casting shows from mobile devices to a television set. And those who watched via Chromecast were highly engaged, streaming over 4 hours per day on weekends, for example.

YouTube TV’s strategy to reach a younger group appears to be working, so far. The company said earlier this summer that millennials make up more of its user base than any other demographic. In part, this is because YouTube itself is a hugely popular destination among this group. However, YouTube TV’s low price point of $35 per month and a lineup that includes YouTube Red Originals, also draws in the younger crowd.

The company declines to say how many users have actually signed up for YouTube TV. 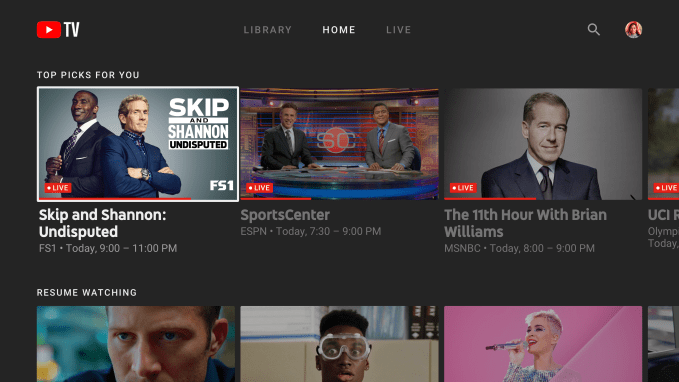 Data from various third-party firms, though, has indicated that YouTube TV is doing fairly well, considering its newness and the crowded market. In late July, for example, App Annie and Sensor Tower both said its mobile app had been downloaded approximately 2 million times. One market survey even found that YouTube TV had bumped Hulu for third place, in terms of paying users. It’s unclear how many subscribers YouTube TV really has, however, because research hasn’t been conducted on a broader scale. (comScore’s last look into over-the-top streaming only considered YouTube itself, not YouTube TV, when comparing services to leaders like Netflix and Amazon.)

YouTube TV isn’t available across all of the U.S. yet, but interested users can visit tv.youtube.com to check availability or to start free trials.