Far and away the question I get asked the most when I’m wearing a pair of AirPods is: do they stay in? It’s a fair question, and for the answer is, yes, but probably not for everyone. I like the wireless earbuds quite a bit, but they suffer the same issue as practically every Apple headphone before them — the hard plastic design is a bit unforgiving for different sized ears.

I haven’t had an issue getting them to stay put during workouts, and day to day use, but individual experiences may differ. That’s a disclaimer that ought to appear on every wearable review from now on. Samsung’s Gear IconX, on the other hand, are a different beast altogether. And really, that’s the beauty of them.

Samsung’s keenly aware of what’s driving wearable purchases these days, and it’s no coincidence that the latest version of its wireless earbuds appeared alongside the Gear Sport. Like its predecessor, the new IconX is explicitly built with fitness in mind. With that, comes swappable silicone tips and a rubberized loop on top that helps the buds stay put when going for a run — or just rushing to catch the subway.

But while fitness remains the focus this time out, Samsung’s clearly learned the most important lesson from the first generation IconX: a $200 bluetooth headphone needs to be more than just a fitness tool. For a majority of consumers, spending that much on a pair of earbuds comes with the expectation that they’ll do the job even after the workout is over. That means more than a rated 1.5 hours of battery life. The new headphones deliver there as well. 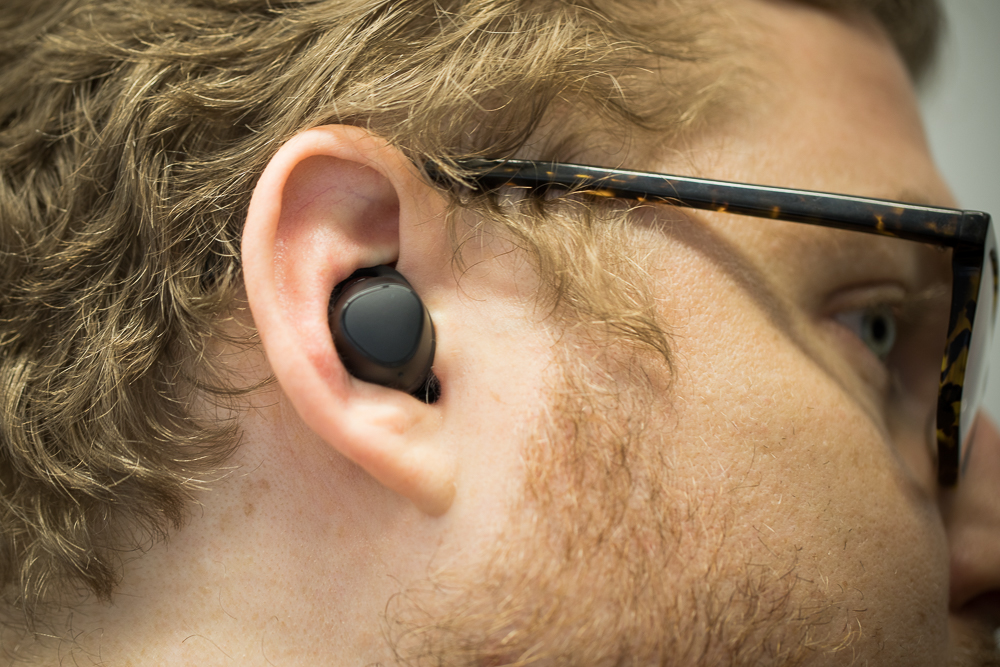 Samsung’s never been much for design subtlety, but the IconX (with the notable exception of the pink version), surprisingly, don’t go out of their way to stand out. The all-black model I tested, only butts out slightly when inserted into the ear, going mostly undetected. In fact, unlike Apple’s dangling white AirPods, no one stopped me to ask about the headphones when I wore them around. It was something that I appreciated mid-podcast, and a bucking of the traditional neon coloring fitness headphones.

Most of the IconX’s weight is distributed in the pod itself, rather than the AirPod’s long, hanging stems. That might be an issue during workouts, but the silicone loop up top nestles nicely into the ear, holding it in place. It’s a well-designed alternative to the plastic spikes of older exercise headphones. Frankly, I was a bit surprised that I didn’t have any issue keeping them things in place while going a few rounds with a heavy bag at the gym.

The headphones work on a similar principle as most other bluetooth earbuds, with a charging case to help them outlast their meager on-board battery. In all, you should get upwards on five hours of music playback with a fully charged case, or seven hours of stand by. Keep in mind, that battery will continue to drain if the headphones aren’t nestled firmly in the charging case. Even so, that should be enough last between trips to an outlet. 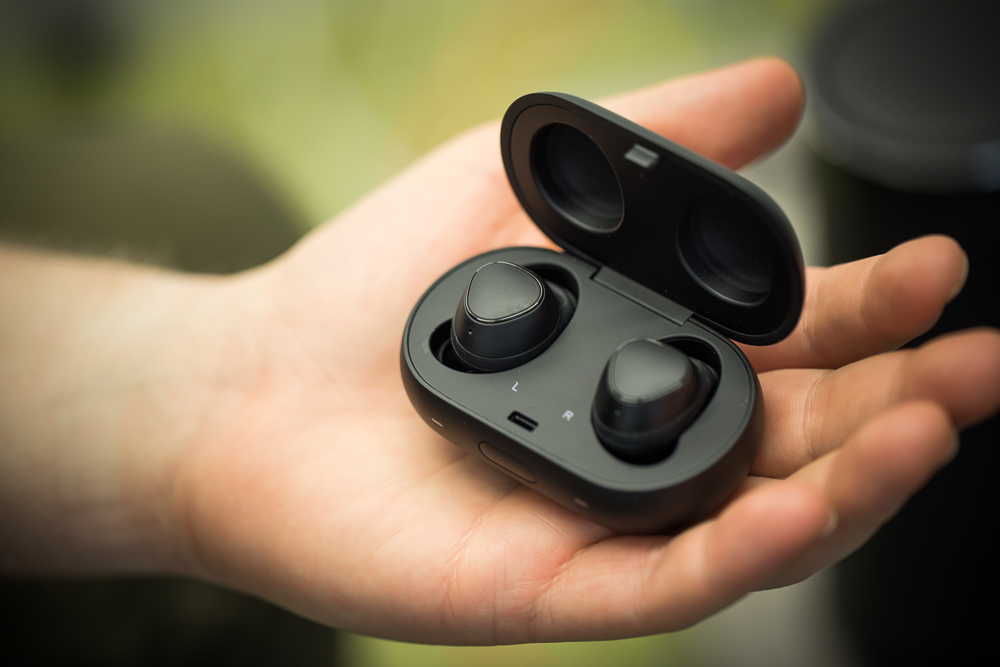 Part of extending battery life meant dropping the heart rate monitoring from the previous model. For the majority of users, I expect this won’t be a huge sacrifice. After all, most of those early adopters likely have some kind of wrist worn wearable, as well, so embedding that technology in an earbud was likely just a bit of gimmicky overkill.

The earbuds do, however, contain on-board voice coaching — a feature embraced by a number of these sorts of fitness headphones of late. It’s a nice idea, but one I’ve never found to be particularly useful in my own workouts. When it comes to pushing yourself, nothing beats a good song choice. And I found myself accidentally activating the feature a couple of times while I wasn’t working out and awkwardly fumbled to try to silence it.

The touch panel on the side is a nice feature as well. Not surprisingly, I found myself accidentally hitting that from time to time — though that’s just par for the course for this sort of technology. The control scheme also takes a little getting used to — no surprise, given the fact that there’s really not a lot of space to work with here. 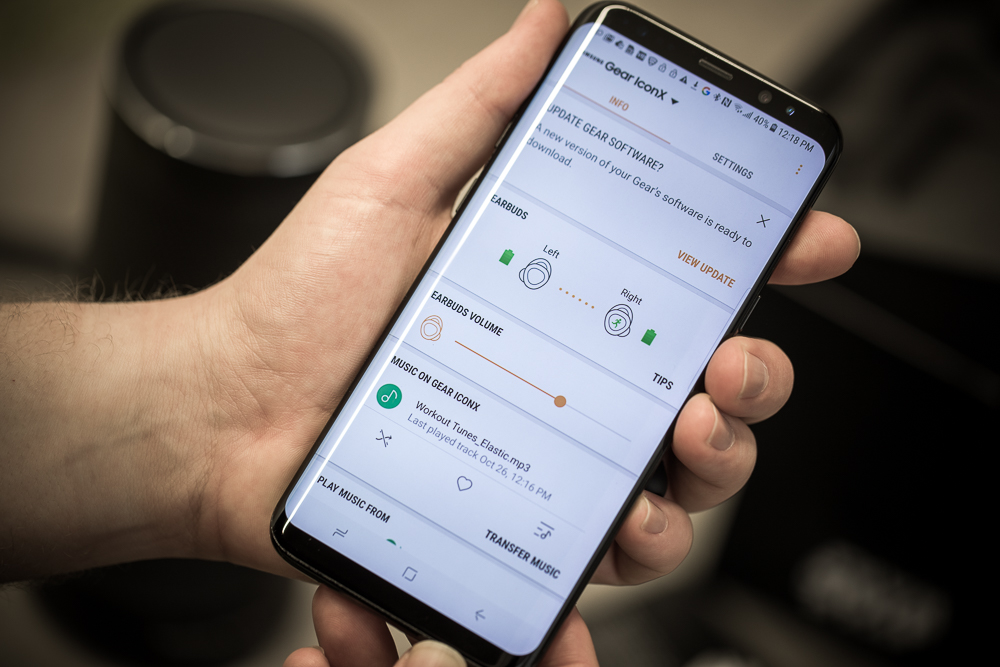 The pairing isn’t quite as magical as what you’ll get on an AirPod/iPhone combo, but it’s pretty seamless, once the button on the back of the case is pressed. Not surprisingly, like the Gear Sport, the IconX gets a few extra tricks if you use it along with a Galaxy handset, like the ability to transfer offline tracks via bluetooth, so you can leave the phone at home during a workout. Otherwise the process takes some dragging and dropping.

There’s 4GB of storage on the headphones, which can be used to keep “up to 1,000 songs,” by Samsung’s count. More than enough to get your through that daily run. Unlike the Gear Sport, there’s no offline Spotify capability for these headphones, and it won’t be coming during a future update. If that’s a big deal, I’d suggest holding out for the next generation, as those will almost certainly be getting that functionality.

The headphones use the same Gear app as the rest of Samsung’s wearables, switching between them is accomplished by a simple drop down up top. The app is fairly barebones, but it offers a good amount of info, including a track listing of what’s being stored locally and the battery level on each bud. 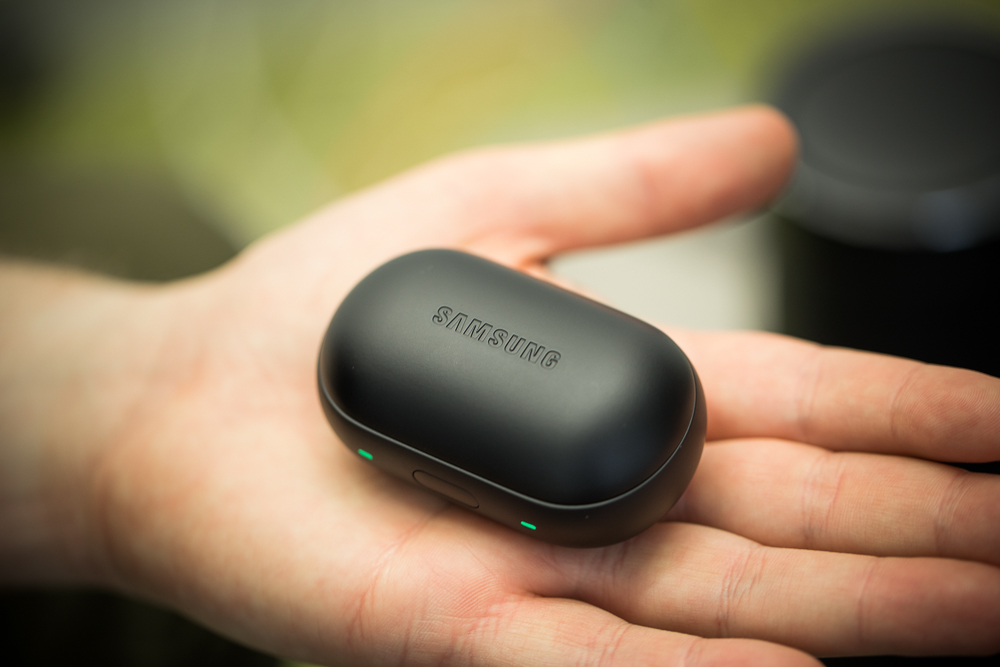 Samsung kept what worked with the initial IconX and mostly fixed what didn’t. The company didn’t try to give the world its own take on the AirPod, and that’s worked out for the best. The second-gen bluetooth earbuds are fitness focused much like their predecessor, but improvement on features like battery life help them transform into a product for everyday use — just as one would hope for a $200 headphone.

Usage hasn’t quite caught up to the seamlessness of Apple’s W2 chip experience, but those who already own a Galaxy handset will find a lot to like here, including offline music listening. And for everyone else, the IconX still stands out as one of the best pair of Bluetooth headphones around.