Instagram Stories is doing so well, the app wants to ensure you don’t just scroll by its Snapchat clone. Instagram confirms to TechCrunch that it has redesigned its mid-feed re-engagement box for Stories to show preview tiles of people’s slideshows that are twice as big as the Stories bar atop the feed. The box appears slotted between traditional permanent posts part way down the feed.

For now, Instagram says it has no plans to replace that smaller Stories bar you see above the feed with the larger design. But interrupting the feed to get people viewing Stories indicates just how crucial the ephemeral, full-screen sharing format is to the future of Instagram. 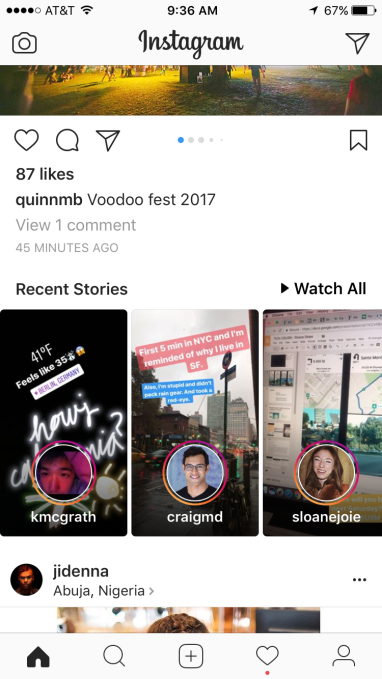 Social media pioneer Chris Messina first spotted the redesign over the weekend, prompting us to ask Instagram what’s up. A company spokesperson replied, “We recently updated the design of the stories bar that you see while scrolling through feed. This update makes it easier to preview the stories from the people and accounts you care about.”

The design is similar to fellow Facebook-owned Stories product Messenger Day’s initial layout before it switched to a less obtrusive version that uses round bubbles with smaller previews like Facebook Stories.

Instagram now gets two different swings at getting you to watch a Story. First, it shows the profile photos of friends in smaller circles right at the top when you open the app. This leaves the app enough room to simultaneously show the Stories bar and a full-sized square post below it before you have to start scrolling. Then mid-feed, it uses the preview tiles to tempt you to open Stories you’ve missed, in case what people recorded is more grabbing than their face.

Instagram Stories has 250 million daily users, more than Snapchat’s entire app. Rapid feature launches, slick design quality, fast loading and its combination with the already addictive Instagram feed has made Stories a massive win for an app with more than 800 million monthly users.

This old Stories bar design still appears at the top of the feed. But while it used to also appear mid-feed, it’s been replaced by the preview tiles.

Snapchat has refused to offer any kind of algorithmic sorting like Instagram Stories, instead showing the most recently added-to Stories first instead of those from your best friends. And with Stories cloned, Spectacles selling slowly, user count growing at a crawl and augmented reality filters becoming table stakes, Snapchat will need some serious innovation to keep up the competition against Instagram.

SnapMap, AR art and 3D characters like its Dancing Hot Dog may not be enough. Snapchat will either require a radically new feature or a fundamental reimagining of some of its core product philosophies like chronological sorting in order to gain ground. And even then, Instagram will be waiting to copy and refine what Evan Spiegel pioneers.